Headine in US Weekly, later Monday:

OK, so what’s going on here? Why would the New York Post print a story stating as a fact that Sarah Palin’s daughter was pitching a TV show without bothering to get confirmation from any of the alleged stars of such a show? They certainly must have trusted their sources. And who would those sources be?

One online commenter said of their reunion, “When you have no way to come up with $1,700 a month in child support . . . and there aren’t any other jobs out there . . . options are limited.”

Hmmm. “One online commenter”? Better make that one anonymous commenter at a notorious anti-Palin blog: 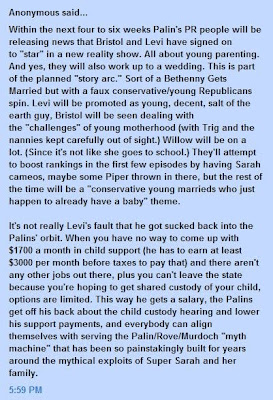 I’m reproducing the screen-capture of that comment because I don’t want to link the blog — which is the same blog that pushed the “Palin divorce” hoax in August 2009!

Yes, that’s right. A mere anonymous commenter at the “Immoral Minority” blog (operated by a disgraced former kindergarten teacher) qualifies as an authoritative source for the New York Post. How so? Apparently, after posting that blog comment, the commenter was quoted at the Gawker gossip site last week.

As I remarked last week, some reporters seem to have added a special clause to their ethical code for all stories relating to Sarah Palin: Any “source” is acceptable, so long as the source is anti-Palin.

Robert Stacy McCain
Follow Their Stories:
View More
Robert Stacy McCain is the author of Sex Trouble: Essays on Radical Feminism and the War Against Human Nature. He blogs at TheOtherMcCain.com.
Most Popular
1
Arts and Letters
The Ally of Executioners: Pushkin, Brodsky, and the Deep Roots of Russian Chauvinism
by Matthew Omolesky