Another Perspective,Top Story Trump,Virginia Amnesia in Virginia - The American Spectator | USA News and Politics
Menu
Another Perspective
Amnesia in Virginia
African-American delegates and senators from the state’s history should be remembered and honored in all their political fullness.
by James Thunder
An alternative commemoration ceremony at Jamestown. Image: YouTube screenshot 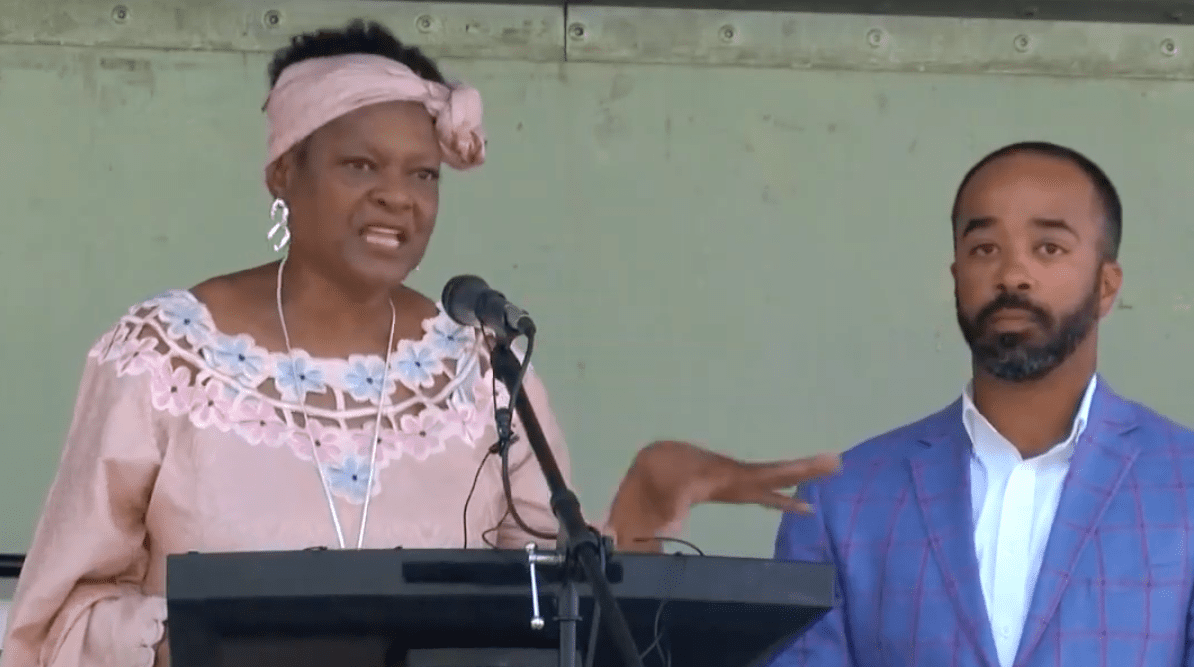 The Associated Press, the Washington Post, the Charlotte Observer, the Richmond Times-Dispatch, and undoubtedly other media outlets carried reports of President Trump’s July 30 visit to Jamestown as part of the 400th anniversary of the House of Burgesses’ first meeting in the British colony of Virginia. Their reports included an “alternative” wreath-laying by black lawmakers at plaques in the Virginia State Capitol commemorating the 24 African American men who were elected to participate in the Virginia state constitutional convention of 1867 t0 1868 (immediately following the Civil War), the 14 who were elected to the Virginia Senate from 1869 to 1890, and the 85 elected to the House of Delegates for the same time period.

These were brave men who exhibited physical courage in running for, and then occupying, these offices.

These men should be commemorated.

I would add John Mercer Langston (1829–97), if he does not already have a plaque. He was the first African American to serve in the U.S. Congress, from 1890 to 1891 (and was great-uncle of the poet Langston Hughes). See his autobiography, From the Virginia Plantation to the National Capitol; Or, the First and Only Negro Representative in Congress from the Old Dominion (1894).

I would also suggest that officials ensure that the plaques, and the names on the plaques, be made available in printed materials and on the internet. I did not find them on the National Park Service site, the Virginia State Capitol site, or the online brochure for high school students. We Virginians, we Americans, should thank President Trump for leading the African American legislators to bring these men to our attention.

A video of the wreath-laying shows only portions of the plaques, as shown below. 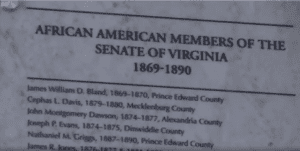 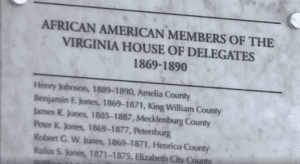 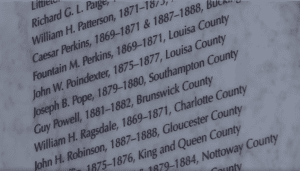 These plaques were installed in 2013. But none of the July 31 media reports, nor the 2013 report, mention the party affiliation of these men. This is the amnesia suffered by these African American lawmakers and by the media: Virtually all of the commemorated men were Republicans. None of them were Democrats.

It is right and good that recently a fuller story of various historic sites in Virginia and elsewhere is being told, a story that includes that of enslaved people. Such historic sites include Washington’s Mount Vernon, Jefferson’s Monticello, Madison’s Montpelier, Monroe’s Ash Lawn-Highland, George Mason’s Gunston Hall, the Lees’ Stafford Hall, and Georgetown University. Let me say that, likewise, it is right and good to ensure that the party affiliation of the African American men who were elected in the Reconstruction era should be mentioned in their story — along with why they were not members of the other party, the party of slavery, the party that would, after just a few years of freedom, doom them again, for a hundred years, to oppression, hatred, lynchings. As the Virginia Museum of History and Culture’s website states: “Black political advancement in Virginia largely ceased by the 1890s. The Democratic Party gained control of the government, and one-party rule began, lasting nearly a century.”

Let the news media and the tour guides draw the attention of the public to the biographical sketches of these men, showing their active membership in the Republican Party. Many of these sketches appear on the website of the Martin Luther King Jr. Memorial Commission’s Virginia African American Legislators Project.

Honoring the African American men who were elected in the Reconstruction era should not have been an “alternative” to being present when a president, much less a Republican president, honored Virginian democracy at the 400th anniversary in Jamestown. Rather, these men deserve their own ceremony, which any president, including Republican President Trump, would be honored and privileged to be invited.