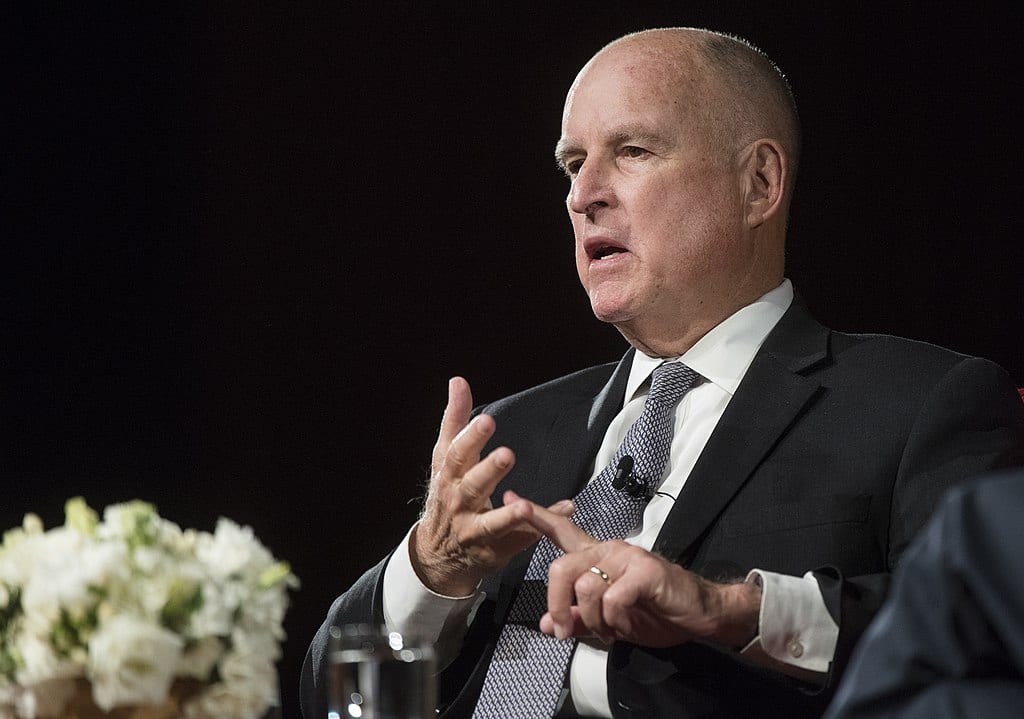 After California Republicans were obliterated in the November midterm elections, I’ve heard from a number of conservative-minded compatriots who are understandably worried about what the Democrats’ new super-duper legislative majorities will mean for the state. They’re not alone. In a recent interview with National Public Radio, outgoing Democratic Gov. Jerry Brown expressed his own concerns about where the state government might be headed.

“We’ve had a majority party, but I’ve been the governor who knows how to say no,” Brown said. “I think it’s difficult to say no. The next four years, it’s going to become even more difficult, because the weakness of the Republican Party has let the Democratic Party, I think, get further out than I think the majority of people want.” That’s something given that Brown — despite his willingness to occasionally nix new spending — has been somewhat “out there” himself, on policies ranging from tax increases to the construction of a $100 billion bullet train.

As the new legislative session approaches, here’s a list of a few issues to watch out for — and predictions about what lawmakers will do. ’Tis the season to be merry, but Californians need to temper their merriment with some reality checks.

Public servants remain our masters. The California Public Employees’ Retirement System (CalPERS) remains mired in debt thanks to years of retroactive pension increases for the state’s public employees. Despite years of boisterous returns (although the fund currently is in negative territory for the fiscal year), CalPERS is funded at around 67 percent, meaning that it only has a little more than two-thirds of the funds needed to make good on all its pension promises.

A recent Los Angeles Times article explains why California has been unable to do anything about these unfunded liabilities — and why public services here continue to decline. For instance, the article reports that Los Angeles offers “such generous retirement pay that they exceed pension fund limits set by the Internal Revenue Service, saddling taxpayers with additional costs… using money that could otherwise be tapped to fix sidewalks, fight homelessness or hire more cops.” Brown modestly reformed the pension system and has argued, in a crucial case before the state Supreme Court, that pension benefits can be trimmed going forward for public employees. But one of incoming Gov. Gavin Newsom’s top advisers comes out of the California Labor Federation.

Prediction: The new administration and union-dominated state Legislature will ignore the pension-funding crisis, local governments will continue to cut back services, and taxpayers will face an unending sea of tax hikes (dressed up as public-safety or community services taxes) to make up for the shortfalls. Things will have to get dire before public employees take a haircut.

Business as usual as businesses flee. An extensive new study from business relocation coach Joe Vranich, who fled Southern California for Pennsylvania, finds that “1,800 relocation or ‘disinvestment events’ occurred in 2016 (the most recent year available), setting a record yearly high going back to 2008 — and that about 13,000 companies left the state during that nine-year period.” The main reason wasn’t even the state’s punitive tax climate but a “legal climate (that) has become so difficult that companies should consider locating in jurisdictions where they will be treated fairly.”

Speaking of that bad climate, the California Supreme Court in April, in Dynamex Operations West, Inc. v. Superior Court, imposed a stringent new test on California companies that increasingly rely on independent contractors as regulations and mandates for full-time workers become so costly. Unless the new governor and Legislature address that issue, we’ll see the cost of employment here go up by approximately a third and unemployment to increase. The business community has implored lawmakers for relief. There are plenty of simple market-based fixes that would make it easier for contractors to more cost-effectively buy healthcare and other benefits.

Prediction: Given that the case threatens the state’s tech economy, the Legislature might do something, but it will have a tough fight to do anything meaningful as organized labor already has introduced a bill to codify the new Dynamex standards.

Redevelopment rises from the grave. In the midst of a budget crisis in 2011, Gov. Brown and the Legislature ended the state’s noxious system of “redevelopment.” Think of it as a locally controlled version of those 1960s-era urban-renewal schemes that destroyed so many neighborhoods. City councils would declare an area to be blighted, float bonds, pump subsidies into the area, use eminent domain to clear away properties on behalf of private developers — and then collect the new “tax increment” and sales taxes that would come from the new developments. It became a scheme to divert tax dollars from traditional public services into projects favored by city planners.

The Brown administration didn’t shutter the agencies because of any apparent concern about crony capitalism, but because it faced a massive budget shortfall. These agencies were siphoning off 12 percent of the general-fund budget. Since then, redevelopment has crept back in limited fashion. This year, Assembly Bill 11 would bring it back in close to its full, er, glory. It’s another example of how surpluses — the state has nearly $15 billion in excess — are the source of some of the state’s worst policy making. Only in bad economic times are lawmakers forced to make tough decisions. This session, the return of redevelopment will be championed as a means to fix a state housing crisis that’s the result of too many land-use regulations and fees.

Prediction: Redevelopment ultimately will come back and will once again become a scourge to taxpayers and property owners. State lawmakers are unlikely to address absurdly high housing prices by rolling back excessive building rules, but instead will focus on subsidies and these types of gimmicks.

Tax, ban, regulate and subsidize. The Legislature always brings to mind one of my favorite Ronald Reagan quotations: “Government’s view of the economy could be summed up in a few short phrases: If it moves, tax it. If it keeps moving, regulate it. And if it stops moving, subsidize it.” Despite that budget surplus, it’s wise to expect more pushes for all of the above, especially tax increases. The first trial balloon, from the Public Utilities Commission, would have been to tax text messages. The commission halted the vote after the Federal Communications Commission rebuked the plan. But that’s just pennies.

Liberal activists already qualified a ballot initiative for 2020 that would remove Proposition 13’s tax limitations from commercial properties. Furthermore, the new governor has championed the single-payer health care idea, which has become a litmus test for progressive legislators. The Legislature last year considered a bill that would have consumed nearly the entire state budget. On the banning side, we’re already seeing plans for the statewide halt on sales of flavored tobacco (including most vaping products, even though such products help smokers quit), and expect more gun control.

Prediction: As Brown suggested, the state Republican Party is too weak to stop even the most “out there” proposals. Sadly, the chances of the California GOP getting its act together anytime soon is somewhere in the ballpark of zero. There’s no sense worrying, though. Just enjoy the holidays. There will be plenty of time to fret once the Legislature returns.

Steven Greenhut
Follow Their Stories:
View More
Steven Greenhut is a senior fellow and Western region director for the R Street Institute. Write to him at sgreenhut@rstreet.org. His political views are his own.
Most Popular
1
At Large
The Lingering Fog of War and Lessons From Vietnam
by Mark Moyar