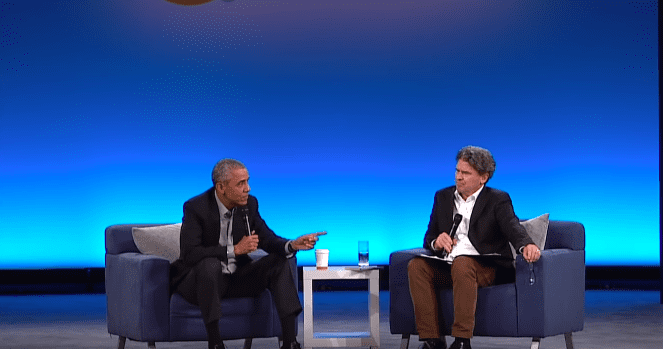 “Let’s have a hootenanny,” Dave Eggers says as he seats himself cross-legged on the floor of Kramerbooks & Afterwords.

The prolific author, journalist, and founder of McSweeney’s is ostensibly only here this Monday in Dupont Circle to sign copies of his new political satire, The Captain and the Glory (2019). But he also has a warning he’s desperate to share with his fans: Don’t think President Donald Trump is going to be easy to beat in 2020.

“I have to disabuse people of this all the time,” he says in reference to his liberal friends who think otherwise.

And Eggers has the facts to back his fears. Since 2016, he’s immersed himself deeply in the study of Trump and why otherwise level-headed Americans continue to support him. He has staked out all-day Trump rallies, interviewed hundreds of Trump supporters, and covered the subject extensively for the Guardian. And his prediction for 2020 remains the same as his conclusion in the summer before 2016: “This guy could win.” 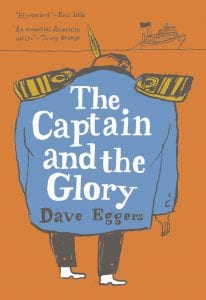 That’s a troubling thought to Eggers, who says Trump’s positions on immigration, his history of inflammatory comments, and his overall lack of political experience are bad for the country. The fact that so many otherwise generally “calm, sane” people are able to look past these stumbling blocks continues to nag at him. Eggers explains that after 2016, his political journalism alone was not enough to stop that nagging anxiety about life in the Trump era.

“I was covering it from a sane point of view, trying to capture the complexity of it all,” he says, adding that after a while he became frustrated when simply reporting on Trump didn’t capture “the absurdity of the moment.”

“My pieces were always reasonable, and the people were reasonable, and everybody was so calm and rational,” he says. “But when you back up a little bit and realize to truly reflect the moment, I think satire, allegory, parable — those are what felt right to me.”

The result of his “realization” is The Captain and the Glory, a satirical parable in the grim vein of Sinclair Lewis’ It Can’t Happen Here (1935). Its plot will be familiar to anyone who has followed American politics for the past three years. An old man with a yellow feather in his hair (guess who) convinces the passengers of a huge ship to make him captain. With the help of the very worst sort of people, he makes life miserable for everyone aboard the ship — including himself.

Eggers’ caricatures are easy to make out. The old man is Trump. The first mate who opposes his bid for the captaincy is Hillary Clinton. The admiral whom the old man often badmouths is John McCain. The daughter with whom the old man often flirts is Ivanka Trump. The daughter’s doll is Jared Kushner. And so on. Most of the characters are at least thinly disguised parodies of real people, but a few are just transpositions from C-SPAN hearings: minor players such as Michael the Cohen and Paul the Manafort.

The book’s humor swings on two hinges. The first is Eggers’ constant juxtaposition of the absurd and the horrifying. It’s the book’s most consistent narrative trick. On one page, the old man is frustrated by the abundance of “women-not-wearing-bathing-suits” in his vicinity. A few pages later, he’s drowning people “whose skin color tended toward brown.” In another passage, he eats cheeseburgers with pirates as they throw his henchmen overboard. Elsewhere, he makes “swarthy” workers cover his windows with bulletproof glass — and then has them thrown overboard. A lot of people get thrown overboard in the course of 114 pages.

This repetitive structure would quickly fall apart without the second (and sturdier) hinge: the book’s newsiness. Every single character and event in the novella lines up to a news item from the summer of 2015 through early 2019, with the release of the Mueller report. We get absurdist regurgitations of Steve Bannon, Robert Mueller, and Vladimir Putin. Bannon becomes a voice in a vent, Mueller a silent cowboy, and Putin a shirtless man known as The Pale One.

This is essentially effete fan fiction. Although Eggers says he wants to present a “more aerial, timeless take on what’s happening,” he binds himself strictly to facts gleaned from Politico, the New York Times, and the Washington Post. But what was the point, when reality was weird enough without any added flourishes?

When I ask Eggers if he worries that his satire is too deeply mired in news cycles past, he admits that’s a possibility. But he’s not too worried because the story of Trump will remain relevant long after the bad orange man is gone. After all, Americans will always be in “danger of electing a charlatan” because “not everyone loves liberal democracy or knows exactly what it is.” While the specific jokes of The Captain will become obscure, its general gist might teach future readers about the dangers of authoritarianism.

Eggers isn’t the only one who thinks so. In his blurb, the baseball writer George Will commends Eggers for spicing up the news with his jokes: “If the normal daily diet of news makes you think that Lord Byron was right — that you should laugh so you do not weep — then let Dave Eggers help you do just that.”

Well and good. But for most readers, Will’s recommendation does not portend a very funny book. That usually means, well … something else.

And it’s that Something Else that plagues Eggers and his circle — the much-maligned Lit Bros — whenever they touch anything political. Earnest authors such as Eggers, Jonathan Franzen, and Nicholson Baker, so nimble when reporting the daily circumstances of postmodern American life, often seem to get flat-footed when talking politics. Eggers, with his self-consciously earnest style, is a repeat offender, with memorable groaners in McSweeney’s and a superfluous diatribe against the Iraq War in the first line of his celebrated introduction to David Foster Wallace’s Infinite Jest (1996).

The rest of the Lit Bros have also laid their biggest eggs when tackling politics. Baker, whose whose lurid phone-sex dialogue Vox (1992) caused a stir when it was reported Monica Lewinsky gifted it to President Bill Clinton, wrote a strange little novel in 2004 called Checkpoint. Like Vox, it’s an absurdist dialogue. But, buzzkill of buzzkills, what could have been an amusing diversion quickly devolves into a series of detailed descriptions of how to kill W.

Perhaps the worst offender among the Lit Bros is Franzen, whose novel Freedom (2010) nearly wrecks itself on a hackneyed skewering of neoconservatives and their warmongering ways. Although usually a detailed observer of the anxieties that drive his characters, Franzen can’t detach himself from his own politics when writing about ideas with which he disagrees. He becomes so concerned with teaching his readers good and bad that his characters become little more than organs through which arguments flow.

Maybe that’s why satire isn’t a favored form among the Lit Bros. It takes a detached, jaded mind — Christopher Buckley or P. J. O’Rourke on his good days — to pull it off. There’s no room for nice guys. Lovers of “calm, sane” conversations will be frustrated. The earnest will be quashed.

Yet Eggers persists. As he wraps up this evening’s hootenanny, he admits that his rewrite of the Trump presidency, if not a successful satire, has at least been therapeutic.

“I think it still has a place,” he says. “You can see things a little bit differently, sometimes you get clarity. And at the very least, you get the comfort of being able to laugh about something that hurts so badly.”

Comfort for the author, maybe. Cringe for the reader.