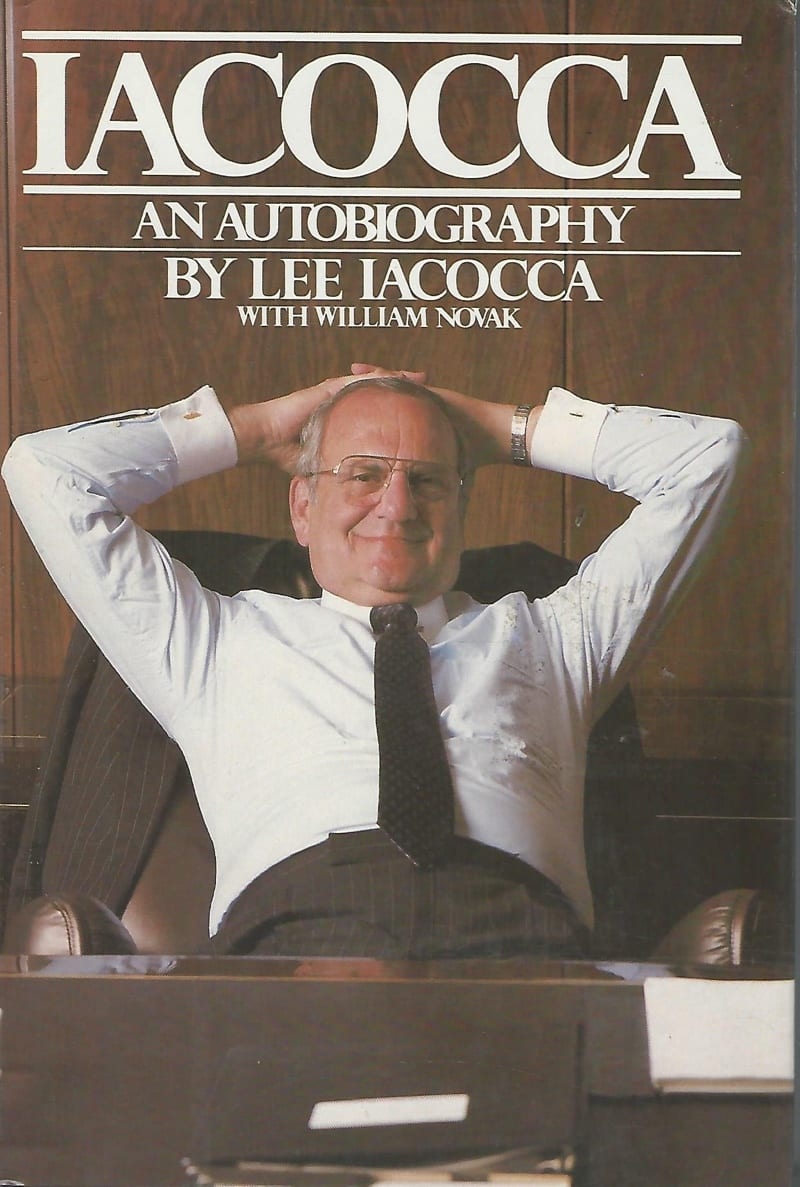 Reviewed by P.J. O’Rourke, The American Spectator, May 1985

You see the poor bastards at every airport in the country and all the Ramada Inns, Avis counters, and Beef-and-Blank restaurants. They have shoes with metal dingles, vinyl briefcases, Seiko watches. They’re dressed in poly-blend vested suits and don’t know not to wear a belt with the vest. Horrible Yves Saint Laurent buckles peek out the bottoms of the waistcoats. They are America’s young management meatballs. And every man jack of them has a copy of Iacocca: An Autobiography under his arm. It is the New York Times’ number one nonfiction bestseller. It has overtaken In Search of Excellence as the nation’s most popular business book. Over 1.4 million copies have been printed, and each is being read by someone who painfully traces his way down the page with a finger and moves his lips.

The secret is in there. The meatball knows it. If he can just read carefully enough he’ll crack the code: “How I turned personal failure, corporate debt, the two-bit K-car, and a goofy last name into glory, fame, and worldwide respect.”

Lee Iacocca is a hero for our time — a conceited, big-mouth, glad-handing huckster who talked the government into loaning his company piles of money. And Iacocca: An Autobiography is literature for our time. That is, it stinks. My copy looks like some origami instruction manual, it is so dog-eared from marking idiocies.

First, there is the beastly style, coarse, disorganized, repetitious, and bulked with oatmeal filler:

During that time the factories were simply not operating, which meant that both the machinery and the workers were idle.

John Riccardo and his wife, Thelma, were two of the finest people I’ve ever met. Unfortunately, the crisis at Chrysler was so severe that I never really got to know them.

To say the least, testifying before congressional and Senate committees has never been my idea of fun and games.

But then came the Depression. No one who’s lived through it can ever forget.

This was probably the greatest jolt I’ve ever had in my business career. When I thought about it, I was bereft. (That’s a euphemism for feeling lower than whale shit!)

This much can be blamed on the amanuensis, William Novak, who should know better and ought to be held by his heels and shaken until his brains run out his ears and some more useful innard slides down and fills his skull.

The rest of the problems are Iacocca’s own. He is a paranoid egomaniac. But those are not the terms. They are too clinical and blame-evading. We need older, stricter words. The man is consumed by pride and besotted with vanity. Every nitpick in his life must be of compelling interest to us, his co-adulators:

When I was in sixth grade there was an election for captain of the student patrol. The patrolmen all wore white belts with a silver badge, but the lieutenant and the captain got to wear special uniforms with special badges. … I loved the idea of wearing that uniform, and I was determined to be the captain.

… a number of journalists have reported (or repeated) that my parents went to Lido Beach in Venice for their honeymoon and that I was named Lido to commemorate that happy week. It’s a wonderful story, except for one problem: it’s not true.

There is persistent name-dropping done mostly with a degree of deftness thus:

Once, at a private dinner with Vince Lombardi, the legendary football coach and a friend of mine …

And every now and then we are treated to a passage of the following kind:

Once [Henry Ford] and his wife, Cristina, came to our house for dinner. My parents were there, too, and Henry spent half the night telling them how great I was and that without me there wouldn’t be a Ford Motor Company. On another occasion, he took me to meet his good friend L.B.J.

Of course, self-love cannot be displayed in full bloom without a leafy green background of hatred for others. Chapter ten begins with the sentence, “In 1975, Henry Ford started his month-by-month premeditated plan to destroy me.”

Darn that old Henry Ford, anyhow. And he’d just got done telling Lee’s mom and dad what a swell kid they’d raised, too. Well, Lee is not going to take this lying down, not when he’s got a whole book of his own to say things in. Iacocca launches a rhetorical assault the likes of which has not been heard since Cicero accused Marc Antony of screwing the pooch. Rapier thrust follows rapier thrust: Lee wanted a signed photograph of Henry Ford, but Henry never got around to signing it. Henry sold the company plane to the Shah of Iran for five million dollars and “The company lost a bundle on the deal.” Henry used tax shelters. Henry told his executives to “ … get off your asses and do what needs to be done for the black community,” then later that day used the word “coon.” And Henry Ford and women?

Actually I always thought he hated women — except for his mother. When Henry’s father died, Eleanor Clay Ford had taken over the family and put her son Henry in charge. She also kept him somewhat in line.

But when she died in 1976, his whole world came tumbling down.

One sick bunny, that Henry Ford. What’s more, he likes to have a few shooters and get wide:

Henry tried to be sophisticated and European. … But it was all a façade. After the third bottle of wine, all bets were off.

(With Iacocca in the next office, his head as large as a haystack and barbering from nine to five about what a big lasagna he is, who wouldn’t need a drink?)

Anything can be excused by genius, and Iacocca has been called one. But where’s this genius parked?

Iacocca’s book is filled with managerial balloon juice. “The only way you can motivate people is to communicate with them.” “ … the speed of the boss is the speed of the team.” “In addition to being decision-makers, managers also have to be motivators.” “To sum up: nothing stands still in this world.’’

He exhibits general ignorance of business principles. “A couple of months after I arrived [at Chrysler] something hit me like a ton of bricks. We were running out of cash!” He berates the Federal Reserve Board for being primarily concerned with banking. He blasts America as “a nation enamored with investing in paper” as though the cash represented by stocks, bonds, and certificates of deposit were all jammed in a sock under Carl Ichan’s mattress. He discusses the overseas retail prices of Japanese cars without reference to Value Added Tax, indicts the Japanese for exporting unemployment to the United States (How do they pack it? Does it spoil?), and he claims this for the United Auto Workers’ reaction to his ballyhooed 1980 salary of $1 a year:

From that day on I was their pal. The union loved me. … They said: “This guy is going to lead us to the promised land.”

Moreover, Iacocca exhibits specific ignorance of the automobile business. He says, “Now, it’s true that you can’t make money on small cars — at least not in this country.” But Honda does, at its Marysville, Ohio plant. And General Motors is investing 1.5 billion dollars in a new domestic small car division, presumably not for kicks. Iacocca calls the Mustang II “a terrific design.” It sucked. He says, “The K-car is a sensational product.” It is adequate. He claims the Chevrolet Vega had a “pancake aluminum engine.” It had nothing of the kind. And he proudly takes credit for the stupid seatbelt interlock ignition system that appeared on 1973 cars and disappeared as quickly as owners could unhook it.

The (Mercury] Marquis had achieved … the softest, plushest ride in the world.

His idea of design:

My plan was to create a new car using the same platform, engine, and even the roof, but to make enough changes so that the car really looked new and not like a spinoff of the T-bird.

And the following explains better than John Stuart Mill himself could what it is Lee Iacocca does for a living:

… on the island of St. Thomas, we unveiled the new Cougar. At a beach lit by clusters of brilliant torches, a World War II landing craft pulled up to the shore and lowered its ramp. The audience was breathless as a shining white Cougar drove onto the sand. The door opened, and out stepped singer Vic Damone, who began to entertain.

But let’s be fair. The man works hard. He took a risky job at a troubled company and managed to put it in the black. He … Oh, let’s not be fair. This book is rubbish. The meatballs in the airports would be better off reading the phone book. Check under Brooks Brothers. A banker-grey two-piece chalk stripe with a button-down shirt and a pindot tie and at least you’ll “really look” like you’ve got some sense.

As for Lee Iacocca, he’s being bruited about as a 1988 Democratic Presidential candidate. The man deserves no better.

P.J. O’Rourke, a political satirist and journalist, is a longtime contributor to The American Spectator.