It’s an amazingly consistent process: Frank Rich conjures up his thesis, scouts around for confirming evidence, and finds it every time! 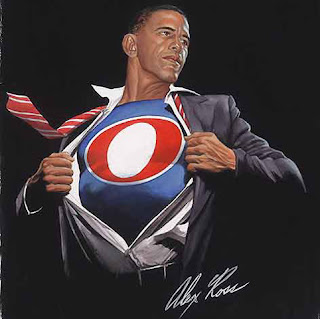 Not since Clark Kent changed in a phone booth has there been an instant image makeover to match Barack Obama’s in the aftermath of his health care victory. “He went from Jimmy Carter to F.D.R. in just a fortnight,” said one of the “Game Change” authors, Mark Halperin, on MSNBC. “Look at the steam in the man’s stride!” exclaimed Chris Matthews. “Is it just me, or does Barack Obama seem different since health care passed?” wrote Peter Beinart in The Daily Beast, which, like The Financial Times, ran an illustration portraying the gangly president as a newly bulked-up Superman.

Despite applause from Rich and his fellow liberals, however, the president’s Real Clear Politics job-approval average is currently a net 1.9 (47.8% approve, 45.9% disapprove), dramatically down from a net 28.9 (60.7% approve, 31.8% disapprove) a year ago. Every recent poll shows opponents of ObamaCare outnumbering supporters — 53% to 32% according to a CBS survey taken after the bill’s passage —  and yet, in the world where Frank Rich seeks evidence of Obama’s success and popularity, everything is coming up roses.

Having staked out this counter-factual premise, Rich then devotes himself to the unoriginal theme of Obama as a Rorshach inkblot test, asserting that people “see only the Obama they want to see” — echoing my own observation in the immediate aftermath of the 2008 election:

Perhaps the most brilliant thing about Barack Obama’s successful campaign was its vagueness. In offering himself as the all-purpose Change We Can Believe In, Obama gave believers a blank slate and a tacit license to project upon him their deepest longings.

The problem with that kind of belief is that the inevitable failure to fulfill such infinite longings results in disillusionment. (Has Obama started putting gas in Peggy Joseph’s car yet?) And that disillusionment is most certain when it comes to the most startling of Rich’s assumptions:

The speed with which Obama navigates out of the recession, as measured by new jobs and serious financial reform, remains by far the most determinative factor in how he, his party and, most of all, the country will fare in the fractious year of 2010.

Here Rich assumes that Obama will “navigate out of the recession” and that the only question is the speed with which he accomplishes the task. Yet unemployment remains at 9.7% and federal officials predict the rate will stay at similar levels through 2011.

Having expended some $800 billion on deficit “stimulus” spending, Obama finds himself facing the ugly economic reality of a market prepared to downgrade the AAA rating of U.S. bonds unless the federal government engages in serious belt-tightening.

Yet another wave of financial crisis, driven by trillions of dollars of bad commercial real estate loans, looms on the economic horizon. In 2009, there were 140 U.S. bank failures; there have already been 38 bank failures in the first three months of 2010, a pace likely to accelerate as the year continues. And the traditional liberal response to this kind of problem (i.e., more deficit spending) can only be undertaken at risk of sparking a bond-market crunch along the lines of the Greek debt crisis, except on a gargantuan scale.

Rather than navigating out of the recession, Obama and the Democrats have charted a course into much more serious economic trouble. As this unpleasant reality hits home in the months ahead, Frank Rich and his liberal friends will discover yet another way in which Obama is like Superman: His super-powers are strictly fictional.

Robert Stacy McCain
Follow Their Stories:
View More
Robert Stacy McCain is the author of Sex Trouble: Essays on Radical Feminism and the War Against Human Nature. He blogs at TheOtherMcCain.com.
Most Popular
1
Flynn Files
Unprecedented FBI Raid; Trump Calls It ‘Weaponization of the Justice System’
by Daniel J. Flynn