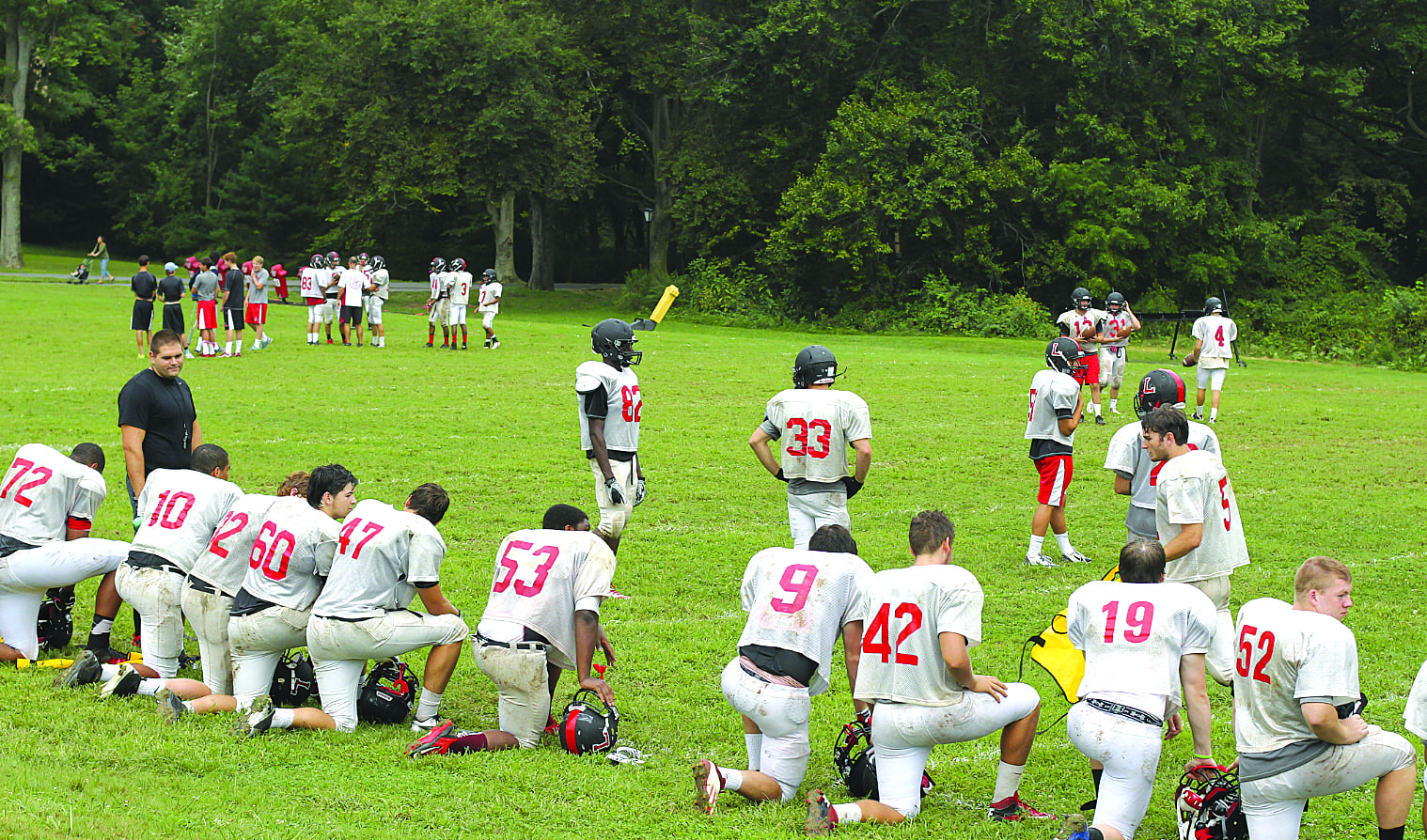 AN ITEM HEADLINED “Wimping of America” in the Daily Caller a few weeks ago informed us that the intramural football program at the Lawrenceville School in New Jersey, allegedly the oldest in the nation, had been deemed by its (female) headmaster to be too dangerous to the participants and would henceforth be replaced by flag football. Like the article’s (female) author, I felt a pang of regret at the news, even though I am myself without any happy memories of playing intramural football—or doing anything else—at Lawrenceville. Like her, too, I am more than a little inclined to regard the move as further evidence (if any further evidence were needed) of the enforced wimpification of America’s youth. You cannot separate the thrill of football from the risk any more than you can that of boxing. These thrills were once considered to be among the legitimate pleasures of (male) youth. But then, as you might have guessed, they don’t do boxing at Lawrenceville either.

Change and decay in all around I see. Yet what struck me even more forcibly than the news from Lawrenceville was the fact that the article’s author, presumably some kind of conservative, had apparently never heard of the works of Owen Johnson, whose great stories set at Lawrenceville in the early years of the last century, were much concerned with intramural (and inter-scholastic) football and surely deserved at least a mention in any story concerning that sport and that school. Johnson not only gave anyone who can read the chance to become in imagination an alumnus of Lawrenceville, but he also helps—crucially, I think—to define a whole period of American history and its now-vanished and decidedly un-wimpy ethos as no other author does. If ours were even a minimally functional culture, anyone with any pretension to educational accomplishment would know his Lawrenceville stories—or at least know about them—just as they would know that the first sentence of this paragraph is a quotation from the great Victorian hymn, “Abide With Me.”

Even a generation or two ago, most educated Americans would have known the story of how that hymn was supposedly played by the ship’s orchestra on the Titanic as it sank in the icy North Atlantic—that and the fact that there were many instances of heroism and chivalry on the same occasion. By the time James Cameron came to make his pre-teen movie version of Titanic in 1997 (he went with the “Nearer, My God, to Thee” version), all the heroism and chivalry had dropped out of the story, presumably on the grounds that it was both out of date and politically incorrect. But wouldn’t his audience at least want to be aware of the quaint, apparently suicidal customs of certain gentlemen in 1912 who gave up their places in the lifeboats to the women and children? Not in Mr. Cameron’s view. Perhaps he thought them as dangerous for tender youth as tackle football, that other outdated test of manhood.

Progressive culture, which I regard as a contradiction in terms, is now full of such silent corrections of the past. In the much-praised Joss Whedon film version of Much Ado About Nothing that came out last summer, Shakespeare’s play was turned into something innocuous—to the point that it would have been incomprehensible to its author—by undergoing a similar sort of historectomy. Up until quite recent times, the female version of the male honor that was once the glory of the Titanic legend was chastity—which, of course, no modern audience could be expected to “relate to.” So the story of Hero and Claudius, like that of Beatrice and Benedick, had to be shorn of the transcendent dimension of old-fashioned romance and made instead into a comedy of manners about “relationships,” of which nobody up until about 40 years ago had ever heard. In the same way, Measure for Measure in this fall’s version by the Shakespeare Theatre Company of Washington is no longer about justice, as the title tells us it was to Shakespeare, but the much more congenial subject to modern audiences of hypocrisy. And so another piece of historical awareness is allowed to slip out of the consciousness of our contemporaries, unlamented by our cultural guardians.

I hope you will forgive the descent into politics if I ask: In whose interest is this systematic cutting off of culture from history? Some years ago I wrote in these pages about the “Two Cultures” controversy in Britain 50 years ago, and I find that it is once again in the news with the publication of an annotated edition by Stefan Collini of F.R. Leavis’s Richmond Lecture of 1962, in which he savagely attacked C.P. Snow’s ponderous Rede Lecture of three years earlier—also edited by Professor Collini in an edition that came out last year. The “Two Cultures,” you may remember, were Science and the Humanities, which, Snow lamented all those years ago, had drifted ever further apart. Leavis’s attack boiled down to the fact that there were not two cultures but only one, and that in its terms Snow, a successful if mediocre novelist as well as a scientist, was a simpleton and an ignoramus.

Leavis clearly had the better of the argument, but it has remained a live issue over the intervening half-century partly because the “progressive” tendency continues to find science—or rather the intellectual and cultural prestige of “science”—a useful tool for cutting us off from our history. Having disposed for the most part of the living kind of history, which we call tradition, progressives now think it expedient to expunge any record of the fact that people once thought differently from the way they think now.

HISTORY, HITHERTO THE soul of culture, tends to be to the progressive what it so often is to the scientist: not just useless but a positive hindrance to understanding, a history only of error. That’s what makes the progressives’ alliance with a supposed science-based culture so fruitful for their purposes, and why this summer, as audiences flocked to the new Much Ado, a new, American version of the old Snow-Leavis faceoff took place in the pages of the New Republic between Steven Pinker and Leon Wieseltier. Once again, too, it was no contest. Professor Pinker’s essay, “Science Is Not Your Enemy: An impassioned plea to neglected novelists, embattled professors, and tenure-less historians,” attempts to re-define “scientism” as a good thing, and, although the result may be impassioned, it is so badly written and reasoned as to be almost self-refuting.

The professor follows in Snow’s footsteps by making an erroneous empirical observation in supposing that knowledge as cultivated by the humanities is the same kind of thing as knowledge compiled by science. As the latter is progressive, proceeding by trial and discard of factually unsupported hypotheses, so he thinks must the former must be too. He doesn’t argue for this contention; he merely assumes it. Everything we know, to him, is known as science knows things: conditionally and subject to confirmation by additional data. But knowledge of literature or history is rarely of this kind. Scholars of the humanities seek not for the latest information or hypotheses, but for the truths that have endured through centuries and millennia.As Ezra Pound wrote, “literature is news that stays news.”

Mr. Wieseltier’s critique, rather hyperbolically titled “Crimes Against Humanities,” notices this elision of the two kinds of knowledge but misses an even more shocking example of scientific arrogance. This is where Pinker asserts that “the application of science to politics not only enriches our stock of ideas, but also offers the means to ascertain which of them are likely to be correct.” It is telling that he is apparently quite deaf to the irony in his use of the word “correct” as applied to political ideas. Isn’t that just what the critics of “scientism,” whom he is supposedly answering here, not to mention believers in democracy, are afraid of? He seems to be imagining something like the simple certainties of the global-warmists extended to all political debate. If science can tell you not only facts about the physical world but also what to think and do about them, any different view from the allegedly scientific one is automatically as illegitimate as belief in “fate, providence, karma, spells, curses, augury, divine retribution, or answered prayers” — all of which Professor Pinker treats, absurdly, as discredited scientific hypotheses. When the mask slips like this, we may catch a glimpse of the real purposes of those who seek to cut us off from our rich cultural patrimony, leaving us with nothing but a threadbare anti-culture of the earthbound, the material, the demonstrable, and the morally apodictic. And yet hardly anyone seems to mind very much about it.