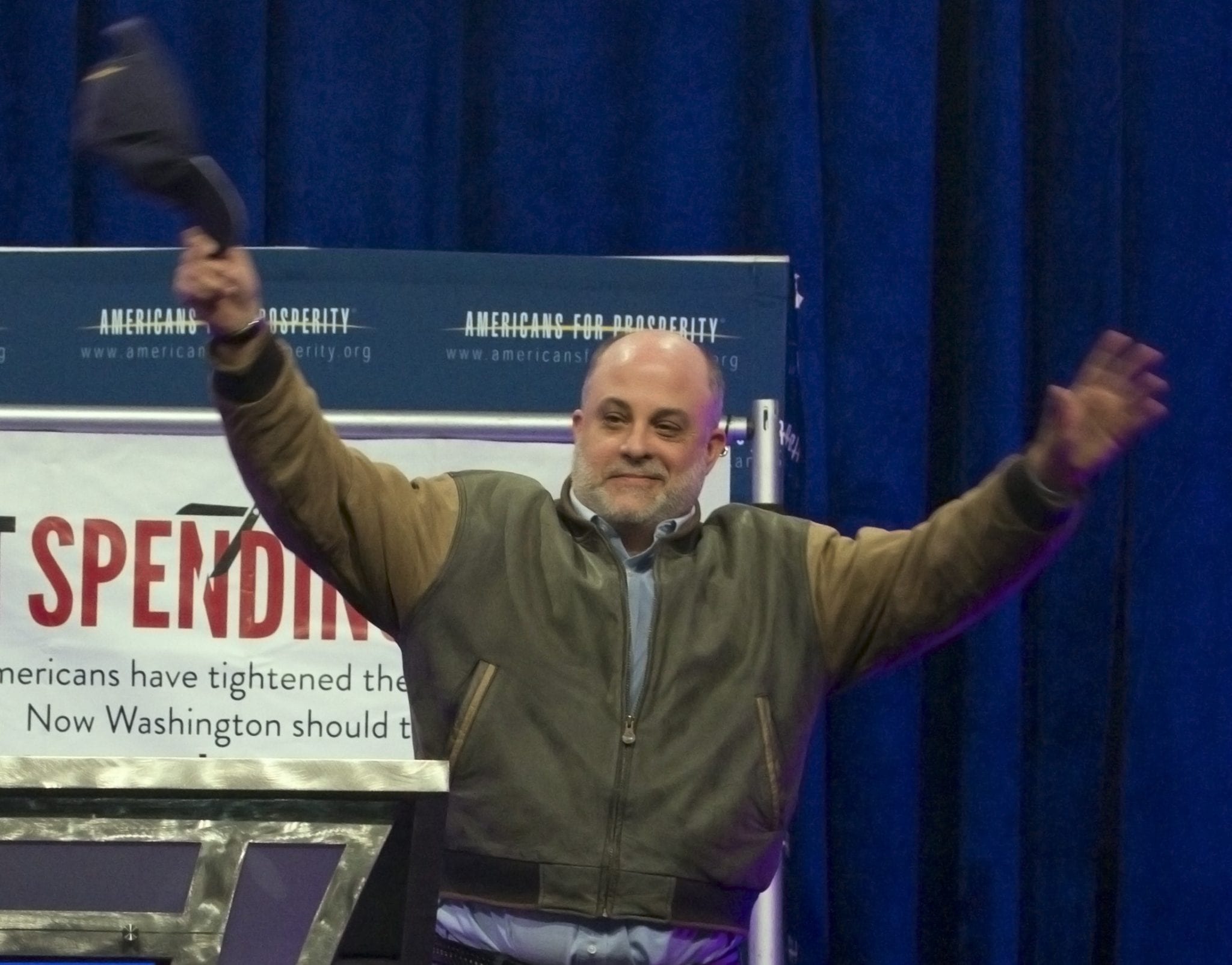 POLITICS ‘HAVE REACHED civil war levels’…” was the headline on the Drudge Report the other day. It linked to a story in National Journal quoting Sen. Tom Harkin as saying, “We are at one of the most dangerous points in our history.” It quoted Sen. Ted Cruz likening the Republican moderates to the appeasers at Munich. Another article quoted an aide to President Obama as comparing Republicans to “terrorists, kidnappers, arsonists…” Yet another quoted the Senate’s chaplain as saying “Lord, deliver us from governing by crisis.”

If that’s what the Lord is going to do, I say, let Him read Mark Levin’s new book, The Liberty Amendments. It is a brilliant compendium of changes Levin proposes for improving the Constitution. They range from amendments establishing term limits for members of Congress and the Supreme Court, to amendments prohibiting the federal government from spending more in a year than it receives in tax revenue. It includes an amendment to restore to state legislatures the authority to choose senators—and to bestow the additional authority to recall wayward solons.

Canny though they are—one doesn’t have to agree with each of them to see their canniness—the part of the book that I like best is his case for a convention of the states. This is a never-before-used procedure for enacting constitutional amendments. Such a convention could be considered a constitutional expression of no confidence in the Congress. The procedure was placed in the Constitution by the Founders precisely as a hedge against a runaway, tyrannical, or—as in the current instance—deadlocked Congress. It is telling that in such a circumstance it is to the states that the Founders would have us turn.

Levin gets this down to the ground, though he is only the most recent advocate of a convention of the states. In March 2010, James LeMunyon, a Republican member of Virginia’s House of Delegates, called for the same in the pages of the Wall Street Journal. He argued that Congress “is in a state of serious disrepair and cannot fix itself.” Later that year, in the pages of this magazine, journalist Philip Klein proposed a convention—“a not-so-secret weapon for opponents of ObamaCare and other federal outrages.”

Sen. Tom Coburn of Oklahoma echoed the sentiment a few weeks ago at a town hall meeting, suggesting his fellow Sooners join the movement for what the Tulsa World termed “a national constitutional convention to cut down an oversized federal government.” The senator addressed the worry that a convention could go in an unanticipated direction: “I used to have a great fear of constitutional conventions,” he said. “I have a great fear now of not having one.” The loudest applause, according to the World, erupted when he announced he’d read Mark Levin’s book.

Levin sagely eschews the phrase “constitutional convention” to describe what Article V authorizes. What it actually says is that Congress, “on the Application of the Legislatures of two-thirds of the several States, shall call a Convention for proposing Amendments, which, in either Case, shall be valid to all Intents and Purposes, as Part of this Constitution, when ratified by the Legislatures of three fourths of the several States, or by Conventions in three fourths thereof.”

It is plainly the states that are in the driver’s seat when they get their backs up. Once two-thirds of them apply to Congress on the point, Congress “shall” call the convention for proposing amendments. Levin characterizes this as “significant authority” for the state legislatures “to rebalance the constitutional structure for the purpose of restoring our founding principles.”

The idea, Levin notes, was proposed in Philadelphia as part of the “Virginia Plan” introduced by that state’s governor, Edmund Randolph. One of the key points of the plan was that it ought to be possible to amend the Constitution without the concurrence of Congress. There was some back-and-forth on this; it was Roger Sherman of Connecticut—a remarkable Founder, the only man to sign all four of America’s so-called great state papers—who proposed an alternative in which Congress would propose amendments and the states would ratify.

James Madison suggested dropping the state convention altogether. It took George Mason to scotch that idea. He, in his wisdom, feared the prospect that Congress could turn oppressive: “It would,” as he put it, “be improper to require the consent of the Natl Legislature, because they may abuse their power, and refuse their consent on that very account.” It’s almost eerie to retreat to one’s study at this juncture, sit down with a copy of Madison’s convention notes, and observe how far-sighted Mason was.

The Congress “shall call a convention.” Nothing in this particular is left to the discretion of that body. And of consequence, all the declamation about the disinclination to a change vanishes in air. Nor however difficult it may be supposed to unite two-thirds or three fourths of the State legislatures, in amendments which may affect local interests, can there be any room to apprehend any such difficulty in a union on points which are merely relative to the general liberty or security of the people. We may safely rely on the disposition of the State legislatures to erect barriers against the encroachments of national authority.

Unless, of course, the convention called by the states gets out of hand. There are those—Sanford Levinson of the University of Texas is one of them—who fear the states more than Congress. Levinson, the man responsible for the law school’s mounting in its corridors of a wonderful collection of paintings of the American flag, has become an opponent of the Constitution as the Founders wrote it. I had a cable from him the other day saying that he and a colleague are currently teaching a course at Harvard Law School precisely about the idea of a convention for proposing amendments.

He writes that petitions from two-thirds of the states would clearly trigger a convention, but then uncertainty reigns: “Whether it would then trigger a ‘convention of the states’ or ‘a convention of the people’ is a very important theoretical question.” Indeed it is. If such a convention were organized—like the original convention at Philadelphia—such that each state had one vote, a certain set of amendments might emerge. If votes were allotted to the states according to their population, or even directly to the people, one can imagine a very different set of amendments.

Either way, Mark Levin isn’t worried. The barrier to abuse is that no matter how amendments are proposed, they must be ratified by three-quarters of the states in order to take effect. Levin calls that a “serious check.” But is it serious enough? Levinson and another famed law professor, Akhil Amar of Yale, are nursing the idea that ratification by the states is itself not sacrosanct and could be replaced by what Levinson has characterized as “a national referendum that would bypass the state legislatures and the requirement of approval by three-quarters of the states.”

Impossible? Careful here. The Philadelphia convention, Levinson has noted in his book Framed, decided to “to disregard the stringency” of the 13th of the Articles of Confederation, which prohibited any change to the articles unless “confirmed by the legislatures of every State.” The Founders, moreover, met in secrecy so tight that Washington upbraided them for leaving a scrap of paper on the floor of what has become known as Independence Hall. In this day and age, Levinson has suggested, a convention could be broadcast on C-Span.

Mark Levin, who has his own standing, writes that he is without illusions “about the political difficulty” in rallying support for a convention of the states. One famous senator, Everett Dirksen of Illinois, tried it in the 1960s and, despite his magnificent rhetorical abilities, fell short. But even with all the tumult in Dirksen’s time, our own, one could argue, is more parlous still—and more deadlocked. We halt the government over the budget, we can’t extricate ourselves from the rafters of the debt ceiling, and we are being mocked by a runaway Federal Reserve System. It’s hard to imagine but that George Washington and Edmund Randolph, George Mason, James Madison, Roger Sherman, Gouverneur Morris, Elbridge Gerry, Alexander Hamilton, and the boys would have turned to the states long ago.