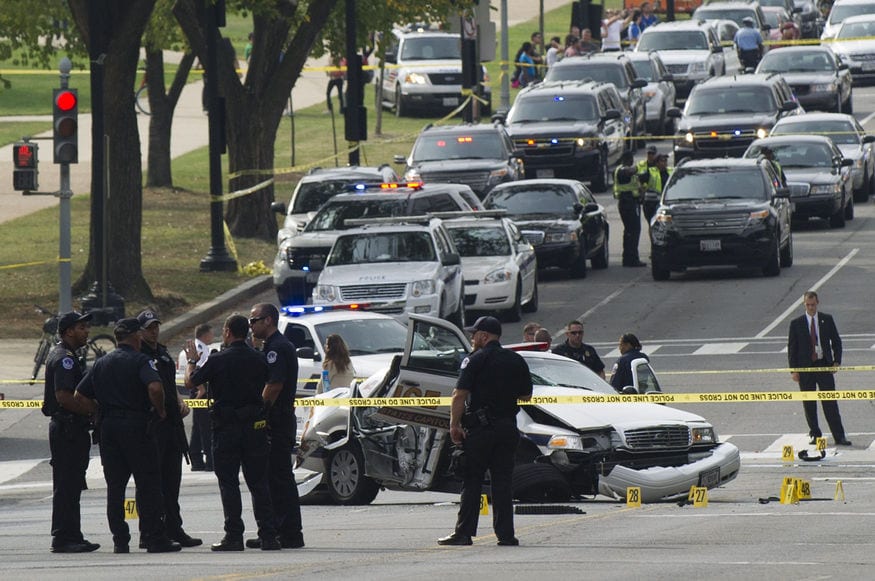 WASHINGTON — I am just wondering whether Miriam Carey, the mentally ill mother who drove her black Infiniti down Pennsylvania Avenue after she rammed a White House barricade, was read her Miranda rights before she was shot dead in a fusillade of gunfire by a gang of well-armed police who surrounded her car at the other end of Pennsylvania Avenue. The information has not been released, though as I write almost a week has passed since the lethal event. Why could not those crack shots have aimed at her car’s tires? Then they could have waited for her next move. It looks to me like they were shooting at the side of the car about halfway up the door. They apparently wanted to take no chances.

I guess they worried that she had some powerful explosives in the car. Yet what could Miss Carey have had that was so dangerous to them? She was still a couple of blocks from the Capitol. Did they fear dynamite? Could she have had a nuclear devise? Neither was very likely. We now know that she had only her year-old child. The child was not hurt.

Thus far there has been an astonishing silence surrounding the death Miss Carey. None of the usual complainants against police violence have been heard from—not the Rev. Jesse Jackson nor the Rev. Al Sharpton. Not even the NAACP or the ACLU. Nor for that matter have the hordes of defenders of Trayvon Martin been heard from. The only voices of protest have come from the Washington Times editorial board and from two writers at The American Spectator—now there are three. This strikes me as exceedingly strange. Legal sleuths tell me that the police could be subject to charges of negligent homicide or manslaughter. Are we going to forego a scrupulous investigation because of the possibility of these charges? How long will the conspiracy of silence last? Is the entire country going to participate in it?

When it reconvened last Thursday Congress gave the participating officers a standing ovation! That is amazing. What other elected body of lawmakers would applaud the shooting of an unarmed mother. Would the British Parliament do the same? I doubt it. For that matter, I doubt that any state legislature would allow itself to be whooped up into such a frenzy.

Miss Carey was an African-American. She had been to college and graduated with a BA in health and nutrition science. She had wanted to better herself from the rough neighborhood in which she grew up, and it seems she had. But she had a child out of wedlock and suffered postpartum depression with psychosis. She was under a doctor’s care. Health authorities say she was not a danger to anyone. She surely was driving recklessly last Thursday, but those armed officers could have incapacitated her without killing her.

Why is there no outpouring of concern from civil libertarians? Some observers say that it is because “the ruling class” feared itself threatened. Democrats and Republicans in the most powerful nation on earth were threatened. The President of the United States was threatened. So the death of Miriam Carey will be given short shrift.

Frankly I find this explanation preposterous. We are a nation of laws. We extend the rule of law even to the criminal class. It should also be extended to the mentally ill Miss Carey. It is not too late to extend it to her. Perhaps this is one instance in which the Rev. Jackson and the Rev. Sharpton can join with conservatives and demand an investigation. How many more defenseless citizens are going to be killed before the civilized among us demand action?