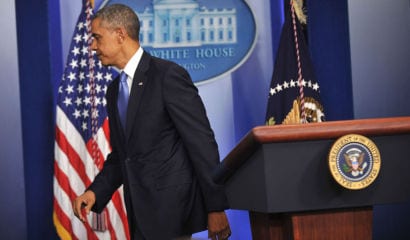 WASHINGTON — It is the most thunderous proof of the Taranto Principle to date. I am speaking of the Senate’s rejection of the House of Representative’s proposal to delay the individual mandate of the Affordable Care Act for a year, along with the federal subsidy for Congressional lawmakers and their staffs if and when these selfless public servants enter healthcare exchanges. You cannot have such subsidies and neither can I, but Congress and its aides can. The Senate will not even negotiate over it.

The insightful James Taranto of the Wall Street Journal coined the Taranto Principle when he noticed that the Democrats and the left in general are encouraged to act  absurdly by the fawning mainstream media. It is the media that have encouraged Democrats to demand of Republicans negotiations while the Democrats refuse to negotiate. Thus the Republicans are expected to accept the individual mandate of the Affordable Care Act while being left with nothing to negotiate. When asked by Steve Inskeep of NPR what he was offering to negotiate, our nugacious President said: “Steve, when you say what can I offer, I shouldn’t have to offer anything.” Senate Majority Leader Harry Reid’s contribution to negotiations was, “We are not going to mess around with ObamaCare, no matter what they do.” Case closed.

Harry Reid has gone further. He has called the Republicans “insane” for seeking negotiations when Reid has already refused to grant them that. “They should get a life,” Reid said, appropriating a line more suitable for the schoolyard than for the United States Senate. “It is the law [Obamacare], declared constitutional. The exchanges are coming on line tomorrow.” Actually, a lot has changed since Obamacare was passed in 2010 and since certain aspects of the law were declared constitutional. The House of Representatives, the most representative branch of government, has gone over to the Republicans. The majority of state legislatures have become Republican. Most governorships have become Republican. The law is increasingly loathed and feared by the American people.

Only a couple of days ago many Obamacare health insurance exchanges opened to glitches and chaos. Other aspects of the law have problems, and the President has postponed certain of them for a year. For powerful special interests he offers subsidies and exceptions for a year. Why not offer a similar delay in the whole law for the average American? It sounds reasonable to me.

The answer resides with the Taranto Principle. The President and his allies on the Hill do not read the conservative press. They do not encounter any counsel that does not agree with them. They do not associate with conservatives or independents. They know only people who think like them. The rest of us do not exist.

When confronted with the House of Representatives’ alternative to prevent congressional lawmakers and staff from receiving subsidies for entering healthcare exchanges, Reid had a tear-jerking answer. He said: “This time the House has attached a poison pill that would punish 16,000 Congressional staff.” Punish them? It is only treating them as the average American is being treated. Only the self-absorbed Senate Majority Leader would speak of the elite on Capitol Hill as though they were all Little Orphan Annie.

I for one do not know where all of this is leading the country, but my guess is that nothing will be achieved until President Obama and Leader Reid begin to negotiate, and that means giving something up.