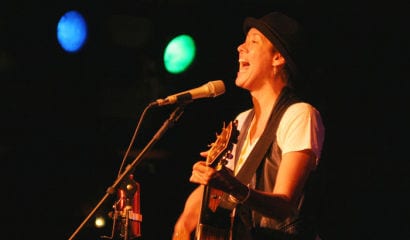 Once upon a time a rock star craving attention would simply bite the head off a live bat. Generating that kind of buzz today can only come by announcing one’s opposition to gay marriage.

“You got to appreciate how scared folks on that side of the equation are,” Shocked informed her San Francisco audience Sunday night. “Once Prop. 8 gets instated and once preachers are held at gunpoint and forced to marry the homosexuals,” she continued, “I’m pretty sure that that will be the signal for Jesus to come on back.” Shocked, and her shocked audience, laughed awkwardly at her apocalyptic rant. The folk-rock singer then joked, “If someone would be so gracious as to please tweet out ‘Michelle Shocked just said from stage: God hates faggots.’”

On cue, that’s precisely what the ignorant indignant did.

Twitterverse Savonarolas chimed in: “hoe you better commit suicide real quick.” The press compared her to the hateful Reverend Fred Phelps. She strikes me more as a prophet — albeit, like many seers, a slightly unhinged one — for anticipating that her audience would willfully misinterpret her words.

An activist in Vermont organized a Change.org petition demanding that club owners break agreements that they had entered into to host the apostate radical’s concerts. “Freedom of speech and artistic expression are critically important,” the petition reads,” “but this isn’t about free speech. This is hate speech.” As it stands, venues have canceled ten of eleven scheduled U.S. performances. The lone holdout, a club in Madison, Wisconsin, insists that they must wait on a decision from their boss when he returns from vacation.

Until Sunday night, everybody pegged “the anti-gay Ms. Shocked” as a lesbian superhero. Rachel Maddow certainly did when she stole Shocked’s haircut. The singer’s 1989 “On the Greener Side” video, a feminist reinterpretation of the iconic “Addicted to Love” video that replaced Robert Palmer’s female eye-candy with male models imitating their blank mannequin stares, brought a politicized edge to a relatively apolitical MTV in its 1980s heyday. So when police arrested Shocked two years ago at the Occupy Los Angeles protest, the news shocked nobody.

Despite the legitimate greatness of her 1988 near-hit “Anchorage,” Shocked’s left-wing political sensibilities far more than her artistic talents made her career. Her debut album, for example, featured a picture of her arrest at a protest outside 1984’s Democratic National Convention as cover art. So it makes sense that an audience built on ideological solidarity disappears because Shocked has finally done something to earn her name.

Popular music fans are a forgiving bunch. If they can place Chris Brown at the top of Billboard’s album charts after he beat up his girlfriend, put Steven Tyler on American Idol’s seat of judgment after he once secured custody rights to an underage girlfriend, or beatify Michael Jackson after his disturbing relationships with boys, then maybe a penitent Shocked will eventually win absolution, too. Alas, some transgressions, like embracing a political position that the voters of most states have endorsed, don’t merit clemency.

Before the San Francisco club pulled the plug on Shocked’s concert Sunday night, the singer characterized her beliefs as “nothing worth getting a froth over.” She apparently didn’t know her audience. “This is not a tribunal,” Shocked naively explained. “This is one woman’s opinion.”

Whoever said all publicity is good publicity should have never said it to Michelle Shocked. The nerve of some people to think that they can continue to make a living after embracing a ballot question endorsed (twice!) by a majority of California voters — in the state of California no less. Rock ’n’ roll, a musical form synonymous with rebellion, ends as conformity.

John Lennon observed that the Beatles bested Christ in the popularity department. Michelle Shocked opined that marriage should remain the domain of one man and one woman.

Heresies tell us so much about a society.