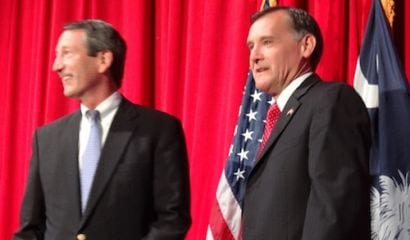 CHARLESTON, S.C. — Republicans here applauded Mark Sanford at the end of a sort of sermonette in which the former governor discussed the Argentine sex scandal that led to his being censured by the state legislature.

“I failed. I failed very publicly,” Sanford said during Thursday’s debate, referring to “the events of 2009” as he pleaded that “because you have had failure in your personal life” it does not mean “that you cannot step back into life again.”

Whether stepping back into life can also mean trying to step back into Congress, less than four years after an adulterous affair that made national headlines, is the question that faces voters in next Tuesday’s Republican runoff in South Carolina’s 1st District. Democrats have nominated the sister of cable TV comedian Stephen Colbert as their candidate, ensuring widespread attention to the May 7 special election to fill the seat vacated by Tim Scott’s appointment to the Senate. Will GOP voters here really choose Sanford as the face of the party in this high-profile race, perhaps even risking defeat in the Lowcountry district that has been safely Republican? This was the concern raised in Thursday’s debate by Sanford’s opponent, Curtis Bostic.

“A compromised candidate is not what we need,” said Bostic, the Marine Corps veteran and former Charleston County councilman who emerged from a 16-candidate GOP primary field to face Sanford in the runoff.

“Trust is a crucial issue,” Bostic said, adding that the possibility of Sanford winning the Republican nomination has made Democrats “excited about the possibility of taking this seat back.” Citing polls that show Sanford vulnerable against Democrat Elizabeth Colbert Busch, Bostic warned that if 1st District voters choose the scandal-stained Sanford, “We will lose this seat and lose it needlessly.”

Still, Sanford has formidable advantages in campaign cash and name recognition. He got 37 percent to Bostic’s 13 percent in the March 19 primary, and the brief two-week interval before the runoff doesn’t afford much time for the underdog to close the gap. And despite the 2009 scandal that wrecked Sanford’s marriage and ended talk of him as a potential presidential contender, the ex-governor still has many supporters — as evidenced by the applause for him in the debate at Porter-Gaud School — and he also still has indubitable political skills. Sanford displayed his jocular down-home charm repeatedly during the hour-long debate, and stressed the theme of fiscal conservatism throughout. In his closing remarks, he recited from memory a long quote by Barry Goldwater.

Most political observers here believe Sanford’s advantages will enable him to win Tuesday’s runoff, if narrowly. One local reporter covering the debate quietly explained that Bostic, whose second-place finish in the primary was widely attributed to his strength among evangelical voters, is a social conservative in a district where affluent Republican voters care mainly about economic issues. Yet the prospect of Sanford as the GOP candidate in this special election horrifies such conservatives as Ann Coulter, who Wednesday published an official endorsement of Bostic in which she wrote: “Any idiot who votes for Sanford in the runoff is working for the Obama administration.”

Coulter’s endorsement came the same day that former Pennsylvania Sen. Rick Santorum campaigned for Bostic in the district, praising the 49-year-old father of five as “someone you can be proud of, someone you can trust.” Santorum’s backing for Bostic could help motivate the pro-life voters who were the core constituency of Santorum’s 2012 presidential primary campaign, which may make a crucial difference Tuesday, when turnout for the runoff is expected to be very low. There is hope in the Bostic camp that the candidate might get an endorsement from Sarah Palin, who in the past has been able to transform underdogs into winners, as when her 2010 support helped Nikki Haley become South Carolina’s governor. It was Haley’s choice of Tim Scott as this state’s first black Republican senator since Reconstruction that opened the congressional seat that Sanford and Bostic are now fighting for, and so it would in some sense be less than coincidental if the Palin lightning struck again here.

Bostic’s debate performance was strong, as he counter-punched sharply against his better-known rival. When Sanford tried to make an issue of the fact that Bostic had missed county council votes, Bostic replied by explaining that he was absent from meetings because he was attending to his cancer-stricken wife. When Sanford talked about a budget increase in the county, Bostic shot back, “Tell the whole story” and explained that Charleston County voters had passed a referendum for a sales tax to expand transportation spending (a referendum that Bostic said he personally had voted against). And after Sanford used the phrase “wounded warrior” to describe the damage from his adultery scandal, Bostic invoked his own Marine Corps service in Operation Desert Storm: “He’s not a wounded warrior. I have friends who are wounded warriors.”

The wounds suffered in political combat are only metaphorical, but the damage can be quite real. Republicans were wounded badly by last year’s defeat, and are now hoping they don’t suffer a self-inflicted wound in next week’s runoff.