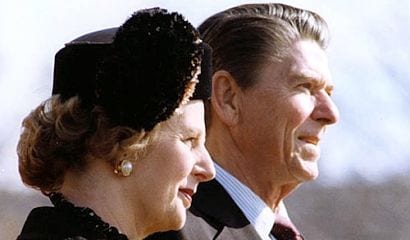 On the news of Margaret Thatcher’s passing, several television commentators asked variations of the question that followed Ronald Reagan’s nearly nine years ago: “When will see another like her again? The answer in both case is, “never.” Both were sui generis — one of a kind.

They had several things in common: well-developed character, clear policy objectives, articulate expression and, most of all, determination to succeed. From the moment they first met, in April 1975, it is as if they had been friends and allies for years. I know. I was there.

It was barely three months since the end of his second term as Governor of California. Our new office was in Los Angeles. He had been invited to address the annual meeting of the Pilgrim Society in London in April. This group celebrated British-American cohesion based on the historic voyage of the pilgrims to New England. A mutual friend arranged for Mr. Reagan to call on Mrs. Thatcher the next day. He was looking forward to it with great enthusiasm. He was not disappointed.

The Conservative Party had done little to reverse economic malaise. Now, the Labour government was intent on enlarging the already large role of welfare statism. Margaret Thatcher, to put it mildly, disagreed. At Oxford (where her academic major was chemistry) she had been influenced by Friedrich von Hayek’s The Road to Serfdom with its message that rampant state intervention leads to authoritarian government. In 1959, she won a seat in Parliament.

Ronald Reagan first met her just after she had challenged and defeated Edward Heath for the Conservative Party’s chairmanship. We called on her in her office in the Parliament building. Her reception room was barely large enough for two of them and one aide each, Derek Howe for Mrs. Thatcher and myself.

The two had heard and read so much about each other that they immediately fell into comparing notes on the shortcomings of government in their respective countries: undue regulation, growth-stunting tax policies, lack of encouragement of individual initiative. They even found they had similar childhood living arrangements. Thatcher, a grocer’s daughter, was raised in a flat above one of her father’s two stores. Reagan, the son of a shoe salesman, was born in a flat above a bakery across the street from the store.

After an hour or so. Mrs. Thatcher had to excuse herself for another meeting; however, she had arranged for us to meet with several of her colleagues in a conference room on another floor.

Three and a half years later, in November 1978, the principals met again, on the eve of Mrs. Thatcher’s party winning the government and her becoming Britain’s first women (and, ultimately, longest-serving) prime minister. For Ronald Reagan, this was the first stop on a listen-and-learn trip to European capitals as a prelude to his 1980 campaign.

By now she had a slightly larger office and the reception room could hold the same four people, plus Richard Allen (who become President Reagan’s first National Security Advisor). This time much of the discussion was on Soviet expansionism and defense measures. She emphasized the fact that Soviet SS-20 intermediate-range ballistic missiles were aimed at every Western European capital.

This sunk in with Reagan. Later that year, he would visit NORAD, the U.S. early-warning system in a Colorado mountain that could spot an IBM fired toward the U.S. Then, after a briefing about the Carter Administration’s new treaty based on Strategic Arms Limitation Talks (SALT II), he said what we needed instead, was START (Strategic Arms Reduction Talks). And, as president in early 1983 he orchestrated acceptance of U.S. missile defense systems to protect Western European capitals. This would prove to be an important step in his carefully planned strategy to bring the Cold War to a successful conclusion.

Their friendship endured through all the years shared years in office and beyond. In 2004, she, by now Baroness Thatcher, gave one of the most eloquent eulogies at Ronald Reagan’s funeral. Each imparted strengths to the friendship: he charisma and an understanding of how to use U.S. strength in the world; she, intellectual rigor. Both were natural leaders.