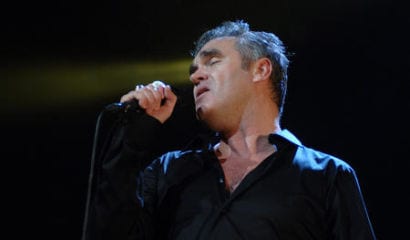 “No British politician has ever been more despised by the British people than Margaret Thatcher,” moody crooner Morrissey contends. “Thatcher’s funeral on Wednesday will be heavily policed for fear that the British tax-payer will want to finally express their view of Thatcher. They are certain to be tear-gassed out of sight by the police. United Kingdom? Syria? China? What’s the difference?”

Aside from the smell, a big difference is that people vote in the United Kingdom. In 1979, 1983, and again in 1987, the British people voted for the Conservative Party, which Margaret Thatcher led. If Brits so “despised” Thatcher, why did she hold office longer than any other 20th century UK prime minister? Also, people in the United Kingdom exercise the right to tastelessly celebrate the deaths of political figures. In Syria, opposing a leader means your home gets shelled; in China, one runs the risk of getting run over by a tank. Oh, yeah, China and Syria didn’t produce the Magna Carta, Shakespeare, The Beatles, or Monty Python. But other than that, Morrissey’s analogy holds.

Pop stars, unlike politicians, don’t run the risk of ruin by exhibiting a tenuous relationship to reality. To Morrissey, who quit a job to go on the dole around the time Mrs. Thatcher’s political star rose, “She simply did not give a s#!+ about people.” Moz’s recent string of canceled tour dates, and his misanthropic oeuvre (who wishes for a nuclear Armageddon or getting hit by a double-decker bus?), suggests projection.

Not every fading performer echoed Morrissey. Johnny Rotten, insanely the voice of sanity here, called Thatcher’s tormentors “loathsome.” The Sex Pistols singer explained, “I’m not going to dance on her grave. I was her enemy in her life but I will not be her enemy in her death.” When Spice Girl Geri Hallowell tweeted her respects to the “first lady of girl power,” the venomous reaction from the anti-social types lurking on social media prompted her to apologize to anyone she had offended. It’s a strange world where a condolence prompts controversy.

Thatcher came from the “people” Morrissey claims she didn’t care about. She grew up above her father’s market. In politics she relied on the “practical economics” of her grocer dad, which she articulated as matching the “entirely justified lack of faith in the wisdom of the state” with “a renewed confidence in the creative capacity of enterprise.” By the late 1970s, many British people similarly wondered why their government ran an airline, where a fifth of the British pound’s value had gone in a year, how a trade union leader could halt much of a nation’s production, when it became preferable to collect a check rather than work for one, and who would rescue them from this lunacy. They didn’t much wonder any of this after Thatcher departed as prime minister in 1990.

Thatcher’s “practical economics” resulted in a stronger Britain and a weaker Left. This naturally inflamed uber-wealthy rock stars, who went to great lengths to legitimize their status as Hessians fighting for the poor in the class war by trashing Thatcher in life — as many now do in death.

Morrissey’s “Margaret on the Guillotine,” from 1988’s appropriately titled Viva Hate, rhapsodizes: “The kind people have a wonderful dream/Margaret on the guillotine… Please die.” “What have we done?” Roger Waters laments on 1983’s The Final Cut. “Oh, Maggie what have we done to England?” “When England was the whore of the world, Margaret was her madam,” sang Elvis Costello on his 1989 comeback album Spike. “When they finally put you in the ground/I’ll stand on your grave and tramp the dirt down.”

Full confession: My collection boasted these and other Maggie-hating albums during the 1980s. Their politics were about as captivating as Thatcher’s songs. But the music was great. In their attempts to artistically convey Thatcher’s malevolence the performers instead demonstrated their own. The prolonged two-minute hate witnessed by the world since Lady Thatcher’s death has similarly unleashed unintended consequences.

Does popping a champagne cork and dancing a jig upon news of a human being’s passing make others join in despising the departed or prompt a sense of revulsion at the gleeful crepe hangers?

Some people just don’t get their own irony.