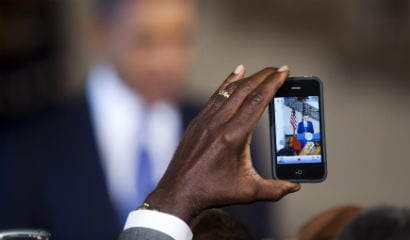 THERE HAS BEEN MUCH WRINGING OF HANDS over how the Obama campaign’s use of big data and technology was (and is still) so much more advanced than anything we have on the right. Much of this concern is grounded in reality. The left has a big advantage here, and it’s one post-election problem that the GOP must tackle.

The Obama campaign used a data analytics program that had been perfected over six years, and which broke the electorate down into very small and targeted subsets of demographics (think single Hispanic women living in Colorado). This approach was unprecedented in presidential politics: a national campaign waged as a very personal appeal to small groups with specific messages tested for each demographic.

But even taking that into account, the biggest gap we have with regard to databases and technology is not on the technical side. The real issue is whether the right will accept the idea that data and technology should be so integrated into our decision making, get-out-the-vote operations, and messaging efforts, that it becomes a part of our DNA.

We should acknowledge the fact that despite the chest-thumping (which in some ways is justified) by Obama and his campaign, the election was cumulatively decided by 482,000 votes, when you add up the president’s margin of victory in Ohio, Florida, Virginia, and Iowa. Had those states and their electoral votes gone to Mitt Romney, he would be in the White House.

Apart from the relatively close nature of the race, one of the great advantages that Obama’s team had was time. They spent six years perfecting their data analytics. Then 18 months before the 2012 election, they began investing heavily in technology. By the time all was said and done, Obama had more than 300 engineers and digital staff on his team. They built tools like a computer program called Narwhal and an accessible organizing network called Dashboard. And, of course, they did some serious data crunching. Romney’s campaign really only began investing heavily in data and technology in the late spring of 2012.

In addition, there is no doubt that Obama’s team was far superior to Romney’s in terms of sheer talent and experience. For instance, Harper Reed, the chief technical officer of the Obama campaign, was the CTO of the online T-shirt company Threadless for nearly five years, and he had significant experience and success in crowd-sourcing and cloud computing in the private sector.

Despite these disadvantages, the GOP can make up the data and technology gap in a relatively short time. There are naysayers, but I believe that with the right investment, the hole could be closed in less than a year. There is real talent on the right that can build the necessary tools. The fundamental question is whether conservative leaders will truly commit not only to gathering the data and building the tools, but to actually implementing them on a wide enough scale to make an impact. The best technology in the world means nothing until it can be placed in the hands of tens of thousands of grassroots activists.

Technology is important. But being there is far more important. And by “there,” I mean in local communities every day, for years.

Those on the left were in communities, developing personal relationships, giving a face and a human touch to everything they were working on, and quite frankly, showing that they care (the cynic would say their caring has ulterior motives, but at least they’re doing something). This last lesson is critical to understand: While we do live in the 21st century, with all its amazing technology, we are still social creatures who crave personal relationships, desire special attention, and want to know that we are unique. All the tools in the world won’t ever change this fundamental part of the human equation—though data, information, and technology can certainly reinforce it when applied properly.

What is also important about permanently having organizers in local communities is that, as a rule, unless there is someone on the ground making something happen, nothing typically happens. Instead, many times the right appears to operate under the adage, “I told someone to do something…so nothing got done.” There are some conservative organizations like American Majority and Heritage Action already headed down that path by trying to establish a permanent presence in communities and developing tools like Voter Gravity. But all such efforts, on both fronts, must become more robust if conservatives are ultimately to win.

We can bridge this gap. But we need to get started, and quickly.