News Politics What's in a Name? - The American Spectator | US News
Menu
News
What’s in a Name?
by Bill Barnwell 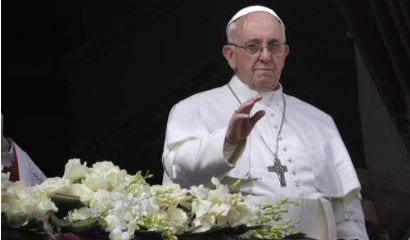 THE HOLY SPIRIT, according to the band U2 and also the Hymnal, “moves in mysterious ways.” On March 13, many people were shocked to learn from St. Peter’s Square that after two brief days of prayer and politicking, the College of Cardinals had elected the first man from the New World and the first Jesuit as pope.

Yet the real doozy was that name: Francis. The former Argentinian cardinal Jorge Mario Bergoglio of the very learned Society of Jesus had taken his papal name from the eccentric, populist, arguably anti-intellectual founder of the rival Franciscan order. Several serious analysts simply could not accept that decision.

After all, one of the founders of the Jesuits was St. Francis Xavier. Surely the new pope had meant his name to be at least a partial recognition of his own religious forebear. “I won’t be shocked if eventually the Vatican issues a statement with a nod to that saint, as well,” wrote veteran religion writer Jeffrey Weiss on my own RealClearReligion.org.

Alas, no. The new pope has been forthright on the subject of his choice. Once he was picked as the monarch of the Catholic Church, his former colleagues encouraged him to adopt various monikers to send a message. He brushed past all of their ideas and settled on Francis because, he explained, St. Francis of Assisi cared deeply for the poor and was, after one disastrous military campaign as a hot-blooded youth, a man of peace. These things seemed to Bergoglio to be self-evidently worthy of celebration.

A “poverty and peace” papacy is bound to make conservatives nervous. Much of the fire directed at Francis has come from both Catholic and secular conservatives.

On Holy Thursday, Francis could not be found saying Mass at one of Rome’s historic churches. Instead, he visited a local prison for young offenders, and boy did that ever cause a ruckus.

In the annual foot-washing rite, the presiding priest imitates Jesus Christ at the Last Supper by washing, drying, and kissing the feet of 12 people; Francis did just this for a fairly random cross-section of inmates. Because the facility is co-ed and houses prisoners of all or no faiths, Francis prostrated himself before the feet of two women and two Muslims—and one, a female Muslim, was a twofer.

Catholics of a traditionalist bent vented their extreme displeasure. They had a legitimate gripe according to current canon law, though the pope is allowed to rewrite that law pretty much at will. In theory, the Catholic Church has long held that the foot-washing ceremony, as a reenactment of the Last Supper, should be limited to men. The thinking goes that Jesus Christ chose only men as his 12 apostles for a reason (thus the all-male priesthood), and that in reenacting Jesus’ actions, churches should accurately portray this.

In practice, on Holy Thursday popes have typically washed the feet of a dozen priests, while in much of the rest of the world priests have drawn both men and women from congregations and sponged freely. Some traditionalists, such as the conservative canon lawyer Ed Peters, have long campaigned for the Vatican to put a stop to all this dangerous bisexual foot-washing anarchy.

Why this was such a big deal is hard to figure. On the list of liturgical innovations—dividing and moving altars to make the priest into more of a preacher, dumping the handshake of peace right in the middle of the landing stretch of the Mass, basically banning the Latin Mass in many dioceses—it seems a pretty minor one.

While the Gospels don’t portray Jesus washing the feet of any women, they do quite memorably portray the opposite. In one of the more poignant passages of the Bible, a weeping woman washes Jesus with a bottle of crazy expensive perfume and dries his feet with her hair. If that isn’t enough to get women some tacit consideration in the annual foot-washing rite, maybe the feminists are on to something. But seriously, anyone who thought that a pope who named himself after a saint who famously embraced lepers wouldn’t also embrace women was not thinking very clearly.

Some secular conservatives such as Pamela Geller were fine with Francis embracing women but not Muslim women. Geller, who was one of the chief campaigners against building a Muslim outreach center near Manhattan’s Ground Zero, charged Francis with “dhimmitude” because he cleansed the feet of two believers in Allah. She sees in Francis’ gracious actions a portent of weakness in dealing with the Islamic world.

One wants to put a rather pointed question to Francis’ foot fetishists: Will you change your mind if one or both of those Muslims converts? It’s not a bad bet. Here you have the head of the largest religion in the world humbling himself to the point of washing and kissing the feet of young people without the restraint or the clout to stay out of prison.

Some would see that as weakness, but if so it’s a weakness entirely consistent with the Christian story, in which God humbled himself and became a man and a prisoner—a death row inmate, if you will—entirely by choice. That story has been pretty good at attracting converts for the last couple thousand years.

THIS DOESN’T MEAN Francis is a theological liberal. Far from it. The Argentinian caught the eye of John Paul II in the first place by holding the line against liberation theology. He led the fight against gay marriage in his country, and on most issues that conservative Catholics profess to care about—from the protection of innocent human life, to the importance of family, to women’s ordination—he is resolutely on their side.

Francis says he wants a “poor church,” and, like his namesake, he leads by example. He has always chosen to live more simply and more cheaply than he could, given his high position. He eschewed cooks, chauffeurs, and the like, made a point of paying his own bills, and is currently driving his handlers in Rome crazy by shrugging off some trappings of his office. Plenty of whispers out of Rome say that he is seriously contemplating hacking the Vatican bureaucracy roughly in half.

In a similar reformist vein, Francis has exhibited very little hesitation on the subject of what should be done about priests caught up in sex abuse. They should be defrocked and prosecuted. Will he lop some heads off of the bishops who sheltered them as well? At some not-too-distant point, his answer to that question will have serious ramifications for the future of the Catholic Church around the world, and especially in the United States.

According to early surveys, Francis has struck the great apolitical mass of Catholics in America as a winning choice. Maybe they’re right about that, maybe not. Like St. Francis, he really is a remarkable figure utterly committed to the idea that the most liberating thing one can do is serve one’s fellow men by leading them to God.