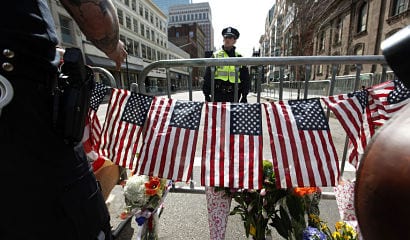 Patriots’ Day, a major holiday in Massachusetts, strikes much of the rest of the country as a curiosity. At college, a New Yorker begrudgingly announced his admiration for the Bay State for honoring their football team with an official holiday. A Giants fan, he hoped the Empire State would soon embrace such public-spiritedness in support of Big Blue. Perhaps New York’s three professional football teams, he theorized, had prevented a statewide consensus in choosing an NFL franchise to celebrate with a day off.

Though the undergraduate receives an “F” for history, his understanding of Patriots’ Day as a sports-oriented jubilee isn’t far off the mark. For more than a half-century, Major League Baseball has scheduled a home game for the Red Sox on the date, with the first pitch usually slated for 11 a.m. to allow fans to flow out of Fenway Park into Kenmore Square to watch the Boston Marathon runners race down the home stretch once the game has ended. The holiday often witnesses the Bruins and Celtics embroiled in playoff series. On a Patriots’ Day weekend in 1985, local boxing hero Marvin Hagler knocked Thomas Hearns into another mental dimension in a savage three-round sprint that resembled anything but a marathon. The Patriots, alone among the local sports institutions, take a holiday on Patriots’ Day.

Before making news Monday, Patriots’ Day served as a festival of weather as much as it did a festival of sports. The third Monday in April acts as the point on the calendar when a snowed-in city rejoices in its liberation from King Winter, surely a tyrant more oppressive than King George. The sun just shines brighter after enduring one hundred inches of snow.

The meteorological gods generally cooperate even when the city’s sports gods don’t. When the Milwaukee Brewers dropped 18 runs on the Red Sox in a 1990 Patriots’ Day shutout shellacking, the day couldn’t be ruined for me as it was for Mike Boddicker. After selling a dozen or so trays of Coke inside Fenway Park, I walked a few hundred yards to Commonwealth Avenue to watch Italy’s Gelindo Bordin become the last white guy to win the world’s oldest marathon. Eyeballing the planet’s fittest human beings as I gobbled up a greasy cart-bought sausage sandwich — a delicious reward bestowed through the generosity of fans’ tips — made the event particularly sweet.

This week, when Patriots’ Day graduated from weather and sports to lead story, its bread and circuses quality faded into the background. Monday reinforced both why and what we celebrate.

Spectators and first responders rushing into the danger zone to aid the bloodied and dismembered victims provoked thoughts of the events that defined the region 238 years earlier. As Ralph Waldo Emerson rhapsodized,

Spirit, that made those heroes dare
To die, and leave their children free,
Bid Time and Nature gently spare
The shaft we raise to them and thee.

The Minutemen grasped on April 19, 1775 that free isn’t. Dozens paid dearly for it. Like the heroes of this Monday past, they didn’t anticipate the dangers that enveloped them. A bad situation brought out the best in them. They rose to an occasion they didn’t seek.

Certainly 80-year-old Samuel Whittemore didn’t expect a fight to the death when he awoke on April 19, 1775. Yet, before sunset he had killed three Redcoats. The reward for his efforts included enduring repeated bayonet strikes and getting shot in the face. About a quarter mile and two centuries from the house in which I grew up, the left-for-dead octogenarian commando arose from a puddle of blood and began to reload his musket.