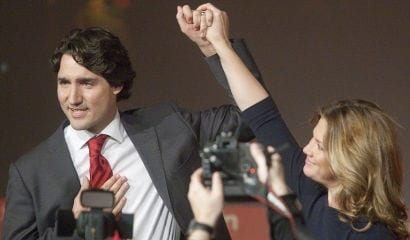 Justin Trudeau’s first act as leader of Canada’s Liberal Party should have been simple enough. Less than 24 hours after being chosen for the post, the Boston Marathon bombings took place. All Trudeau had to do was express his sympathy for the victims and solidarity with the United States. Instead, he said this:

We have to look at the root causes. Now, we don’t know now if it was terrorism or a single crazy or a domestic issue or a foreign issue.

But there is no question that this happened because there is someone who feels completely excluded. Completely at war with innocents. At war with a society. And our approach has to be, okay, where do those tensions come from?

If it was terrorism?

Someone who feels excluded?

Naturally, Prime Minister Stephen Harper was appalled. Harper replied to Trudeau’s statement while in London to attend Margaret Thatcher’s funeral. Without mentioning Trudeau by name, Harper made his contempt for the new Liberal leader’s position clear:

When you see this type of violent act, you do not sit around trying to rationalize it or make excuses for it or figure out its root causes. You condemn it categorically, and to the extent you can deal with the perpetrators, you deal with them as harshly as possible.

Yet I am sure that Trudeau’s statement came as little surprise to Harper. In 2011, Trudeau objected to a Canadian government brochure for immigrants describing honor killings as “barbaric.” Just last December, Trudeau raised eyebrows as a keynote speaker to an Islamic conference in Toronto that was sponsored by an organization with links to Hamas (which withdrew its sponsorship just days before Trudeau was due to speak).

But what makes Trudeau’s statement about the Boston Marathon bombings so remarkable is how they stand in contrast  to his father, Pierre Eliot Trudeau, who served as Canada’s Prime Minister from 1968 to 1984 (briefly interrupted by the short-lived Tory government of Joe Clark in 1979).

The elder Trudeau was tested by terrorism early in his first term. The Front de Liberation du Quebec (FLQ) was a Marxist group dedicated to attaining Quebec independence by violent means. Founded in 1963, the FLQ was known in its early days for setting bombs on Canadian government property, mostly mailboxes and military armories. By 1969, the FLQ escalated its violent campaign. In February of that year, the group bombed the Montreal Stock Exchange, injuring 27 people. Seven months later, it set off a bomb in the home of Montreal mayor Jean Drapeau. But the FLQ wasn’t done.

On October 5, 1970 (more than a year before Justin Trudeau was born), the FLQ kidnapped James Cross, the British Trade Commissioner. Five days later, it kidnapped Pierre LaPorte, Quebec’s Minister of Labour. This act of terrorism would become known as the October Crisis or the FLQ Crisis. Although Cross was eventually released, LaPorte would be murdered by the FLQ.

Trudeau responded to this crisis by putting Canada’s military on the streets of Ottawa, Montreal, and Quebec City before persuading Canada’s parliament to pass the War Measures Act, which effectively put Canada under martial law. Seventy-two hours before invoking the War Measures Act, Trudeau had a confrontation with CBC reporter Tim Ralfe on the steps of Parliament Hill. The two men disagreed over law and order and civil liberties:

RALFE: I still go back to the choice you make and the kind society you live in.

TRUDEAU: Well, there are a lot of bleeding hearts around who don’t like to see people with helmets and guns. All I can say is go on and bleed. But it’s more important to keep law and order in this society than to be worried about weak-kneed people who don’t like the looks of a soldier.

Could you imagine President Obama referring to his constituency as bleeding hearts?

Unlike his son, the elder Trudeau did not concern himself with the root causes of the FLQ’s actions nor did he concern himself with whether FLQ members felt completely excluded from society. If Pierre Trudeau was still alive and heard what his son had to say about the Boston Marathon bombings, it is quite reasonable to argue that he would tell his son that he is acting like a bleeding heart.

But Pierre Trudeau is dead and gone and Justin Trudeau could one day be elected leader of our neighbor to the North. Therefore it is incumbent upon us to just watch him.