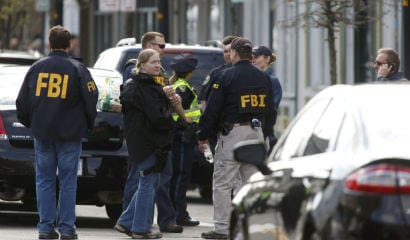 The day after the Boston Marathon bombing, most well-adjusted Americans were feeling a cocktail of emotions: anger at the perpetrators of such a grisly act, sorrow for the dead and their families, hope for the 264 who were injured.

Over at Salon.com, the now-infamous David Sirota was wishing that the bombers were white males:

[R]egardless of your particular party affiliation, if you care about everything from stopping war to reducing the defense budget to protecting civil liberties to passing immigration reform, you should hope the bomber was a white domestic terrorist. Why? Because only in that case will privilege work to prevent the Boston attack from potentially undermining progress on those other issues.

Sirota tried to claim in a subsequent column that he was worried Americans would overreact to a Muslim attack. But that above paragraph is clear: He wanted a white bomber because that would be less disruptive to political initiatives that he supports.

Sirota was overwhelmingly condemned and mocked across the blogosphere. But most of that derision was directed at his racial assumptions. Left largely untouched, and worth exploring, is why his first response to a gruesome attack was political at all. If Sirota was asked to give a eulogy at a funeral, would he sullenly read from a list of left-wing political positions and extol how the recently departed measured up to each one? Would he then give a somber reading from Chapter 4, Verse 2 of the Democratic Party platform? What the hell is wrong with people who react this way?

Sonny Bunch recently wrote an excellent piece about how we empty our lives when we become overly politicized. This is never more evident than after a major tragedy, when various mouth-breathers demand that we enact this or that political agenda in order to make sure This Never Happens Again. If only we’d listened to them earlier, say the mouth-breathers with sagacious shakes of their head, we might have been able to prevent the act of destruction. But now that it’s occurred, our only choice is to surrender to their emotional authority. Then the ambulance stops and they bump into the back of it.

We saw this following the Newtown shooting. Consider that one political writer’s first response, tweeted less than an hour after Adam Lanza stormed into Sandy Hook Elementary, was a sneer directed at pro-gun advocates. Or that Think Progress immediately ran a raft of headlines on its front page about gun control under an image of crying children being evacuated. While most Americans were numb, these commentators’ minds immediately sprang to politics.

In addition to being ghoulish, there’s an element of opportunism at work here. The effective result of these reactions is to use a tragedy as political leverage. This isn’t to say that we can’t learn anything from shootings or bombings; such events represent breakdowns in certain systems that we must acknowledge and scrutinize. But the aftermath of mass death, when we’re all shaken and raw, is not the time to be making sweeping federal decisions.

But for the politicized man, who crams politics into everything, tragedies are a type of emotional ammunition. A serious crisis can’t go to waste, as a certain Obama lieutenant once said.

Both sides aren’t equally guilty of this. As Forbes noted, leftist websites politicized the Newtown shooting far earlier and more often than conservative ones did. And you’ll be hard-pressed to find a prominent conservative analogue to David Sirota in the wake of the Boston attack, one who reacted so immediately and obnoxiously. Much of this is a difference in ideology: Conservatives generally don’t believe in using federal legislation to solve problems; liberals do, and therefore harping on tragedies benefits the left. But it’s wrong all the same, regardless of who does it.

(Some liberals might be tempted to counter that conservatives are politicizing Kermit Gosnell’s murders, since many, including myself, are calling for a change in our thinking on abortion. But the grand jury report on Gosnell’s crimes was released more than two years ago and specifically fingers pro-choice politics as an enabler. The conservative response to Gosnell has been a slow awakening to the enormous regulatory failures surrounding the clinic, not a drive-by politicization before the blood is dry.)

I’m occasionally asked for advice by aspiring political writers. My first recommendation is always: find something you care about beyond politics. Have a healthy sphere of your life where poll numbers can’t reach. Hold political opinions, but also read up on literature, art, sports, religion, philosophy, television, movies, culture, whatever. This isn’t to sound like some pompous Man in Full — I write almost exclusively about political issues — but rather to warn against letting politics consume every facet of our lives. Otherwise we risk descending to a state where we see an injury report on TV and immediately scream, “Legislation!!” or “Racism!!” Such people need to venture outside Washington, or at least shut off the Internet for a few hours.

And besides, once all the postmortem political jostling is over, we usually learn that tragedies don’t fit into our neat solutions. Our own Luca Gattoni-Celli has copiously documented why proposed gun control laws wouldn’t have prevented the Newtown massacre. According to later news reports that seemed to mock those calling for more mental health regulations, Adam Lanza may have snapped precisely because he was afraid of being committed to an institution. The Boston bombing suspects are both white Muslims, tripping David Sirota on his own shoelaces. The best evidence obtained by Boston authorities came not from a Bloombergian surveillance web, but from a simple Lord and Taylor security camera.

The next time something terrible happens, we should resist running to the Capitol building or bludgeoning our political opponents. A far wiser, if less satisfying, course of action is to take a deep breath and grieve.