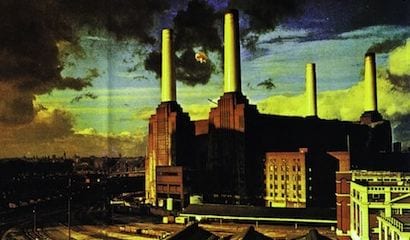 It’s difficult to name a figure that remained a relevant part of the rock music scene for as long as Storm Thorgerson. From the late 1960s until his death last week, the almost-anonymous artist plied his trade on some of the most recognizable albums of the modern era. That he did so without playing an instrument, writing a song, or singing a note makes his feat of longevity all the more amazing.

You may have recognized Thorgerson’s work on Pink Floyd’s Wish You Were Here, Black Sabbath’s Technical Ecstasy (1976), or Phish’s Slip Stitch to Pass (1997). Along with his collaborators at Hipgnosis, Thorgerson designed cover-art images that often endured longer than the music associated with it.

Led Zeppelin’s Presence (1976) and Pink Floyd’s Ummagumma (1969) illustrate the point. The former, whose expectations exceeded sales, served as a longtime staple of second-hand shops. The latter, essentially solo works packaged under a band name, proved the adage that the sum is greater than its parts. We don’t much listen to those albums anymore. But we remember their covers.

Ummagumma’s depiction of Pink Floyd in infinite regression, with subsequent iterations alternating the poses of band members, plays with the brain much like the group’s music did. Even hardcore Zeppelin fans may not recall the words to “Tea for One.” But they still attempt to decipher the meaning of that abnormal object that an eerily normal family wondrously gazes upon on the record jacket of Presence. Even when rock’s greatest bands didn’t deliver, Storm Thorgerson did.

Thorgerson’s defining work—a simple triangular prism working its magic set to a space black background—appears on Pink Floyd’s Dark Side of the Moon (1973). What the image has to do with the life cycle, madness, giving a “short, sharp shock,” or any other theme on the sonic masterpiece has escaped my ears. But that prism means “Pink Floyd” as much as the golden arches mean “hamburger hangover.” It may not amount to much as a work of art. But as a means of corporate branding The Dark Side of the Moon cover eclipses just about any logo encountered at the mall.

His greatest critical if not commercial triumph may have come not with his pre-fame friends in Pink Floyd but with a similarly experimentally minded artist. Peter Gabriel didn’t name his early albums. Hipgnosis’s cover art did. The singer’s third solo effort, officially titled Peter Gabriel like the two albums preceding it, unofficially became “Melt” because of the arresting black-and-white image of the singer manipulated to look as though his flesh dripped off his face. Thorgerson created that one, as well as “Scratch,” in which Gabriel’s fingernails leave a trail of white streaks. Thorgerson’s car appears on—what else?—“Car” by Gabriel. Akin to The Beatles’ “white album,” Gabriel’s early releases go by the names the cover graphic bestowed upon them rather than their proper titles.

It’s easier, less expensive, and more efficient to photoshop a pig flying above an industrial plant or to place an infinite number of hospital beds on a beach with digital trickery. But it’s not better. The surreal quality of Thorgerson’s work relied upon the image being real. On Catherine Wheel’s Happy Days (1995), for instance, Thorgerson’s team built an enormous crib to present singer Rob Dickinson as though a baby. He could have drawn this or achieved a similar effect through composite photography. But in the age of computer-generated graphics, our eyes don’t trick our brains the way they used to. So, Thorgerson and his Hipgnosis collaborators avoiding shortcuts meant that eyes just couldn’t avoid their handiwork. Storm Thorgerson’s artistic vision didn’t fit in a world that confused doing it cheap for doing it right. It stood out.

If cassettes and CDs supplanting vinyl didn’t signal the end of cover art, then certainly digital downloads did. The LP record awarded Thorgerson a canvass a foot long by a foot wide. Steve Jobs reduced these visuals to roughly the size of a Starburst candy. Small is the new big. Something gained, something lost—what we reclaim in shelf space we miss in aesthetic beauty.

Storm Thorgerson understood visual for people who understood aural. He also knew when to die. Cover art, like the vinyl discs they protected, play about as vibrant a role in contemporary pop culture as the Victrola. Album art is sadly gone. So is the man who most excelled at creating it.