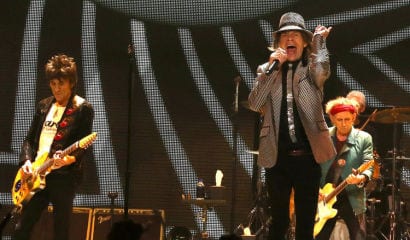 The Rolling Stones kick off their “50 and Counting” North American tour at the Staples Center in Los Angeles tonight. Their tour name indicates that they’re old (50-plus years in business) and that they’re greedy (counting, as in money). These factors appear to finally have caught up to the corporation that was an amazing rock band when Boog Powell was an amazing baseball player.

“It’s a disaster,” Bob Lefsetz writes. “The bottom just dropped out of the Stones business.” The Lefsetz Letter instructs disbelieving readers to query AXS.com to gauge the availability of tickets, which I dutifully did. Sure enough, blocks of seats for tonight’s show at $600, $450, and $250 a pop remain readily available.

The Stones released a limited number of $85 seats — for the people! — that fans quickly snatched up on their ten-city North American tour. But when the cheap seats remain beyond the reach of the mass of fans, the mass-market phenomenon necessarily becomes a niche-market phenomenon. The turnoff stems as much from the dishonesty as it does from the extortionate pricing. For the privilege of buying a $600 ticket, patrons pay a $40 “convenience fee.”

The Newspeak, adding insult to financial injury, surely best explains the success of Kid Rock’s “$20 Best Night Ever” tour. The price of admission, which will also includes Kool & the Gang or ZZ Top as an opening act depending on the venue, remains the same $20 for the first row, the last row, and everywhere in between. The genre-jumping showman, who visits outdoor-amphitheatre sheds from June into September, also boasts free post-show coffee, free Jimmy John’s sandwiches in selected lots, cheaper parking, $4 beer, $20 t-shirts, and, most conveniently for fans, no “convenience fee” for tickets when purchased at Walmart.

He’s moving tickets faster than you can say “bawitdaba.”

Kid Rock never learned about unitary elasticity or supply and demand in an economics classroom. He discovered it on a tour bus. The $20-admission idea came to Rock a few years back when he engineered a t-shirt price reduction from $40 to $20. He made the same amount of money by doubling merchandise sales. He hopes his ticket pricing experiment works even better — for the sake of everybody’s wallets. It may even shame other acts to get their avaricious acts together.

The public’s current demand for Kid Rock may not be as high as when he released the 11-times platinum Devil without a Cause in 1998. But their demand for affordable concert tickets has never been greater. In 1989, when I scalped $29.50 Rolling Stones tickets for $60, the band, and me, piggishly pushed the boundaries of what fans would pay. By 2000, the average concert ticket had spiked to $41. Last year, it approached $70.

Counterintuitively, cutting prices makes Kid Rock a shrewd capitalist, not a philanthropist — as his liberal admirers from Piers Morgan to Rolling Stone magazine would have everyone believe. Not only does he grasp the economic realities in Obama’s America, Kid Rock understands hype. Super-cheap tickets buy enormous publicity priced right at free.

Even the Atlantic, not heretofore known for pontificating about the on-goings of the stringy-haired performer once known as Robert Ritchie, expresses surprise that the “new populist performer” isn’t liberal Bruce Springsteen but “a Romney-supporting, registered Republican.” Writers who hate Kid Rock’s politics love his prices. Whereas Mick, Keith, and company alienate, Kid Rock connects in a way that goes beyond music.

“For our last number, I’d like to ask your help,” John Lennon petitioned an audience in 1963 that included the Queen of England. “Would the people in the cheaper seats clap your hands? And the rest of you, if you’ll just rattle your jewelry.” The quip tacitly acknowledged the awkwardness of royalty and rock n roll coexisting in one room.

Now musicians imagine themselves as rock royalty, and to afford concert tickets to see them it helps to possess the riches of royalty. As The Eagles, Fleetwood Mac, and Sting priced rock music out of popular music, country, pop, and rap took its place.

Three years after Lennon joked with the Queen, The Beatles, exhausted by a constant recording-filming-touring schedule, had played their last proper concert. Ticket prices ranged from $4.50 to $6.50 — and even the Fab Four couldn’t sell out Candlestick Park in 1966.

Is a ticket to see a broken-down Rolling Stones worth 100-times more than admission to see The Beatles in their prime? The empty seats at the Staples Center tonight will answer that question.