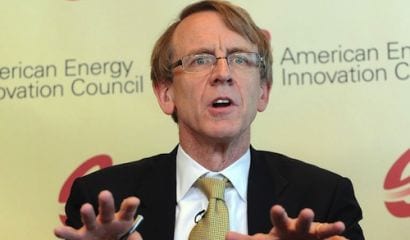 The story in the New York Times says Kleiner Perkins has been “humbled” by the past decade’s performance. That seems appropriate. The nation’s most famous venture capital firm had a stunning 35.7 percent annual rate of return in the decade of the 1990s. That was before they met Al Gore.

Somewhere around the time Gore had won his Academy Award for warning the world about global warming, the former Vice President was hired on as a senior partner at KPCB. Fortune wrote an article describing Gore sitting in the board room firing off ideas after calling Senator Barbara Boxer “on the way over” to get government on board.

Clean Energy! It was the Next Big Thing! Silicon Valley would do for the nation’s energy generation what it had done for computers — discover technological secrets that would change the whole game. And make money at it, too! After all, solar cells were made out of the same thing as computer chips, right? Silicon! If Silicon Valley could do for solar what it had done for the microchip — well, think of it!

Gore seems to have made out all right in all this. A report that came out about a year ago said his net worth had climbed from $2 million to $100 million since leaving the White House. But Kleiner Perkins and the rest of the Silicon Valley Green Team have been left holding the bag. KPCB has gotten stuck backing solar companies that promise a “breakthrough” by raising the conversion factor of sunshine to electricity from 18 to 22 percent. Vinod Koshla, another Silicon Valley honcho who promised to carry the country into a new era, hasn’t been saying much about clean energy these days, either. When last heard from, he was putting his money into food startups.

So what happened? Well, anyone with a fundamental knowledge of physics could have predicted this. At the core of this was the conviction that Silicon Valley was going to discover some “Moore’s Law of Solar Energy.” Oliver Morton, the editor of Nature, wrote all the way back in 2006: “If scientists can discover a Moore’s Law of solar energy, it could change the world.” Only a little more than a year ago, Paul Krugman, that renowned physicist, was still touting the same idea. It was all going to be so easy. According to Moore’s Law, the size of a computer chip space needed to seat the same number of transistors was shrinking by half every two years. Computers that once took up whole rooms could now be sketched on a silicon chip the size of your thumbnail. Solar cells are being sketched on silicon as well. If we can do the same thing…

There’s only one problem. Energy isn’t information. When you shrink a computer chip, you are increasing the amount of information that can be stored in the same space. That’s why computers can be miniaturized down to the atomic level. But you can’t shrink solar collectors. The amount of energy that the sun deposits on a square meter of earth at the 40th latitude is about 400 watts. At present rates of conversion, we can turn about 20 percent of that into electricity. That’s enough to power an 80-watt light bulb. With hard work in the laboratory, we may be able to raise that conversion level to 25 percent. That would be enough to power a 100-watt light bulb. But there won’t be any Moore’s Law advances.

Of course there is one other possibility. Most of the energy conversions we rely upon involve manipulating and relocating electrons, which carry significant amounts of energy but still constitute only 1/1800th of the weight of the atom. If you were to go down into the nucleus of the atom, among the protons and neutrons, you would find a vast store of energy that could be tapped — something on the order of 2 million times the amount per weight or volume. But that would be “nuclear energy” and not even Silicon Valley wants to touch that.

(To his credit, Bill Gates has made the same survey of America’s energy landscape and concluded nuclear is the way to go. His Intellectual Ventures decided to sponsor development of the Traveling Wave reactor, a futuristic design that produces no waste and does not have to be refueled for 50 years. Discovering that the U.S. Nuclear Regulatory Commission was backed up ten years considering new designs, he took the project to China. He is currently working with the Chinese National Nuclear Corporation.)

So Kleiner Perkins’ energy venture was doomed from the start. It was about this time that Silicon Valley decided to get off the fence and throw its political fortunes in with the Democratic Party as well. John Doerr became a principal advisor to the Obama administration, which started handing out big loans to green energy companies, which Kleiner Perkins took a stake in and… well, you can imagine the rest.

Compare all this to what has been going on in Texas, where good old-fashioned oil men who don’t want the help of the government and who just want to be left alone to develop their technology have nearly doubled the state’s oil production in two short years and helped create 17 percent of the new jobs in the nation with only 8 percent of the population.

Kleiner Perkins’ problems aren’t over. It’s about to take a $100 million hit on the Fisker, another great green idea that has fizzled, after receiving a $529 million loan from the Department of Energy. KPCB will probably never see another penny of its investment.

Maybe the board of directors should ask Al Gore for some of that $100 million back.