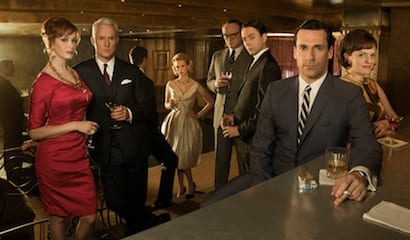 Although I enjoyed the first season of Mad Men, which aired in 2007, I got a bit bored with it thereafter. It seemed to me to have degenerated into mere soap opera. This was also true of The Sopranos, which the show’s creator, Matthew Weiner, had worked on before and which had just ended as Mad Men began. But there was always more to The Sopranos than the soap opera, which, as I wrote in these pages many years ago, it went some way toward reclaiming for real art. The Sopranos was alert to the piquant ironies of contemporary gangsters with nostalgia for a more heroic past, which most people nowadays know only through gangster films like The Godfather—and The Godfather was a constant presence in The Sopranos. The nostalgia in Mad Men is also secondhand, at least for anyone under 60. But we are closer to it—close enough for a target audience the age of the now-grown children of its main characters to experience, as Mr. Weiner himself does, as nostalgia for the lives of their parents.

To be sure, there has always been a moral edge to this feeling—what Mark Greif in the London Review of Books called “the genre of Now We Know Better”—in particular about all those things that the show’s characters take for granted: smoking, drinking, tranquilizers, and unhealthy eating, on the one hand; sexism, racism, homophobia, and lack of environmental awareness on the other. But under the mask of their disapproval, people love the show’s amoral ad-man hero, Don Draper (Jon Hamm), and envy him his freedoms, sexual and otherwise. It’s the spirit captured in Yeats’s poem “On Those That Hated The Playboy of the Western World”:

Once, when midnight smote the air,
Eunuchs ran through Hell and met
On every crowded street to stare
Upon great Juan riding by:
Even like these to rail and sweat,
Staring upon his sinewy thigh.

Moreover, unlike Don Juan, Don Draper has a conscience, sort of—or at least a degree of self-awareness, which, like that of Tony Soprano, makes it impossible for us to hate him. The climax of the opening episode of this, the sixth and (we are told) penultimate season, has our Don climbing into bed with the wife of a man he has befriended and telling her his wish for the New Year: “I want to stop doing this.”

Of course, he doesn’t really want to stop doing this—but, then, neither do we want him to stop, and not just because we envy him. For although I still find the Mad Men soap opera rather dull, I think I am beginning to understand its peculiar resonance with liberals and media types. Partly, this is owing to the fact that the show offers a retelling of the media’s view of American history, one whose landmarks consist of all those -isms that Don and his fellow Mad Men (women too, alas) are blithely unaware of, but that we know are to be gradually vanquished in the decades to follow until we arrive at our splendid selves, the perfection of the progressive conscience. This view of things automatically puts the viewer into a position of superiority vis-à-vis the show’s characters, and so creates the “Now We Know Better” syndrome.

That has drawn to the series a publicist’s dream of free advertising in the form of an endless stream of commentary on the show designed to demonstrate the commentators’ superior knowledge. Thus, the Mad Men “addict”—as such poor souls are often described—can have his choice of next-day media conversations about each episode at the New York Times “ArtsBeat” blog or Slate or Atlantic Wire or any number of other online venues that have been particularly assiduous in following the ins and outs of the show and identifying where it goes right and wrong. Are the black characters suffering enough? Are the female characters sufficiently aware of their exploitation by men? Do the men have any inkling of what unreconstructed chauvinists they are? In short, how soon can we expect these people to know everything we know—to be us instead of what they are, or were?

It’s a very odd sort of aesthetic pleasure to take in a dramatic representation, but it may be the only one available to progressives. There is another way, however, in which the bosom of the American left returns an echo to the story of Don Draper, for in many ways it is the left’s own story. Indeed, Mad Men could be seen as an elaborate parable, the key to which lies in Don Draper’s highly progressive insistence that his life moves in only one direction: forward. That is only what we should expect of an entirely self-invented man who is almost obsessive about cutting himself off from his past. He has disowned the family of his birth, such as it was, and taken a new name and a new identity—appropriated from a man killed next to him during service in the Korean War. He enjoys the liberation of being cut off from his past, but he also cuts himself off from his present, and the family he is ostensibly attached to through his two wives and three children, by frequent casual love affairs.

There is reason to believe that the sex in these relationships is of less importance to him than the anxieties and the dangers of being caught. He’s become hooked on the thrill he derives from making people believe he is the character he has invented for himself, while at the same time becoming less and less sure of who he really is. In this season’s first episode, Don drunkenly volunteers to be best man at the wedding of a stranger—a soldier on R & R from Vietnam—on a beach in Hawaii, and the photographer calls out, “Be yourself.” Don doesn’t know who, or what, his self is. As he says in the second season to his alter ego’s widow in California: “I have been watching my life. I have been scratching at it, trying to get into it, and I can’t.”

Perhaps that is the price he has to pay for being a “creative” in the go-go advertising industry of the 1960s. The word “creative,” which has since acquired some decidedly raffish human connotations, was expropriated for advertisers’ purposes when it was still wet with the dew of its association with a distinctly divine function. Doris Willens’ biography of Bill Bernbach (he of Doyle Dane Bernbach), something of a real-life counterpart of Don Draper minus the promiscuous sex, shows him as similarly secretive and close-mouthed about his past—a man who also asked: “What did the past have to teach? Every day was a fresh beginning!” The “creatives” in any agency were those whose job it was to imagine an ideal world to supersede, for at least so long as it took to buy the product, the one God has given us, just like the hucksters who peddled their Marxist utopia in the 1930s.

THE AMERICAN LEFT’S deceptive habit, perfected during the so-called McCarthy era, of disguising its true radicalism under the banner of the merely “liberal” or “progressive” became as difficult as Don’s to break. Further, this made the left even more resentful than it would otherwise have been of those who, as the left saw things, forced it to live a lie. These people were, like Don Draper and his Mad Men, a self-identified intellectual and creative elite who saw themselves as having been forced by the exigencies of “capitalism” to work for a brutish and uncultivated business class whom they regarded as manifestly beneath them. In both cases, the contempt felt for economic superiors who were intellectual inferiors had to be kept, for the most part, carefully under wraps.

Don’s function, then, is to act out the left-wing fantasy of deceiving the greedy and stupid businessmen whom “the system” has set above him, and at times, when he dares, defying them like the heroes of the left who refused to “name names.” Thus, apropos of new demands being made by Herb Rennet (Gary Basaraba), the brutish Jaguar dealer who in season five had demanded a night with the luscious Joan Holloway (Christina Hendricks) as the price of his account, Don asks, “Do we have to keep saying yes because we didn’t say no before? Do you know what this is? This is Munich!” When he subsequently tells Herb to take his account and shove it, all of Don’s “sexism”—he’s already shown himself to be above the racism and homophobia of the others—is redeemed in the eyes of those to whom he is a progressive hero for fighting their battles against the unenlightened, back in the days when, in their view, the unenlightened walked proud and virtually unchallenged among us. I’m not entirely persuaded that Matthew Weiner sees him, or the show, as they do. But he’s clearly canny enough to cater, like a good “creative” ad man himself, to his audience’s expectations.