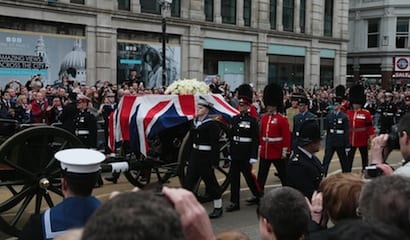 Margaret Thatcher’s funeral was a memorable, moving, and magnificent occasion. Obsequies for great statesmen can be tightrope walks across the divide between the temporal and the eternal. There are many conflicting pressures: past controversies, political sycophancy, private grief, and religious ritual. But this send-off produced a near perfect mixture of history and spirituality, high ceremonial and human touches. What made the occasion so special was that the great lady had chosen all the key components entirely herself.

There was, however, one moment she could not have controlled. For me and many others in the congregation, it elicited the deepest emotions of the day. As her casket was carried out of St. Paul’s Cathedral on the shoulders of military pallbearers while the choir sang Stanford’s Nunc dimittis in G, the first sight of her cortege by the crowds spontaneously produced a swelling wave of sound. It was so unexpected that those of us still seated beneath the great dome of Christopher Wren’s ecclesiastical masterpiece were startled.

The media had been predicting hostile protests, so we wondered whether we were hearing the ultimate anti-Thatcher demonstration. Far from it. Within seconds it became clear that the great roar rolling up from Ludgate Hill and other streets near St. Paul’s bore the unmistakable resonance of massive cheering.

What were those crowds clapping for? Many were too young to have known the age of Thatcher. Many more were likely to have disagreed with at least some of the radically conservative policies she championed. But almost all seemed ready to salute her courage, her strength, and her footprints on the sands of time.

Applause is usually thought inappropriate at a funeral, but Thatcher broke so many conventions and ceilings in her life that the shattering of one more custom in death seemed right. She would have enjoyed those cheers. They symbolized not only profound public affection but also her final handbagging of the loony left.

A handful of Marxists, mine workers, and militant socialists had gathered close to the cathedral to give their old enemy a farewell booing. I encountered some of them on the last stretch of my walk toward St. Paul’s. These would-be troublemakers were hostile enough to give me and others attired in our tailcoats a few jeers. But a friendly apple-cheeked woman in the same part of the crowd had a different message: “Don’t worry about them lot,” she said. “We’ll drown them out.” And they did.

IF THE CHEERING in the streets was the greatest surprise of the day, a close second was the sermon from the pulpit. Among the Church of England’s strengths are its beautiful choral music, ancient liturgies, and resounding hymns. But its spiritual trumpet tends to give a rather uncertain sound in this secular age. Not on this occasion. The bishop of London, the Rt. Reverend Richard Chartres, delivered the finest valedictory address I have ever heard. In the language of baseball, the bishop hit a home run.

“After the storm of a life lived in the heat of political controversy there is a great calm,” he began in his episcopal basso profundo. “The storm of conflicting opinions centers on the Mrs. Thatcher who became a symbolic figure, even an ‘ism.’ Today the remains of the real Margaret Hilda Thatcher are here at her funeral service. Lying here she is one of us, subject to the common destiny of all human beings.”

The bishop had cleverly annexed one of the sharpest phrases Margaret Thatcher used to describe a member of her praetorian guard of true believers—“One of Us”—in what was ostensibly a non-political address. In fact it was every bit as political as Mark Antony’s oration over the grave of Caesar in Shakespeare’s play.

The hostility of liberals toward Margaret Thatcher has focused on the notion that she was a self-centered, me-first personality. The slender evidence for this thesis is that she once said, “There is no such thing as society.” Putting these words back into the Christian context from which they have so often been wrenched, the bishop quoted from a sermon Mrs. Thatcher had preached at St. Lawrence Jewry before becoming prime minister. In it she referred to the Christian doctrine “that we are all members of one another, expressed in the concept of the Church on earth as the Body of Christ. From this we learn our interdependence and the great truth that we do not achieve happiness or salvation in isolation from each other but as members of society.”

The service continued with delightful references to Margaret Thatcher’s many private kindnesses, which she kept quiet or camouflaged under her forthright manner. Sometimes the two got mixed up. Sitting next to Richard Chartres at some official dinner, in the midst of explaining how F.A. Hayek’s The Road to Serfdom influenced her politically and theologically, the need to give him dietary advice entered her head. Grasping him by the wrist, she said very emphatically: “Don’t touch the duck pâté, Bishop—it’s very fattening.”

The mood at St. Paul’s was very much in keeping with that of a Christian burial service solemnized in accordance with the words of the 1662 Book of Common Prayer. There were few concessions to contemporary language or the political eulogy. Faith, hope, and the message of the Resurrection were the themes. Margaret Thatcher had been a devout Methodist in her youth. As an Oxford student she preached sermons long before she delivered her first speeches. She knew her King James Bible, Charles Wesley’s hymns, and Cardinal Newman’s prayers. All were in the order of service she had so carefully chosen.

Well before she entered politics, the young woman destined to be prime minister had the upbringing and character of a firm patriot. So she instinctively understood the historic touches of pomp and circumstance that make a national state funeral a supremely British art form.

The horse-drawn gun carriage moving in slow march through the medieval streets of the city of London; the sun glinting on the immaculate uniforms of the pallbearers; the muffled drums thudding the beat of mourning with military precision; the sonorous music of the Royal Marines band; and the celestial voices of the choristers making the welkin ring with the sentences that begin: “I am the resurrection and the life saith the Lord…” set to the 17th-century plain chant of William Croft. All in all, a panoply of spiritual and ceremonial beauties.

The Obama administration made a diplomatic mistake by not sending a single official U.S. representative to this unique occasion, although perhaps Margaret Thatcher would have been more pleased by the presence of old Washington friends such as Henry Kissinger, Dick Cheney, and Newt Gingrich.

In any case the outstanding American presence of the day was that of her 19-year-old, Dallas-born granddaughter, Amanda Thatcher, who, in firm tones surely inherited from the Iron Lady, read the famous verses from Ephesians: “For we wrestle not against flesh and blood but against principalities, against power, against the rulers of the darkness of this world, against spiritual wickedness in high places.”

Margaret Thatcher, often in partnership with Ronald Reagan, fought these good fights throughout her life. They were spiritual as well as political battles. Her beautiful funeral commemorated them, honored her, and winged her soul on its heavenly journey to God.