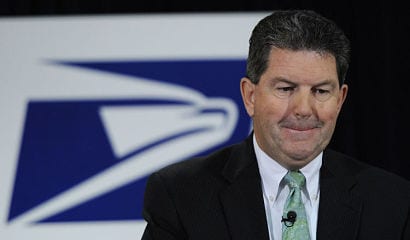 Second quarter results are in: The U.S. Postal service lost another $1.9 billion. At this rate, its loss for a full year could be $8 billion. Ever since its bread-and-butter business, First Class Mail, began a steady decline as e-mail and “social media” took the place of letters it has been a consistent money loser and stays alive only with annual loans from the federal government — loans that it cannot repay.

Since 2007, the USPS revenues have been unable to cover its budget. Although it no longer gets formal subsidies as it did before it became a quasi-independent body and not a cabinet department, it has reached the limit — $15 billion — of money it can borrow from the government. Last year it defaulted on $11.1 owed to its pension fund. By this September it predicts an added pension default of $5.6 billion.

Earlier this year, the Postal Service announced it would eliminate Saturday delivery of First Class mail (but not packages) come August. Whoa, said congressional critics. Some claimed the USPS could not legally do that without congressional approval. That was never tested in the courts, but Postmaster General Patrick Donahoe (above) could see the handwriting on the wall.

His staff that estimated that cutting Saturday delivery would save $2 billion a year. That would have been a long way from covering a likely annual loss of $8 billion.

Mr. Donahoe soldiers on. He says the solution is for Congress to pass his “updated” five-year plan. It reads a lot like the last one. For example, it includes cutting Saturday delivery, another possible postage rate increase and allows it to expand the range of products and services it sells. Selling more stuffed animals and knickknacks, however, will add only marginally to its revenue, as will another penny for every First Class stamp.

One practical item in the five-year plan that would have positive consequences would be a requirement that as of a date certain any new hires would have a different pension plan. The current “defined benefit” system requires the USPS to pay fixed sums to every retiree based on formulas negotiated with unions. The plan for new hires would be a variation on the 401K-like “defined contribution” system, wherein the employee designates a certain amount of his/her pay to go into an investment account (subject to guidelines) which will earn income and to which the USPS, if it had a surplus in any year, could add a percentage of it to the plan (as most private companies do).

These ideas alone will only partially alleviate the USPS’s annual agony. It will remain and Congress will have to keep upping its debt limit, ad infinitum.

The long-range solution would be to find a way to privatize the entire system. For now, a good start would have two elements. First, auction off to the highest bidder (viz. FedEx, UPS) the entire package delivery operation. The USPS is required by law to deliver a First Class letter to midtown Manhattan and Nome, Alaska, for the same price, regardless of cost. With packages, however, it may take time and distance into account in setting rates — just as FedEx and UPS do.

The auction of this service will bring in a lump of cash that can be used to reduce the current year’s loss and/or make good on some of the pension defaults.

At that point Congress will need to do what it often avoids — face reality. Left with First-Class mail, Second Class (periodicals), and direct mail pitches (Third Class), it will almost certainly continue to lose money, even if less than before. Congress must therefore step in and vote for an annual subsidy to make sure the service meets its budget. Along with that, Congress should vote itself oversight over the service’s budget and adjust it according to changing conditions, but always with a fixed limit to the year’s subsidy.