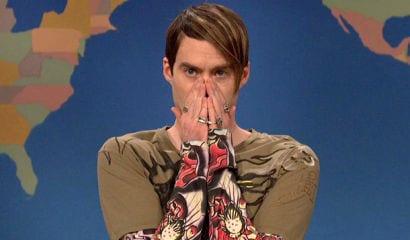 Broadcast networks featured more homosexual characters during the 2012-2013 season than ever before. The Big Four networks lost 7.5 percent of their viewership, with a more profound exodus occurring among the 18-49 demographic coveted by Madison Avenue. Do mainstream viewers not care for so many gay men in their living rooms?

The axed shows include Partners, about gay-straight architectural partners and their romantic partners, one of whom is a homosexual vegan; Smash, a Glee ripoff set on the only place gayer than primetime, Broadway; and The New Normal, which follows a woman who becomes a surrogate mother for a well-adjusted gay couple after her husband cheats on her. Ellen Barkin, who plays the stalwart Republican grandmother of the surrogate baby, issues frequent racist and anti-gay comments.

No one likes a scold, a term encompassing people who intrude on others’ bedrooms and people whose bedrooms intrude on others. If one type of scold most vehemently objects to the flood of gay programming, another type of scold most aggressively pushes it. This Hollywood sensibility that television shapes mores, coming from people whose mores prevent them from stepping into a house of worship, makes television as boring as the most long-winded Sunday-morning sermon.

If reorienting opinion is not the intent of gay programs, that certainly has been the result, notes a poll by the Hollywood Reporter. Television depictions of homosexuality make viewers more welcoming of it, the survey found. “The data would suggest that seeing this stuff makes it more socially acceptable,” pollster Jon Penn explained last fall. “Views on gay marriage have exponentially gone in its favor since 2002.” This may be because the depictions of homosexuals on network television more closely resemble advertising than entertainment. And commercials, of course, induce some viewers to buy a product but most to turn the station.

Ironically, the gay character on network television that most Americans don’t want to say goodbye to is the one departing gay character that strident gay activists want off the air. Stefon, Saturday Night Live’s bizarre, sleep-deprived club kid, has exploited the alien and absurd for laughs for the last five years. Asked by “Weekend Update” host Seth Meyers to recommend spots for families to visit in New York City, Stefon invariably offers someplace quite inappropriate — like club Ounce, “located in the middle of the East River, this place has everything: cholos, puke people, a sheep dog that looks like Bruce Vilanch, an entire room of puppets doing karate.” Other segments witness Stefon recommending avant-garde underground sex clubs featuring “screaming babies in Mozart wigs,” “skitzos,” “a wise turtle that looks like Quincy Jones,” and “Blingo — black Ringo.”

More caricature than character, Stefon — and his writers, the actor playing him, and everybody watching — is in on the joke. It’s not a mean-spirited attack on gay men but acknowledgement that what people sometimes term an “alternative lifestyle” can get really alternative on the extremes. Stefon is about as real as the saintly homosexuals in primetime propaganda. The difference is that everybody knows Stefon is absurd; the producers of The New Normal expect their audience to buy into their absurdities.

A character becomes less interesting when writers don’t attempt to characterize an entire group of people through an onscreen persona, like Ellen Barkin’s demonization of Republicans. The character then ceases being an individual and becomes a symbol, a wooden embodiment of an idea. No person neatly sums up an ideology, and that’s the problem with many of primetime TV’s gay characters. They’re largely on television to influence, not to entertain.

Network television’s fall-season comeback should include gay characters but not Potemkin gays inserted to propagandize. It’s not that viewers are anti-gay. They’re anti-boring, so there’s no reason why dynamic gay characters that don’t embody political clichés wouldn’t interest. There’s also no reason why we need to know about the sexual interests of every character. Ambiguity, as demonstrated from Scooby Doo’s Thelma to Mr. Belvedere, captivates, too. Writers wishing to spark the imagination would be wise to leave something to the imagination, a concept that Stefon — what on earth is a “cholo”? — fully grasps.

Primetime television emanates from a tiny corner of America that broadcasts as though on closed-circuit for that culturally monolithic enclave. Their shows don’t reflect America. They reject America. It’s no wonder that America increasingly reciprocates.