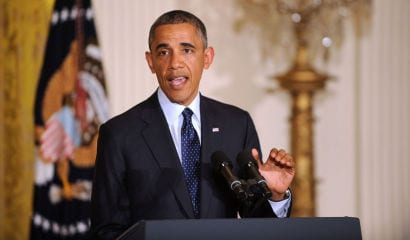 Writing a column on the recent IRS abuses is a hazardous undertaking. The scandal is expanding so quickly that it’s hard to get a paragraph on paper without having to revise it with new, shocking details. As I write this, an unctuous-looking former IRS commissioner by the name of Douglas Shulman is telling the Senate Finance Committee that he knows nothing, to the consternation of Senator Max Baucus. A Democratic senator angry at a Bush-appointed bureaucrat over the targeting of Tea Party groups—strange times on Capitol Hill.

But even in post-scandal Washington, some things always stay the same. One of them is the inclination of many progressives to defend the president at all costs, no matter what the accusation. Some of these arguments—with their logical contortions and obstinate immunity to new facts—have been downright impressive. Media Matters, head to the job fair. America has a hack surplus.

Let’s take a look at six of these rationalizations that have been circulating on the left.

These right-wingers are just upset that the IRS is doing its job.

“As the [inspector general] report details, from 2010 onwards, there was a significant rise in the number of applications for tax-exempt status. … Given the rise of the Tea Party, it is probably safe to assume that many of these new groups had emerged from the populist right.” – John Cassidy, The New Yorker

As Rep. Todd Young pointed out, and The Atlantic later verified, there was no surge of tax-exempt applications in 2010. In fact there were fewer such applications for 501(c)(3)s and 501(c)(4)s in 2010 than in 2009. The real tidal wave of applications didn’t come until 2012, the year of the presidential election and also the year that the IRS allegedly stopped discriminating against the Tea Party.

And this went much farther than just singling out Tea Party applications for scrutiny. As USA Today reported, starting in 2010, the IRS didn’t approve a single Tea Party group for 27 months, while pushing through dozens of applications for progressive groups. The myth of a wave of Tea Party applications is also undermined by the fact that it wasn’t just Tea Party groups that were targeted. Pro-life, evangelical, anti-voter fraud, and even Jewish groups were all singled out for scrutiny. This was a concerted attack on conservatives, not an attempt to deal with paperwork.

These right-wingers are just rehashing Whitewater.

“The ‘scandals’ confronting President Obama are derived almost entirely from the political and media mindset that gave us Whitewater. That is to say: they are minor instances of bureaucratic incompetence and/or executive overreach that are seized upon by hysterical right-wing media and politicians, and eventually aggrandized by their craven mainstream brethren, into red-alert-Chryon, full-scale Media Narratives.” – Steve Almond, Salon.com

But the notion that the IRS scandal is somehow an analog to Whitewater, or that this is all a “minor instance of bureaucratic incompetence,” is nonsense of the first order. As National Review revealed yesterday, these abuses weren’t even limited to the IRS. One Texas woman, trying to set up two Tea Party-oriented nonprofits, was investigated by the FBI, audited by the ATF, and fined $17,500 by OSHA for violations like having the wrong type of seat belt on a forklift in a machine shop.

A pattern has also emerged in which government agents harassed moneyed Mitt Romney supporters in 2012. One such donor, Frank Vandersloot, caught an opposition researcher digging through his divorce records. Shortly thereafter, he was notified of his first-ever audit by the IRS. Two weeks later, the Department of Labor sent him an audit letter.

It’s a bit early to judge the IRS scandal against Watergate. But I think the verdict is in on Whitewater. Based on what we do know, we’re talking about multiple agencies of the federal government engaged in a concerted effort to harass and intimidate the president’s political opponents. That’s a bit more serious than a few fishy real estate investments made by Bill Clinton.

These right-wingers are working against public opinion.

“The simple fact is that although the Republican sharks are circling, at least so far, there isn’t a trace of blood in the water. A new CNN/ORC survey of 923 Americans this past Friday and Saturday, May 17-18, pegged Obama’s job-approval rating at 53 percent, up a statistically insignificant 2 points since their last poll, April 5-7, which was taken before the Benghazi, IRS, and AP-wiretap stories came to dominate the news and congressional hearing rooms.” – Charlie Cook, National Journal

Welcome to Washington, where you’re not allowed to feed your goldfish without checking an opinion poll. In addition to being a shameless appeal to the majority, there’s also an odd, Rousseauian flavor to this argument. Should laws only be enforced when the public approves? And if we’re being governed solely by the general will, does this mean we can finally repeal unpopular Obamacare?

These right-wingers are trying to blame the president for the IRS’s actions.

“After all, if Obama knew about the imminent report a little earlier, that wouldn’t mean he was interfering with it. The IG report doesn’t even say Obama or anyone in the White House was involved in IRS misbehavior. And there’s no evidence so far that the White House knew about the investigation during the election season.” – Greg Sargent, Washington Post

It’s true that the president hasn’t been directly connected to the IRS abuses. But the IRS is an executive agency—more independent than others, certainly, but still under the president’s responsibility. Even if Obama wasn’t aware of the Tea Party audits, they happened on his watch.

So, yes, conservatives who suspect the president’s involvement are engaging in conjecture. But it’s conjecture built on solid ground. These abuses went on for years and stretched across multiple agencies. It’s not the Cincinnati IRS office that sets policy for the whole of the federal bureaucracy; it’s the White House, which right now looks like it’s playing CYA.

These right-wingers are engaged in a witch hunt.

“Why am I alarmed? Because two ‘scandals’ — the IRS tax-exempt inquiries and the Department of Justice’s tapping of reporters’ phones — have become lynch parties. … Let’s demand an end to partisan sideshows or media witch hunts.” – Donna Brazile, CNN.com

Every time President Obama is suspected of wrongdoing, conservatives are portrayed as the striking miners in Emile Zola’s Germinal: a single-minded blob chanting and rioting its way through the streets, looking for malefactors to destroy. It’s a ridiculous portrayal, but if it were true, the IRS scandal would invite the question: What do you call a witch hunt if there actually is a witch on the loose?

These right-wingers are trying to destroy civil society.

“What’s most disturbing, though, is that the paranoia and anger of the Tea Party base, as echoed by an intimidated, primary-averse GOP leadership, are taken seriously by Beltway journalists, who then lose their own ability to distinguish fact from right-wing fantasy. I keep thinking scandal fever has broken, but it’s not over yet.” – Joan Walsh, Salon.com

This objection, risible and partisan though it may seem, probably reveals the most about what’s driving the left. Over the past three years, progressives have created a morality tale in which they’re defending the body politic against ravaging hordes of Tea Party sans culottes. Even with the Tea Party under attack by the IRS, they can’t break away from that comfortable dichotomy. Far better that this whole scandal just go away. Then the world will make sense again.

And it turns out the dangers of writing about the IRS scandal have caught up with me. As I type this, Lois Lerner, former head of the IRS’s tax-exempt division, is reported to be pleading the Fifth. Progressives can spin all they want, but the news is breaking too quickly. This isn’t going away any time soon.