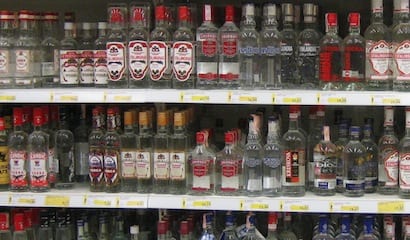 If ever a class of people needs the state’s protection, drunks do. More so than children or geriatrics, inebriates just can’t help themselves. Preyed upon by highwaymen and fat girls, as well as their own unquenchable thirst, alcoholics can’t be expected to discern Old Crow from Maker’s Mark. Yet, they do. The miraculous power of God Booze infuses its worshippers with a sixth sense, enabling them to detect Ron Rico from Ron Bacardi. In fact, customer complaints served as a catalyst for New Jersey’s raids. Though they may not be able to recite the alphabet or balance on command, drunks know drinks.

The barfly understands when the barkeep cheats him. He doesn’t always grasp when he cheats himself. This is especially true when it comes to America’s most popular spirit, vodka, which accounts for about a third of all liquor purchased. Once an obscure sometime-substitute for gin, vodka consumption in the U.S. now outpaces gin, rum, and tequila combined. Unlike its colored cousins bourbon and tequila, the clear 80-proof elixir mixes well with others, a secret to the popularity of potions as well as people. Over the last decade, vodka sales have almost doubled. Fueling the boom have been expensive vodkas in flashy bottles sold in flashier advertisements by the likes of Chelsea Handler and Puff Daddy.

There is less for the drinker to be discriminating when it comes to vodka. Strangely, this is the liquor in which brand name matters most. When vodka-lovers sampled offerings from ABC’s 20/20 a few years back, the group overwhelmingly rejected Grey Goose, a posh premium with a distinctive frosted-glass bottle. The New York Times similarly blind taste-tested 21 vodkas. Grey Goose and Ketel One failed to finish in the top 10. The winner? Smirnoff. The lowest priced vodka placed highest.

Oft described as “colorless, odorless, and tasteless,” vodka doesn’t vary the way other hard liquors do. Syrupy cheap rum goes down sweet. It doesn’t come up sweet. Bad tequila tastes as though Jose Cuervo and all of his cousins have just bathed in the back of your throat. But vodka has to be really, really bad for a drinker to notice. Vodka is vodka is vodka.

So, if the Jersey bartenders substituted Sobieski for Belvedere, whose ornate empty bottles compare in price to its fellow Polish competitor’s full ones, who, really, has been harmed? The customer maintains the illusion of social superiority all the while drinking equal if not better vodka. The barkeep enjoys higher profits and a good laugh. And nobody was the wiser for it—until New Jersey unleashed a meddling device known as the “True Spirit Authenticator.”

The misnamed “Operation Swill” didn’t discover shady barkeeps substituting an inferior for a superior product, at least when it came to vodka. The discovery of a liquor bottle containing rubbing alcohol is quite another matter.