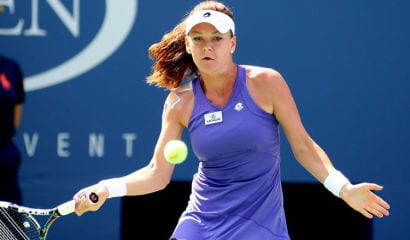 PARIS — Gael Monfils stole the show on Monday, coming into the tournament as a wild card and beating the No. 5 seed Tomas Berdych in five electrifying sets. He did it again on Wednesday, snatching victory from defeat after very nearly doing just the opposite in his four-set nail-biter against the Latvian phenom Ernest Gulbis. He is now the talk of the town and the face of the tournament.

Fans are entitled to their pleasures, especially French fans who have been starved of a winner at their own world-renown championship since the triumph of Yannick Noah here at Roland-Garros 30 years ago. But the tournament is just beginning and there is time yet to assess the hopes and the endurance of these fantastically gifted young men with the long legs and strong arms and quick eyes. There are only a few young men of such gifts. In a universe of thousands and tens of thousands and even hundreds of thousands of tennis players, these are the ones who are selected to come to the Internationaux de France (French Open for short). The competition has taken place on these grounds adjacent to the Bois de Boulogne in the west of Paris since 1928, interrupted by the disaster of defeat at the hands of foreign invaders and renewed in the wake of liberation. The 128 at the starting line are the best among the best, as well as can be determined by an imperfect selection process.

Monfils, a 26-year old loose cannon who has been alternately the pride and joy and the despair of French tennis, is on a roll. America’s James Blake called him the most gifted athlete he ever met, but injuries hampered his career and, at 26, he has yet to reach a final at a grand slam event. He remains a perennial what-may-yet-be.

In the first two rounds here he was perfectly in character, making impossible shots such as a desperate catch at the net yesterday that — among several other fantastic plays in the last two games and the ensuing tiebreaker — earned him the third set against Ernest Gulbis, another gifted but unpredictable player. This took the wind, or the will, out of the Latvian phenom in what had until then been a point-for-point contest, and Monfils cruised through the fourth for the win.

The wild drama and nailbiting was not a feature of the ladies’ side of the draw, marked by an easy second round win by the top player, America’s Serena Williams, over a promising French teen, Caroline Garcia. There was, however, a ballet in the form of overlapping matches played by the most touching and beautiful sibling act in the sport. In the first scene, Agnieszka Radwanska demolished, but with grace and gentleness, Mallory Burdette. In the second scene, her younger sister Urszula fell like a distraught maiden before the clearly superior game of Dinah Pfizenmaier.

Agnieszka and Urszula have emerged more quietly than the previous sister sensation of Venus and Serena Williams, and there is no sign yet that the gradual ascendency of the younger over the older will be the pattern here as it was there. Agnieszka plays just below the top level represented by such players as Serena Williams and her Florida neighbor Maria Sharapova, the defending French Open champ, and Vika Azarenka of Belarus (also the homeland of Olga Govortsova, mistakenly described as Bulgarian in an earlier dispatch), and Samantha Stosur of Australia, and Marion Bartoli of France, all of whom are, thus far, advancing in the tournament in keeping with the expectations suggested by their rankings.

Agnieszka possesses such grace on the court, however, that it pinches the heart. Small and beautiful, she moves like a ballerina, never expends more energy than needed — at least not visibly –, plays, in short, old-fashioned ladies’ tennis. She played yesterday on a discreet little auxiliary court against Mallory Burdette, and refused to be drawn into the American girl’s power plays, preferring the lithe movements of a sly cat. Miss Burdette, who left Stanford University to make some money on the tour in order to return to Stanford and, according to reports, pursue medical studies, had a nice run at the U.S. Open last year in her maiden grand slam event, winning two rounds before losing to Miss Sharapova, but on that almost completely unwatched court yesterday she was distraught and disoriented by her opponent’s deft and gracious game

It was different a little later in the morning, also on a tucked-away court far from the madding crowds, when Dinah Pfizenmaier overwhelmed Urszula Radwanska, in a match that combined long hard baseline shots with excellent tactics at the net and in the volley. What was striking, however, was the unmistakably feminine ebb and flow of the match. Miss Pfizenmaier, though she is a little younger and smaller than the Radwanska sisters, who are themselves quite slight, does not have their delicate appearance, but she has a girlish look. She is very pretty, and she has the movements of a natural athlete — a tomboy one is tempted to say — rather than, like them, a ballerina. Agnieszka plays tennis like a Chopin piece, Urszula is something of a Schubert, and one would have to say Dinah is more of a Beethoven, the strength punctuated by moments of exquisite lightness when she pulls off a drop shot (which Agnieszka also does with a marvelous touch, as here, unforgettably) and follows through with a bullet down the line.

It is such a relief to see real ladies’ tennis. It is fine to see young ladies play what they call the power game, the way for example most of our girls, inspired by the gifted Williams sisters, play the game today. It is serving them well. But it is a relief to see them too in an older fashioned kind of play. Huge powerful young men like America’s John Isner or France’s Benoit Paire and Jo Tsonga do what is required of them to win. So does Jerzy Janowicz, who is from Lodz and who is almost the same age as Agnieszka (who is from Krakow) and twice her size.

The British speak of gentlemen and ladies in the tournaments, as do the French, messieurs and dames, not men and women as we do. We are Americans and our language has its own quirks and usages. But differences matter and the language should not mask them. The French have gone a long way toward blurring the genders, with a ghastly confusion in official documents and media usage of the traditional masculine and feminine forms of nouns. Roland-Garros’s red clay, whose texture favors a wide variety of shots, puts into evidence the natural difference between a male wrist and a female one, a man’s shoulder and a woman’s.

Like the charming identical outfits worn by Agnieszka and Urszula, their style of play may be noticed and wished for by the little girls — it was a kids’ day at Roland-Garros — who took some time away from their text messages to watch them.