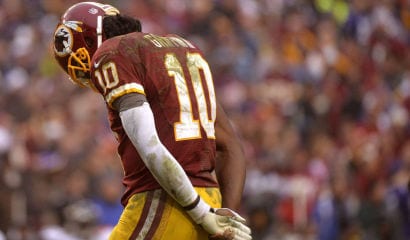 “Congress Wants Redskins Name Change” reads the ESPN headline. The fine print explains that seven congressmen, not exactly a quorum, and three delegates — including the District of Columbia’s — without a real vote, petitioned the Washington Redskins to change their name.

The politicians opined in a letter that the name violates the National Football League’s commitment to diversity — surely professional football appears more of an equal opportunity employer than the letter signers do. They point to legislation introduced that may interfere with the football team’s ability to retain certain trademarks. “Redskins,” they say, is “derogatory, demeaning, and offensive” to Native Americans.

A D.C. city councilman has similarly called for a name change. The city’s mayor said that the team, which plays its home games in nearby Landover, Maryland, would have to reconsider its name if it ever wanted to move back into the city, remarks from which he later backtracked.

Four in five Americans support the “Redskins” moniker. And team owner Daniel Snyder promises to never, ever change it. The controversial city that prefaces the controversial nickname is another matter. At some point Snyder might find sharing a geographic designation with so many political rogues “derogatory, demeaning, and offensive” to the Redskins name and choose a more respectable prefix for “Redskins.”

The history of the “Redskins” nickname appears less about Native Americans and more about the economic realities of the early NFL. The $9 billion behemoth was once the latest in a long line of failed attempts at professional football. As I discovered in researching my forthcoming book, The War on Football: Saving America’s Game, NFL owners — then a motley collection of gamblers and the nouveau-not-so-riche — attempted to market their product as an offseason diversion for fans of the national pastime once that game’s season had gone past its time. So, the team that shared Wrigley Field with the Cubs became the Bears, the team that shared the Polo Grounds with the Giants became the Giants, and the team that eventually shared Tigers Stadium with the Tigers became the Lions after their move to Detroit.

The Redskins started life as the Boston Braves, sharing Braves Field with the Major League Baseball team of that name. After their first year, the football Braves moved about a mile east to Fenway Park. Seeking a name to go with the baseball team with whom they shared a field, the Braves ownership changed their name to the “Redskins.” Get it: Red Sox, Redskins. Even when they moved south and occupied Griffith Stadium along with the Senators, the Redskins remained the Redskins.

Local Indians don’t seem as concerned as local politicians about what fans call the squad. Patowomeck tribe chief Robert Green told the Richmond Times Dispatch, “About 98 percent of my tribe is Redskins fans, and it doesn’t offend them, either.” Pamunkey chief Kevin Brown admitted, “I like the uniforms. I like the symbol.” Rappahannock tribal chief G. Anne Richardson held back laughter at the controversy. “There are so many more issues that are important for the tribe than to waste time on what a team is called,” she told the newspaper. “We’re worried about real things, and I don’t consider that a real thing.”

Be grateful that professional meddlers preoccupy themselves with professional football. It could be worse. They could be in your tax returns or in your emails instead of in a debate that they won’t win. Football, for them as for the rest of us, is a pleasant diversion.