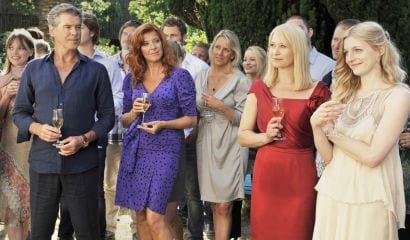 Susanne Bier’s Love is All You Need is a disappointment. This is not because the title (the Danish title translates as The Bald Hairdresser, but that was thought a turn-off for the American market) promises the Beatles and delivers Dean Martin. On the whole, I’d rather have Dean Martin — even in That’s Amore, which runs like a leitmotif throughout the movie — than the Beatles at their left-wing soppiest anyway. No, what I found disappointing was that the brilliant director of the searing dramas Open Hearts and In a Better World contented herself with this bit of fluff when she came to direct a romantic comedy. Half in English and half in subtitled Danish, the movie is not bad or contemptible and it’s even quite enjoyable at times — as how could it not be from such a source? But one knows from her past form that Ms. Bier could have done so much better.

The main problem is that she makes the work too easy for herself. In bringing together her two damaged characters — rich widower Philip (Pierce Brosnan) and cancer-suffering hairdresser Ida (Trine Dyrholm) — under a pizza-pie moon above the Bay of Naples, she surrounds them with such dreadful people that the basis of their attraction seems less likely to be love than desperation to find the only other decent person around. Having met cute with a fender-bender at the Copenhagen airport, they proceed to Philip’s long-neglected lemon plantation in Sorrento for the wedding of his son, Patrick (Sebastian Jessen), and her daughter, Astrid (Molly Blixt Egelind). A subplot about Patrick’s “doubts” about the relationship — doubts of a highly recognizable and rather tiresome kind in today’s movie culture — is an annoying distraction.

We learn in the first part of the film that, prior to meeting Philip, Ida has returned home from the last of her chemotherapy treatments to find her pig of a husband, Leif (Kim Bodnia), cavorting in their living room with a popsy named Thilde (Christiane Schaumburg-Müller) — a woman whom it is impossible to believe is either, as advertised, “from accounts” or attracted to scruffy, overweight 50-something Leif. I wondered if there was a hint of a macaronic pun in his name: Leif’s a bitch, and then you die. Certainly, Ida worries throughout the film that she is going to die from a return of the cancer that has already taken one breast. Yet she manages to keep a lid not only on that anxiety but also on her sense of betrayal by Leif — even when he shows up at the wedding with Thilde, whom he now refers to as his fiancée.

In fact, she appears almost saint-like when she tells a furious Astrid that she should be more understanding towards her father because her, Ida’s, illness has been hard on him, and she goes on to remonstrate with her for calling Thilde a slut. “The word ‘slut’ was invented for this,” Astrid replies. Meanwhile, Philip, who for years has been treasuring up bitterness over his wife’s death in a senseless accident — with, apparently seriously ill-effects on Patrick — is being desperately pursued by the dead wife’s divorced sister, Benedikte (Paprika Steen), a ghastly woman with a sullen and bulimic teenager in tow who delivers perhaps the most cringe-worthy wedding speech ever under the mistaken impression that Philip returns her affections. No prizes for guessing that the still very attractive Ida, wearing a blonde wig to hide her baldness, will thaw the frozen well-springs of Philip’s emotions and in the process, Cinderella-like, take a big step up the social and economic ladder while regaining some of the self-esteem that fate’s blows have knocked out of her.

The best line in the movie comes just before Philip finally breaks through the façade of politeness and family solidarity to tell Benedikte what he really thinks of her. “You should be ashamed of yourself,” he begins.

Delighted, she replies, “I know!”

It’s a reminder of a cultural inversion which lies in the background of this movie and by which things once regarded as shameful have become instead things to be perversely proud of. Philip tries to re-assert some sense of the old-fashioned claims of decorum and propriety against Benedikte only to be regarded by her as complimenting her shamelessness — as if it were inconceivable that he could have intended the words otherwise than as an ironic tribute to her own delicious naughtiness. She can’t understand that it is her inability to distinguish between love and lust that makes her unlovable. But this flash of insight comes and goes in an instant, and the movie turns back instead to a plodding and culturally safe endorsement, as it appears, of the emotional Astrid’s contention that “You can’t lie yourself through life because it’s easier; that’s how you end up fat, old, and unhappy.”

In the circumstances, we may accept that she can hardly say anything else, but we also must know that you can lie yourself through life — as, pretty clearly, Benedikte and Philip have done up until now and as even Ida does with the wig. It’s not the “lying” — if you insist on applying that word to the putting on of a false front to the world — but the spirit in which it is done that counts. One may also “lie” out of love, courage, or duty. And if one doesn’t lie, one is quite likely to end up fat, old, and unhappy anyway. Maybe more likely. The sad fact is that there is no simple rule leading us to happiness and fulfillment, any more than there is necessarily a fated encounter with love and beauty for the good and the deserving. But a better movie than Love is All You Need, like the great romantic comedies of yesteryear, might have made us believe for a moment that both things are true.