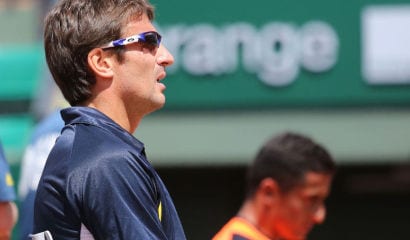 They say the clay tennis court surfaces are where the Spaniards are without peers. They are right. They are right, at any rate, if you judge by the results of the first week of the French Open, officially the Internationaux de France, played every year at the Roland-Garros location on the border of the Bois de Boulogne’s green acres on the west side of Paris. When you watch Spanish tennis men competing against each other on these courts you cannot help parodying still another line from our literary classics, “The Spaniards play a game different from yours and mine.”

The fourth round match between Nicolas Almagro and Tommy Robredo was a case in point.

You cannot put aside the drama of the match and its intensity. Robredo was two sets down against his younger, higher-ranked, seemingly stronger compatriot. He won the next three sets with a display of grit and tactical intelligence that would have been breath-taking in itself, but was astounding when you knew that he did the same thing against the French star Gael Monfils in the previous round, and the same thing against Igor Sijsling (who is from Holland) in the round before that.

Each time, Robredo, who is 31 and was out for most of the past three years with leg injuries that required surgery, not only fought back from the deepest holes possible, but did it with finesse and power that had his opponents gasping. Where in the world is that shot coming from is what you read on their faces time and again, or, how can he pass me again? Where is he finding these reserves of energy? He keeps moving, his arms stay perfectly steady, he seems to see everything I am doing before I do it, and he makes his shots bounce and twist at will on the red clay.

Roger Federer lost two sets too in his match yesterday, but that was after winning the first one; he needed only one to restore balance, and one more to set things the way they are supposed to be between him and Gilles Simon. Simon is a fine player, better than most players here, but he does not have the record of Federer. Federer is a past winner at the French Open and he always gets to the quarters in the grand slam tournaments. Simon is a consistent third or fourth round man. That is the difference. Once they were even at two sets each, the pressure was all on the Frenchman, and Federer could raise it or lower it at will with his stunning repertory of shots and his incomparable footwork.

Robredo, by contrast, was down two, after two exhausting rounds. Each time he had to win two to breathe a little more calmly, and then still fight off any possible late surges in the last movement of the symphony, if you want to think of a five-set tennis match in terms of classical music. Monfils, to be sure, seemed to collapse the other day, ran out of gas, grew timid and repeatedly missed opportunities to re-take the initiative. It is not fair to Robredo to suggest Monfils lost it more than Robredo won it, but it is true that Monfils seemed to most observers to lose his will to win.

But it is also true that will or no will, he was simply not as strong, his game not as fine. That certainly was what happened with Almagro. Almagro did not suffer any evident collapse of will or guts. On the contrary he fought as hard as ever in the fifth, repeatedly trying for the combination of deep baseline shots and low sliders just a hair over the net that served him early in the match: keep your man behind the baseline and wait for him to push back a hard one that gives you the chance to charge into it and put it away, or make it ride low into the clay and make him swank it out.

He tried these. Robredo had the answers, turned the pressure around, made him hit too late, flat, which sends the balls out of bound or, on the low balls, into the net instead of just over it. Almagro, a powerful player with beautiful form, just could not regain control of the match. He shook his head in dismay as Robredo caromed shots into one corner and then the other, running him ragged, or passed him with perfect sizzlers when he tried to break up the rally by rushing the net.

Beyond the drama, there was the sheer beauty of both men’s games. They are completely at ease on clay; they can tell the time it will take the shot to reach them the moment they hear the sound of the other fellow’s racket on the ball. It is a matter of finding the opportunity, or rather creating it, to give yourself the opportunity you need. In other words you need to force him to give you the shot you need to get the next one past him or force him to hit it poorly. After three hours Robredo was the one who could do this more, and at the end of four hours it was over. The tandem remained stunning to the end.

This is what you really want to see on clay, but necessarily it is not what you usually see because most of the time you do not have clay specialists on both sides of the court. Tommy Haas beat John Isner, as previously he beat Jack Sock (and as Isner beat Ryan Harrison), by blocking their power shots until he had the space to put across one of his own. These were fabulous matches, and the one between Haas and Isner was a roller coaster because of the way Isner came back from a two set hole and, after saving a dozen match points, very nearly pulling off an upset. These were hard court games played on clay, in which you looked for a way to finish the point as fast as possible.

The American men are now all out of the tournament, unless you count Tommy Haas who lives in Florida and has American citizenship. He is like all of us, an immigrant. But he speaks to the press in German and the numerous German fans think of him as one of their own and he reciprocates by letting the tournament identify him as German. He knows Arnold Schwarzenegger, a motorcycle enthusiast and until lately a high public official in California, a Republican oriented more toward the center than the right wing of the party. This has no known effect on Haas’s game, which is of very high quality. We lost count of the number of double faults he committed in the game against Isner — who by contrast was able to stay in the match largely thanks to his consistent aces — but he made up for them.

Tommy Robredo meets another compatriot and clay court specialist as the tournament moves into the quarterfinals, the mighty David Ferrer, whose competiveness and resilience are legendary. Another five-set drama, who can tell, but it will anyway be a great match.