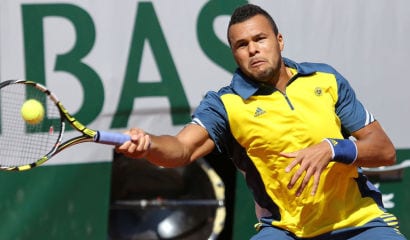 PARIS — Roger Federer was in top form, and as he walked on to the central court at Roland-Garros under a glorious June sky, he had a clear shot at his second French Open title, since no matter what happened in the other half the draw, he would logically be the more rested of the two finalists. The Frenchman Jo-Wilfried Tsonga in Tuesday’s quarter-final match, a Spaniard not named Rafa Nadal in Thursday’s semi-final, he had his work cut out for him. But Federer always does, for he always has a great deal of respect for his opponents.

And even more than a great deal. What he said after three quick sets (7-5, 6-3, 6-3) and a quick exit as the afternoon waned — they started late because one of the ladies’ quarter-finals, between Serena Williams and Svetlana Kuznetsova, took longer than expected — was that Tsonga was better all around, played better, deserved all the credit. He did allow as how he was sorry he played poorly, but he did not dwell on this.

Observers did, during the match. It was quite clear Federer was playing listlessly. Tired, bored? That is blasphemy. He will speak for himself sooner or later, or he will show what is true, on another court. But he certainly was not the Federer, at once passionate and methodical, making seemingly impossible shots with no apparent effort, of the early rounds and of so many rounds on other grounds.

It could also just be an off day. Such days are not supposed to happen, but of course they do, and Federer, who won his 900th tournament match a few days ago, knows this as well as anyone.

The French tennis public knows about off days, about dimmed expectations, as does the American tennis public or the Chicago Cubs baseball public. You grit your teeth and shake your head, mutter about more training. It has been 30 years since a young French ace named Yannick Noah won the Coupe des Mousquetaires, the Roland-Garros trophy. They have been talking about him all week, reliving his great run of 1983. He has been talking as well, making himself unattractive sometimes by saying unnecessary, mean things about the men against whom he played half a lifetime ago. Why he feels this way is not clear. In one interview he suggested he still is sore because of the way the Federation treated him way back then. They made him, a member of the national team, play when he did not feel like it, reportedly.

Top level athletes can have difficult personalities. Mats Wilander, an astute commentator on the game and himself a three-time champion at Roland-Garros, before as well as after the final he lost against Noah, thinks that you have to be slightly unhinged to be a top champion. You have to have a “dark side,” he told the French sports daily L’Equipe, a desire to destroy your adversary. This must be what we call the killer instinct. He added that in today’s politically correct climate — he used the term — it is difficult for young athletes to develop such a side, because it is not considered nice, or fair to others. In deploring this, he implicitly suggests Noah’s lousy personality is of little consequence to what makes him a superior person in his own field.

In any event, as the home stretch gets into high gear at this French Open, you are confirmed once again in the notion that the only thing you know in tennis is that you never know anything. Sara Errani beating Agnieszka Radwanska? It takes nothing away from last year’s ladies’ finalist at Roland Garros to say, with all due respect, that Agnieszka played a beautiful match but somehow contrived to throw away big points, notably in her last service game and in the ensuing tiebreaker. And who would have thought there are holes after all in the solid Swiss bloc represented by Roger Federer and Stanislas Wawrinka?

Wilander, again, made an interesting comment in this regard, noting (well before the quarter-final match with Tsonga) that it sometimes seems as if there is more than one Roger Federer, one (I am paraphrasing) who plays like an angel and one who is nervous and irascible and prone to self-inflicted wounds.

In Tuesday’s match, this went well beyond the cracking on big points that spoiled Agnieszka’s day. Federer made stunning errors, such as netting easy smashes and hitting double faults on a game’s last point.

Stan Wawrinka may yet give Nadal a good fight when they meet on Wednesday. One can hope so, or it will seem as if the Swiss are not fighters. Federer made some spectacular shots against Tsonga, but it is simply inconceivable that Federer could play a tennis match without making spectacular shots. The enigma is that he made them without purpose. His whole match was without purpose. He played without aim. He played without hunger. He hit the ball back and sometimes it was a fine shot and other times it went long or was stopped by the net.

Jo Tsonga played with purpose, dedication, concentration, skill. His passing shots were beauties, his rallies effective, solid, serious. Ranked No. 8 worldwide, sixth seed in the tournament, he played like a man who has made up his mind to get to the very top. He played like a mousquetaire, a musketeer, the term given to French tennis champs who are expected by their adoring press and fans — and why should they not have adoring press and fans? — to return French tennis to the glory days of yore, when it was, in fact, the domain of the famous Four Musketeers, les quatres Mousquetaires, who won and won and won, just as their favorite lady, the legendary Suzanne Lenglen, was winning and winning.

If Tsonga felt lonely, being the only of the latter-day musketeers to be near to achieving what the forefathers won over and over for six or seven years at every tournament they entered, he certainly did not show it. Wilander again: the “musketeer concept” as developed in French tennis education has a very positive side, it teaches teamwork and group loyalty, peer support, but it has severe limitations as well, because to be a champion you have to feel different. After all, your aim is to turn out different, to be the best, and there can only be one best. Perhaps Tsonga is finding a confidence to break out from the group that is still lacking in his friends.

He played with ferocious concentration, but as always he was courteous and good humored, a gentle giant Mr. Pleszczynski calls him, particularly after the match when he was all smiles and almost corny with his “aw shucks, I’m really hoping to win it all this time, it’s my turn!” manner. Tsonga said one time: Every picture the sky paints is a moment of life, a moment of your life, you must look at the sky and see your life.… This is a loose translation, it does not do justice to the man’s lyricism and charm. Could he be finally the d’Artagnan the French have been waiting for? Maybe we shall know soon.