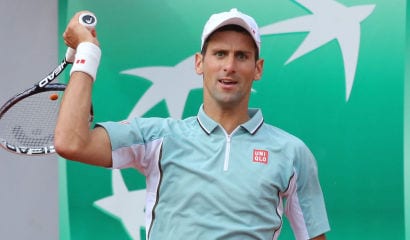 PARIS — When you have four big four in a tennis tournament, there is a better than even chance that one of them will win, and there is at least an even chance another one of them will be runner-up, finalist as they say in this sport. But this year at the Internationaux de France, which is the official name of the French Open, there were only three big four at the starting gate and when the semifinals are done on Friday, there will only be one, playing in a big four expanded to include a big five or even a big eight.

This is neither arbitrary sports classification jargon nor Lewis Carroll type nonsense talk, but sober reporting on what happens when the official Association of Tennis Professionals rankings are upset by injury and competition. With regard to the latter, the ATP is delighted — it is always more exciting when the competition is opened up by relative outsiders like Tommy Haas, in the eyes of many fans the hero of this tournament no matter what happens over the weekend because of the grit and brilliance this 35-year old Austro-German-American from Florida showed all the way to the game in his third set against Novak Djokovic. The number one ranked player as well as number one seed here had to work hard to beat Haas, and it was not until midway through the third that the outcome was certain; until then an impossible dream could still flutter in the minds of Tommy’s many fans, as it surely did in his, for he gave absolutely no indication he intended to do anything but win.

This is the sort of thing that makes the tournament dramatic. Two weeks of three-, four-hour, five-set matches, big crowds, high stakes in money and prestige, and of course the classy and ancient décor — and decorum — that the French Tennis Federation, which owns the tournament, does its best to maintain even while it obsesses over the need to change things in order to keep up with the times, all these put special pressures on the players. This is why there is an inherent advantage to be among the top of the top; it creates a psychological edge that gives you a boost even while it intimidates most of the others.

This year there were only three big four because Andy Murray, last year’s U.S. Open winner, stayed away with injuries, in the hope that the rest will allow him to play at Wimbledon in a few weeks. That, of course, is an unhappy way to change the normal order of things. Nevertheless, its impact has been significant, because it meant that one half of the draw was missing some ballast, and indeed the unlikely, but by no means unthinkable, occurred: the half of the draw that had only one big four is going to produce a finalist from outside that special circle. Roger Federer, the most admired and most successful player of the past ten or twelve years and the third seed here, lost in the quarters; the bottom half of the draw must send either the number eight or the number five, Jo-Wilfried Tsonga or David Ferrer.

It also means that the biggest rivalry in tennis this year, the one between Rafa Nadal and Novak Djokovic, will find expression not in the final but in the semi. This is no big deal since it still means they can measure up at the highest level; and in a sense it is a very good deal for the sport since it brings Tsonga and Ferrer to the attention of more fans. They are fine players who have suffered from number-two-ism for years (Ferrer is 31, Tsonga 28). It will be good for the tennis business as well as for them to win a few big ones and spend a few years in the sunshine of world-wide fame. This is so even if you believe, as some still do, that it is not whether you win or lose but how you play the game, and so forth — the old Victorian ideal of sportsmanship and clean and fair and generous competition. The sport, like all other sports, needs some variety in its winners and champions in order to keep attracting young athletes who might otherwise choose other jobs — soccer, cycling, for example, or accounting or sports-writing.

Given the way Nadal dispatched his quarterfinal competition, Stanislas Wawrinka, and the way Tsonga handled Federer, it would be, no doubt, wonderful to see the two of them square off for the final. Federer himself heaped praise on Tsonga, refusing the Frenchman’s suggestion, made only half in jest, that the master let him win for a change. First of all, Tsonga had beaten Federer previously, most importantly in a fantastic five setter at Wimbledon two years ago (Tsonga lost the first two sets). But beyond the precedent that of course had motivational importance (“I can do it because I’ve done it”), Tsonga unleashed a game, which had been shown less spectacularly in the earlier rounds of the tournament, of concentrated, accurate power that shows how much he has worked to improve in the past two years. He seems to have made up his mind to stop being a very good, very nice French kid with great talent and seize his inheritance as the heir of France’s past winners here.

Nadal is an entirely different matter. Unlike Tsonga, he has nothing to prove here. He has won seven times, a record, and he has played in every final but one since 2005. But there is no doubting his hunger for still another title. For one thing, he wants to stop his great rival, Novak Djokovic, from winning on “his” territory. Of course he would also like to beat the Serb at Wimbledon and at Flushing Meadows and in Melbourne, but the clay courts of the Latin countries have a special meaning for Nadal, namely, he wins most often on them. This sense was surely heightened by Djokovic’s very public and oft-repeated announcement this season that winning the French Open, the only grand slam event he has not won, is his most important goal for 2013.

In the match against Wawrinka, who made it to the quarters by beating a local favorite, Richard Gasquet, in an excruciating and brilliant five-setter that was not won until the very last point, Nadal seemed to be warming up for Djokovic. He practiced. Nadal was clearly trying out different plays and tactics that he must think he will need. In particular, he worked on changing the pace. One reason why Roger Federer is viewed as the best player of recent years (despite dropping a tiny bit in the rankings, he did win at Wimbledon, last year — beating Andy Murray) is that he has the classic all-court game, including vary it as needed. He can do anything when he is at his peak, overcome any tactics thrown at him, hit more accurately and gracefully and consistently from more spots on the court than anyone else. This means you never really know what he is going to do to you — because there is nothing, evidently, he cannot do.

Both Djokovic and Nadal, of course, have all around games too. Still, it is somewhat easier with them to recognize characteristic styles, which means that the very few players who can compete with them can at least try to form game plans against them. You know, for example, Djokovic is going to hit fantastic returns of serve, hit back anything you send to him so long as he reaches it (and there is very little he cannot reach), run you all over the court, and then ambush you with a perfect drop shot. You know Nadal prefers the big forehand topspin bombs he fires as soon as you give him an opportunity — and even when you do not. Djokovic will try to limit those, just as Nadal will try to keep Djokovic back, prevent him from seizing the point’s rhythm.

It will be fascinating. Before then, Tsonga and Ferrer must determine which of the two will end up against one of the two great pretenders to the Federer mantle. Tsonga is looking awfully sharp, but Ferrer, who beat the magnificent Tommy Robredo — the other Haas, so to speak, an improbably great quarterfinalist who had been winning five-setters serially, five-setters, moreover, in which he kept losing the first two — the same day Tsonga beat Federer, is considered by many observers to be the grittiest, toughest defensive player in the game. He is a child of the clay courts of southern Spain and he has been playing without apparent chinks in his armor here.

So that is the lineup. It seems very unfair to the ladies to leave them out of the preview. Before the gentlemen came on court yesterday, Maria Sharapova played a magnificent comeback against Jelena Jankovic, while Vika Azarenka had a rather easier time with Maria Kirilenko. One of these Slavic girls will find herself facing Serena Williams, the favored player on the ladies’ draw this year, seeking her first title here since 2002. She has to beat Sara Errani first, likely but — you never know.