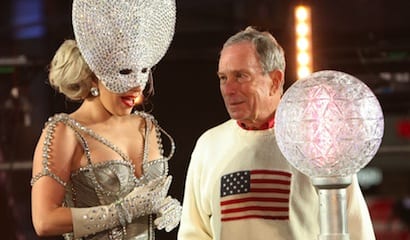 ONE HUNDRED AND FIFTY three years after Abraham Lincoln delivered his famous speech at Cooper Union, the mayor of New York City, Michael Bloomberg, appeared in the same hall to deliver a graduation address.

In those recent remarks, Bloomberg paid tribute to Lincoln, and then went on to utter the following formulation: “In New York City, we welcome all people to practice their faiths here—and I believe we must always defend their right to do so, whether they want to build a church in Washington Heights or a mosque in Lower Manhattan. But we must never allow religious rules to dictate society’s laws.”

It was a remarkably foolish, clumsy, and ignorant comment, but also an illuminating one. Never mind the historical roots of contemporary laws against murder and stealing in the Biblical Ten Commandments. Put aside the Declaration of Independence’s reference to all men being “endowed by their Creator with certain unalienable rights.” Consider merely that Lincoln’s own Cooper Union address, the same one Bloomberg acknowledged admiringly, had been originally intended for delivery at abolitionist preacher Henry Ward Beecher’s Plymouth Church in Brooklyn Heights. The speech called slavery “evil” and called on the audience not to be diverted by “sophistical contrivances” such as “appeals beseeching true Union men to yield to Disunionists, reversing the divine rule, and calling, not the sinners, but the righteous to repentance.” This was the speech that concluded, “let us have faith that right makes might.”

I don’t think it’s going too far out on a limb to express the view that Lincoln has the better side of this argument, which, after all, isn’t so much about religion dictating laws as it is about informing them or inspiring them. And on the subject the mayor was referring to, “marriage equality,” the question is how to write civil law when some religious denominations embrace gay marriages and others prohibit them.

In Bloomberg’s defense, it might be said that he’s a mayor, not a political philosopher or a historian of the Civil War. He might have been the victim of inartful phrasing by a speechwriter asked to crank out too many commencement speeches in too little time. It must be said, too, that Lincoln is a rather high standard of comparison for any contemporary American politician.

But it was an illuminating moment nonetheless because it underscored one of the basic problems with Bloomberg’s mayoralty and with the technocratic utilitarian approach he has brought to governing the city: He doesn’t start out from first principles.

THE 71-YEAR-OLD billionaire, a Democrat-turned-Republican-turned-independent, is nearing the end of his third and almost certainly final term as the elected leader of the nation’s most populous city. Lincoln he isn’t—though he probably should be more popular with conservatives than he is. It’s a peculiar political paradox that Bloomberg’s predecessor, Rudolph Giuliani, a tough-on-crime, tough-on-terrorism, pro-charter-school mayor who favored abortion rights, gay rights, and open immigration, was a popular figure in the Republican Party, while Giuliani’s handpicked successor is widely reviled on the right even while pursuing many policies similar to those of the Giuliani administration.

“He actually was tougher than Rudy on crime,” marvels Mitchell Moss, a professor of urban policy at NYU who advised Bloomberg’s initial mayoral campaign in 2001. The number of homicides recorded in New York City has plunged during Bloomberg’s tenure to levels not seen since the early 1960s. And while violent crime has declined in other cities, too, New York ranks as the safest large city in America. The mayor has held firm against predictable complaints by leftist advocacy groups about the police’s “stop, question, and frisk” practices. The aggressive tactics extend to counterterrorism, too. The New York Police Department has, in the aftermath of the 9/11 attacks, developed and deployed impressively robust capabilities. The Associated Press won a Pulitzer Prize for a series reporting that “police had systematically spied on Muslim neighborhoods, listened in on sermons, infiltrated colleges and photographed law-abiding residents.” But Bloomberg and his police commissioner, Raymond Kelly, ignored the politically correct journalists, and the city has so far been spared a Boston Marathon-style attack. The Bloomberg NYPD also made mass arrests of protesters at the 2004 Republican National Convention and eventually cleared out the Occupy Wall Street protesters who had taken over a public plaza in the financial district.

On education, Bloomberg, while stopping short of vouchers or tuition tax-credits, has taken good advantage of the charter school law that Giuliani and Republican Governor George Pataki won passage of in 1998. The teachers union’s public enemy number one, charter-school operator Eva Moskowitz, is on track to have 11,500 students in 23 schools by the end of the Bloomberg administration. The financier Carl Icahn is running four charter schools in the Bronx. Home Depot co-founder Kenneth Langone and the hedge fund manager Stanley Druckenmiller back another charter school operator. These schools and others like them—KIPP Academy, Democracy Prep—are achieving impressive results. Even some of New York’s non-charter public schools are functional enough under Bloomberg.

Why, then, given the respectably successful, and even arguably conservative, record on policing and education, has Bloomberg’s mayoralty been such a disappointment?

In part, Bloomberg has failed to meet his own test as a technocrat. “As a manager, he’s barely competent,” says Fred Siegel, the author of a book about Giuliani’s mayoralty.

Another example: It’s taken the city more than six months to conduct the hearing I requested by mail on a parking ticket I got in November. The city’s finance department sent me a bill for the amount of the ticket plus a penalty, along with a notice of impending default judgment threatening to garnish my wages and tow my car. When I called 311, the city’s central complaint switchboard and a Bloomberg innovation, and asked what kind of system it was where you had to pay a penalty before you even got a hearing on whether you did anything wrong, I was told to disregard the notice because “It’s a glitch in their system.”

If Bloomberg terminals worked as poorly as New York City government does after a decade of Mr. Bloomberg’s leadership, the world financial system would grind to a halt.

BUT IT’S NOT just the incompetence; it’s the ideology. This is the Bloomberg-knows-best elitism that gets the mayor’s nanny-state initiatives lampooned on late-night talk shows and in editorial cartoons. His effort to limit the portion size of sodas as part of a battle against obesity was such a bizarre overstretch that it was too much for even the New York Times editorial board—not exactly famous as a hotbed of free-market libertarianism. The mayor and his health commissioner announced the results of a “National Salt Reduction Initiative” just three months before a new national study that the Times put on its front page under the headline “No Benefit Seen in Sharp Limits on Salt in Diet.”

The mayor’s initiatives on other national issues, such as guns and immigration, have brought little in the way of legislative results—though not for lack of trying. Bloomberg and his coalition of Mayors Against Illegal Guns have trumpeted settlement agreements in lawsuits against gun dealers in Virginia, Georgia, and South Carolina, as well as a voluntary deal with Walmart to videotape firearms sales. When such agreements failed to stop the school shooting in Newtown, Connecticut, Bloomberg poured a reported $12 million into advertising against lawmakers, including at least one Democrat, who oppose even stricter regulation of gun sales. Bloomberg’s argument is that the guns from the South wind up being used to commit crimes in New York City, but the impression left is that he wants to impose his own Big Apple sensibilities on the rest of the country.

His approach on energy is similar. Arguing that coal contributes to global warming (which hurts low-lying coastal New York), Bloomberg gave $50 million to the Sierra Club’s “Beyond Coal” campaign and showed up in Chicago to join Mayor Rahm Emanuel in celebrating the closure of a coal-fired power plant there. The mayor and the Sierra Club claim credit for the closure of more than 112 coal-fired power plants, and out-of-work Appalachian coal miners or utility employees may reasonably blame Bloomberg and ask where their share of that $50 million is. The shift from coal, though, may be more the result of market forces such as the natural gas boom than the effect of Bloomberg’s bullying.

Under Bloomberg, the city’s spending has swollen to about $70 billion a year from about $40 billion a year. That’s roughly in line with growth in federal spending over the same decade-long period. The city’s education spending has doubled (though enrollment and test scores have not). The city’s costs for health insurance for its employees have nearly doubled; only 5 percent of city employees contribute to the cost of their insurance, while more than 90 percent of private-sector employees do. Bloomberg paid for all this in part by raising property taxes, and a recent increase in the state and federal income tax means that, combined with New York City’s personal income tax, the top marginal income tax rate in New York City is now a staggering 51.7 percent. That’s second in the U.S. only to that paid by high-income Californians. As Fred Siegel put it to me, Bloomberg avoided the hard questions and didn’t do anything to change the city’s political culture.

All these problems haven’t prevented buyers from lining up for the privilege of living in Brooklyn brownstones that now sell for more than $2 million, or Manhattan apartments whose prices are in the eight-figure range. One way to look at the soaring prices is that they are a signal Bloomberg has succeeded in creating a place people want to live in. But they could also be the effect of Federal Reserve and Treasury policies that have inflated asset prices, combined with city land use policy that, while rezoning some areas to make way for new residential and commercial development, has designated vast swathes of the city as historic landmark districts where new building is nearly impossible.

Partly as a result of the high taxes and housing costs, families are moving out of the city to other places. Staying in many cases requires a choice to have fewer children, or not to have children at all; there were 80,485 abortions in New York City in 2011, according to the city’s department of health. The mayor hasn’t made reducing the number of abortions a priority; instead, he opposed the nomination of John Roberts as chief justice on abortion-rights grounds while accepting the endorsement of the NARAL Pro-Choice New York. Bloomberg also endorsed President Obama for re-election, citing the abortion issue.

The best argument for Bloomberg is that New York’s next mayor, who will be elected this fall, may be even worse. Speaking to another group of graduating seniors this spring, this time at Kenyon College, Bloomberg said, “I will leave you with the words I tell everyone I hire: Don’t screw it up.” Had this mayor been a bolder or more principled leader, though, more like Lincoln at Cooper Union and less like Bloomberg at Cooper Union, that hope for his successor might be closer to a sure thing. Instead, it looks like wishful thinking.