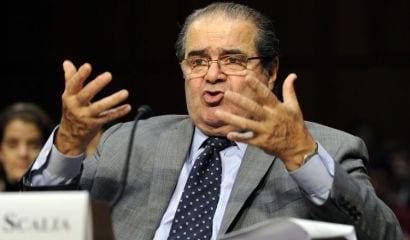 IT LOOKS like the drums are going to be beating over the summer for a special prosecutor to go after President Obama. The president is in trouble on every one of the scandals erupting around him, from Benghazi to the Justice Department’s shenanigans with the press. The big one is the prospect that, with the misdeeds committed via the IRS, there was a plot to steal the 2012 election. This is a good time to pour oneself a slug of scotch, retire to one’s study, and read one’s copy of Justice Antonin Scalia’s dissent in the Supreme Court case known as Morrison v. Olson.

Morrison v. Olson was the case in which the Supreme Court affirmed the use of an independent counsel, authorized by Congress in the wake of Watergate. It involved the pursuit by such a counsel, Alexia Morrison, of a Reagan administration official, Theodore Olson, who was under investigation for having given allegedly false testimony to Congress. Olson was cleared of wrongdoing, but not before he challenged the constitutionality of the very idea of a prosecutor independent from the president.

Olson won at the Court of Appeals for the District of Columbia Circuit. But he lost at the Supreme Court, 7 to 1, in one of the most disappointing decisions ever handed down from the high bench. The case is one of those remembered for the honor that the lone dissenter, Antonin Scalia, brought to the court. Scalia’s concern was the violence the Independent Counsel Act did to one of the sturdiest props of liberty in the Constitution—separated powers.

Scalia began by citing the Massachusetts constitution, drafted in 1780, which gave the principle an early expression. “In the government of this Commonwealth,” the Bay State parchment says,

When we think of liberty in this country, we tend to think of the Bill of Rights. That’s understandable, but Scalia attributed to the Founders the notion that the separation of powers was “the absolutely central guarantee of a just government.” He referred to Federalist 47, in which Madison wrote: “No political truth is certainly of greater intrinsic value, or is stamped with the authority of more enlightened patrons of liberty.” Scalia asserted that without separated powers, the Bill of Rights would be worthless.

Even though Olson lost the battle at the Supreme Court over the constitutionality of independent counsels, his point about the dangers they present turned out to be prophetic. This came into focus with the independent Iran Contra prosecutor, Judge Lawrence Walsh. Then the prosecutor pursuing President Clinton, Judge Kenneth Starr, though a lawyer of brilliance and integrity, pushed his investigation to the point that no one wanted to renew the Independent Counsel Act. It is now off the books.

This was a period in which I differed with two of my journalistic heroes, Robert Bartley of the Wall Street Journal and R. Emmett Tyrrell, Jr., of this magazine. Bartley—now gone, alas—had sided with Olson in the constitutional struggle over the independent counsel. But once the Supreme Court spoke, Bartley concluded that conservatives should use the tools the justices had vouchsafed. Tyrrell was of a similar view. I preferred that if the president was to be pursued, it be done through the House of Representatives.

My concern was one that Thomas Jefferson had aired in a famous letter to a U.S. attorney in Virginia, George Hay.

The leading principle of our Constitution is the independence of the Legislature, executive and judiciary of each other…But would the executive be independent of the judiciary, if he were subject to the commands of the latter, & to imprisonment for disobedience; if the several courts could bandy him from pillar to post, keep him constantly trudging from north to south & east to west, and withdraw him entirely from his constitutional duties?

Scalia, in his dissent in Olson, worried about the effect an independent—meaning uncontrollable—prosecution would have on a president’s courage. “Perhaps the boldness of the President himself will not be affected—though I am not even sure of that.” The prescience of the remark is astounding in light of what we now know took place in the years before September 11, 2001. A distracted president left much of the decision-making in the twilight struggle with al Qaeda to his national security adviser, Samuel “Sandy” Berger, and when we had Osama bin Laden in our sights, Berger flinched.

According to the report of the official commission that investigated 9/11, Mr. Berger was presented with plans to act against al Qaeda on four separate occasions—in the spring of 1998, June of 1999, December of 1999, and August of 2000. Each time, Mr. Berger was an obstacle to action. No one blames anyone other than al Qaeda for the attacks that ultimately reached our shores, but the question was: Why was it Mr. Berger rather than President Clinton himself making all these judgment calls?

One answer was that the president was facing, in the words of the 9/11 commission, “extremely difficult domestic political circumstances.” An independent counsel was after him and opponents sought impeachment. The boldness of the president may have, in fact, been affected, just as Scalia warned, and America reaped the whirlwind. It’s only, again, al Qaeda’s fault. But it’s nonetheless a lesson to remember at a time when the sabers are rattling from the Korean DMZ, to the seas of Asia, to the Middle East.

IT’S NOT MY intention to suggest, even for an instant, that anyone fail to pursue the misdeeds of either President Obama or members of his administration. It is my intention to note that as the vast investigative apparatus of our constitutional system swings into action, we are entering a dangerous period. It will be pointed out that the kind of independent counsel The Great Scalia warned of can’t be set up today; the lapsing of the law that set such prosecutors on Presidents Reagan and Clinton is the result of experience. What this suggests is that the better part of wisdom would be for the House to start its own pre-impeachment process earlier rather than later, and for it to focus on the broadest line of attack.

It, after all, is for “high crimes and misdemeanors” that the Constitution empowers the Congress to remove a president from office. Feature what happened to Andrew Johnson. It was neither for perjury or stealing nor “conspiracy” that he was impeached. It was for his contempt of the Tenure of Office Act, which, over Johnson’s veto, Congress had passed in an effort to protect Secretary of War Edwin Stanton from being fired. I side with Stanton and the Radical Republicans. But the Tenure of Office Act was unconstitutional down to the ground, and is so understood by almost everyone today. Johnson came within a whisker of being ousted for his contempt of an unconstitutional law.

No contempt displayed by Johnson was as bald as the contempt President Obama has displayed for the Supreme Court’s ruling in Citizens United, which cleared the way for 501(c)(4) corporations to participate in the election. It was that ruling that the Internal Revenue Service appears to have been attempting to foil when it sought to deny, delay, or obstruct conservatives from enjoying the access that the Supreme Court had opened up. Pursuing this is a task much better suited to the House of Representatives than a special prosecutor. Whether a conviction could be won in a Senate controlled by the Democrats—that’s a question best answered after the charges, if any, are distilled and formulated in a bill of impeachment. One thing that history shows is that when the House determines to act, it and the Senate can move quickly.