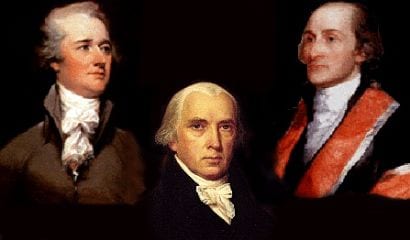 In a time when a supposedly elusive bipartisan consensus is actually alive and well in the service of statism and federalism is considered a quaint rhetorical device rather than a bulwark against tyranny, is it reasonable to believe long-discarded founding principles of our fledging former selves might offer some measure of salvation?

Perhaps. Perhaps not. But two politics professors at The King’s College in New York City are doing their damnedest to nudge us toward answering in the affirmative via a edifying, challenging series of essays — e.g., “What’s a ‘Trigger Word’ Citizen To Do?”; “Reflection and Choice Or Accident and Force” — and a well-curated Twitter feed.

To further their case, C. David Corbin and Matt Parks submitted to the friendly inquisition that follows.

To your credit, these essays don’t feel as if they are an exercise in pounding an antique square philosophical peg into the round hole of contemporary politics. Have you been at all surprised by the ease with which certain principles therein can illuminate potential solutions to modern folly?

We begin where the Hamilton, Jay, and Madison did: with a belief that human beings are human beings wherever you find them, fallen — or imperfect — yet redeemable. Educable if not perfectible. If that’s the case, then our project is not really antiquarian, but rather more like a contemporary imitation of theirs: taking the universal principles that they applied to their political context and applying them to ours. The argument they make for the Union, and the federal republican institutions that would best support it, rests on about as fair an accounting of human nature as one can find in the history of political philosophy. We shouldn’t be surprised then to see how their thought illuminates modern folly — especially here, where we continue to struggle, ever optimistically but never quite confidently, to “establish good government from reflection and choice” (Federalist #1), to see  (Federalist #2) and cultivate (Federalist #3) our national unity, and to manage our public affairs well enough to produce confidence at home and respect abroad (Federalist #4).

What was the genesis of the series?

Five years ago we created a sequence of three courses at The King’s College on the development of the American regime for the college’s common core; perhaps the only American college or university that requires all of its students to take three courses in American political thought. The more we taught the courses, the more we realized that the key question in the unfolding story of the American regime is whether our political affairs are guided by ‘reflection and choice’ or ‘accident and force,’ to borrow Hamilton’s language in the first Federalist essay. And it definitely appeared that as we moved forward in American history, a majority of our elites had become convinced that accident and force were excusable means if it meant the establishment of their vision of a just society. The series was simply an extension of our attempt in the classroom to clarify what is at stake if we forego reflection and choice.

Do the Federalist Papers offer posterity something of unique rhetorical/political utility when compared to other founding documents?

The Federalist Papers are unique in several ways — the most obvious perhaps is that they are far more comprehensive than the famous speeches and public documents of the Founding era. The argument for the Constitution involves, at some level, every important political question: the purpose of civil government and the nature of political union, the causes of war and the sinews of peace, the principles of the rule of law and political justice, the foundations of republican government, the essences of executive, legislative, and judicial power, and many others. Moreover, as a collaborative effort of a Virginian and two New Yorkers, a future Republican and two future Federalists, the leader of the first cabinet, the leader of the first Congress, and the first Chief Justice, they speak with special authority for the founding generation as a whole — a point acknowledged even by their contemporaries, including Thomas Jefferson and John Marshall.

You freely admit the kind of “political reclamation project” discussed in these essays would “require leaders who were willing to make arguments, and citizens who were willing to consider arguments and empowered to make choices.” I’ll admit I am personally bearish on such leaders coming forward or anything resembling a working majority of citizens reacting positively to a “empowerment” that will inevitably be demagogued by opposing partisans as “Social Darwinism.

So…why am I wrong?

Perhaps you’re not. We’ll see. But that we have a choice is undeniable. I think of a brilliant passage in the late David Foster Wallace’s pieced-together final novel, The Pale King, in which the main character suddenly realizes that the commercial bumper for his favorite soap opera — “You’re watching As the World Turns” — means more than it intends: You’re watching as the world turns. Certainly many choose to watch with little reflection. Perhaps the first step in the reclamation comes in making the argument that we all choose and that our choices make a difference — for ourselves and our neighbors. Part of that common human nature the founders took for granted was the reality of moral responsibility, which is both anti-Darwinian in its metaphysical core and anti-hierarchical in its societal implications.

As politics professors at King’s College, what is it like introducing young minds steeped since birth in a steadily expanding, rarely challenged welfare state to these works?

Most days it’s the best job in the world.  Many of our students come to King’s already sympathetic to a critique of the welfare state and the rest of the Progressive political apparatus. Still, every generation has its blind spots: in our college days twenty years ago we all wanted to save the whales; today they’re afraid global warming might give them a little too much ocean to swim in. Our classes constantly take us back and forth from theory to practice and from early American history to the present day. Contemporary applications often give students a point of contact with earlier concerns. At the same time, reading older works of political thought gives us new insights into present concerns — and reminds us that there is really nothing new under the sun. These readings, alongside twenty extra years of life’s success and failures, hopefully give us a better insight into our own limits and the limits of human things than we had as know-it-all undergrads — and perhaps help our students avoid, at least to some degree, the repetition of our own follies.

For those familiar with the most typically quoted Federalist essays, do you have any suggestions for overlooked gems that perhaps you believe should be more widely noted?

What is remarkable about the Federalist essays is how deep the authors reach in discussing sometimes mundane topics. For example, Federalist 37 is basically a plea for humility in judging the Constitution, but it includes one of the most profound discussions of the limits of ethical knowledge anywhere in the history of philosophy. Federalist 62 is a defense of the nuts and bolts of the Senate: term length, mode of election, and the like. But, as Madison begins to explain the benefits of a bicameral legislature, he gives a powerful defense of the rule of law. The group of essays from 2-10 is incredibly helpful in understanding the constants of international affairs and the Founders’ ideas on nationhood. We could go on: Federalist 23’s discussion of political ends and means, Federalist 72’s on the link between an officeholder’s interest and duty, Federalist 84’s challenging case against a Bill of Rights.

You write of ideological “progressives” who are “loyal to the ruling class and the government it ultimately controls” and dedicated to the “permanent infrastructure of the modern bureaucratic state.” Obviously, over the last several decades that ruling class has worked assiduously to obstruct and preempt political processes and debate by delegating rulemaking authority from elected representatives to unelected bureaucrats. First, does that set-up remotely resemble any conceptual framework offered up in the Federalist Papers? And, if so, does Publius have any advice for how to advance republican democracy in the face of undemocratic forces that adopt the rhetoric of democratic justice?

The new progressive aristocracy differs from the older constitutional liberal aristocracy in that while the latter were cautious of how men might be led astray by their passions, the former in moving from elective to bureaucratic politics more determinedly questions the multitudes’ common sense, undermines its will, and justifies the whole affair by manipulating its passions. I think Publius would argue that if republican statesmen would view their fellow citizens as equals once again, and work to give them as many choices (elective) as possible, that this in turn might ignite a greater willingness in the people to employ reflection and choice in determining their affairs moving forward.