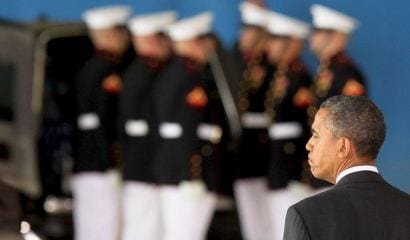 The President of the United States is not only the most powerful man in the world, but also the most public, his daily life chronicled to the minute by the national press, his every word and action reported and analyzed by journalists and commentators. What the American president says and does is always automatically newsworthy and therefore it is profoundly mysterious that a hushed silence surrounds one of the most disturbing events of Barack Obama’s presidency, the Sept. 11, 2012, terrorist attack on the U.S. consulate in Benghazi, Libya, that killed four Americans, including Ambassador Christopher Stevens.

Where was the president? This is a simple question, one to which the American people might reasonably expect an answer, but more than nine months after that deadly night, we still have not gotten a detailed answer and most in the media seem to have lost all interest in the question. White House correspondents have let themselves be played like chumps, treated like court stenographers whose job is to transcribe the administration’s talking points. No one seems to have tried to pin down Obama himself on this question — what, exactly, was he doing while Islamic terrorists brutally slaughtered four Americans? — and only rarely have any of the presidential henchmen been asked about it. One of the few exceptions to the media’s see-no-evil policy of voluntary ignorance occurred last month, when Chris Wallace of Fox News asked the president’s senior adviser Dan Pfeiffer about Benghazi.

Wallace began by reiterating what is known about Obama’s actions that day, saying the president “had a meeting with [Defense Secretary Leon] Panetta in the afternoon … [and] wanted them to deploy forces as soon as possible. The next time he shows up is that [Secretary of State] Hillary Clinton says she spoke to him at around 10 o’clock that night, after the attack at the consulate — not as it turned out, at the annex, but the attack at the consulate — had ended. Question: What did the president do the rest of that night to pursue Benghazi?”

Pfeiffer responded that “the president was kept up to date as it happened throughout the entire night, from the moment it started till the end.” Pfeiffer then proceeded to portray Obama as the helpless target of “a series of conspiracy theories the Republicans are spinning.” The adviser elaborated on the number of documents released and the congressional hearings held. What “we are going to do,” Pfeiffer said, is “to move forward and ensure it doesn’t happen again.” Wallace listened patiently to this lengthy evasion and then said: “With all due respect, you didn’t answer my question. What did the president do that night?”

Anyone who saw that memorable interview — and if you missed it, please click here to watch it on YouTube — knows what a reaction Wallace’s persistence provoked from the White House aide. Pfeiffer blustered with indignation at what he called an “offensive” suggestion “that the president didn’t take action” and huffed that “there’s no evidence to support” such a suggestion. Wallace remained calm and reiterated: “I’m simply asking a question. Where was he? What did he do?” Whatever the facts of the matter may be, Pfeiffer refused to answer specifically, and so the question lingers: Where was the president?

No suggestion is implicit in that question, but the refusal of the administration to provide a detailed answer — and its readiness to accuse anyone who asks such a question of being a conspiracy theorist — quite clearly suggests that the White House doesn’t want full knowledge of Obama’s actions on the night of the Benghazi attack ever to become public. Unlike Chris Wallace, most in the press corps have been willing to accept the administration’s non-answers, so that we are left with what Rich Lowry has called “a blank spot” in Obama’s presidency. And to invoke the famous words of the former Secretary of State, what difference at this point does it make? Perhaps not much to civilians stateside, who might be tempted to dismiss the whole affair as another political kerfuffle in Washington, but it means a great deal to those who devote themselves to serving their nation overseas. Just ask Kevin Norton.

“It’s bothered me ever since it happened,” the 36-year-old former Army captain says of the administration’s response to the Benghazi attack. “It makes no sense at all.”

Norton served a tour of duty in Iraq with the Third Infantry Division in 2005, and was reactivated for deployment to Afghanistan as a combat adviser in 2009. Like every other American soldier, Norton was trained to “leave no man behind.” He summarizes the common understanding of troops under fire: “Everybody knows that if the s–t hits the fan, they’re going to do whatever it takes to get you out of there.”

What happened in Benghazi, Norton said in a brief telephone interview, was an “egregious violation” of that basic promise our nation makes to its courageous men and women who put their lives at risk to serve America in potentially hostile foreign countries. Although it appears Ambassador Stevens and State Department aide Sean Smith were both killed before any U.S. forces could have rescued them, the same is not true of two former Navy SEALS, Tyrone Woods and Glen Doherty. Both of them were part of a security detail that tried to save Stevens and Smith at the consulate, and were tasked with evacuating other Americans after the initial attack. Woods and Doherty were killed in a subsequent assault on the CIA annex in Benghazi. More than six hours elapsed between the first alarm from the consulate — “We’re under attack, we need help, please send help now” — and the attack on the annex in which mortar shells killed Woods and Doherty. By 4:30 p.m. Eastern time, Secretary Panetta was told of the desperate crisis in Benghazi and, about an hour later, Secretary Clinton called CIA Director David Petraeus to coordinate a response. Exactly why that response was insufficient to save the lives of Woods and Doherty remains hotly disputed. CBS News reported that the Counterterrorism Security Group was not convened the day of the Benghazi attack and that State Department officials ruled out deploying the Foreign Emergency Support Team.

In the third presidential debate last fall, Obama said that “when we received that phone call” notifying him the consulate was under attack, “we did everything we could to secure those Americans who were still in harm’s way.” However, the Secretary of Defense seemed to contradict the president’s claim that “we did everything we could.” While the Pentagon was “prepared to respond to any contingency and certainly had forces in place to do that,” Panetta told reporters last October, “the basic principle here … is that you don’t deploy forces into harm’s way without knowing what’s going on, without having some real-time information about what’s taking place.” Panetta said he and his top U.S. military advisers “felt very strongly that we could not put forces at risk in that situation.” But there were already Americans in harm’s way at Benghazi where, in Kevin Norton’s evocative phrase, the s–t had hit the fan and, from the moment the first call for help went out, there was the expectation that an all-out effort would be made to save them.

Did the American military have “real-time information” from Benghazi? It has been reported that a U.S. surveillance drone was overhead less than two hours after terrorists yelling “Allahu akbar” assaulted the consulate, but how much information did Pentagon brass really need? “The only thing they had to know was, Americans were under attack,” says Norton, who last week expressed his concerns in an op-ed column for the Wall Street Journal entitled, “Benghazi’s Record of Broken Trust.”

Trust in the Obama administration nowadays is nearly non-existent, as what was once promised as “the most transparent administration in history” has proven to be a menacingly opaque edifice shrouded by a fog of secrecy and deception. Questions are evaded rather than answered, and the president’s minions insist it is “offensive” even to ask questions. Nevertheless, I called the White House Press Office last week and asked them if they could provide me a timeline of the president’s activities on the day of the Benghazi attack. Send an e-mail, I was told. So I e-mailed press@who.eop.gov, explaining that my editor, R. Emmett Tyrrell, Jr., had asked me to look into this, and politely asking if they could send any information about it. A day later, having received no response, I re-submitted my request with a note (“just to make sure it didn’t get lost in the shuffle”) and asked if they could at least send a reply acknowledging receipt. By Monday evening, there still was no answer. I guess the one way to make sure the government isn’t reading your e-mail is to send it to the White House Press Office.

Considering what we’ve learned about how the Obama administration deals with political opponents on the president’s Enemies List, perhaps I should be grateful to be ignored by the White House. What troubles me, however, is that most in the media appear content with being stonewalled by this administration, shrugging off their evasions and excuses, while pretending that the deaths of four Americans in Benghazi require no further explanation. Brave men died last September and, as Kevin Norton says, trust has been broken. More than nine months later, the question remains unanswered: Where was the president?