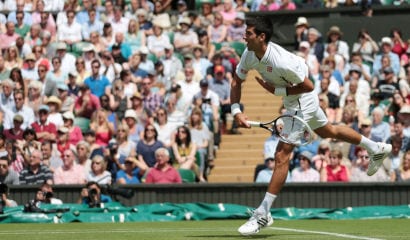 You cannot avoid the feeling that the tournament they call “The Championships” are the World Series of tennis.

They take place every summer at the All-England Lawn Tennis and Croquet Club in the London suburb of Wimbledon, and while there is surely a case to be made that the tennis world series ought to be viewed as a kind of four-part, four-city playoff competition outside the “regular season,” there is also a case to be made that part of the charm of tennis is that it resists uniform structures and it is best to leave things alone and not try to give high-sounding value to tournaments and events that in truth gain their importance, and the respect of fans and players, from the cultivation of their own traditions and the quality of the play that they inspire.

This view of the tennis big leagues seems especially difficult to resist during The Championships or, as is more commonly said, Wimbledon — even when, indeed especially when, you are not invited to watch them live. While I tend to agree with Groucho Marx that any club that would have me as a member — or even as a guest — is not worth the effort to join, I admit to being a little awed at the stiffness of the All-England’s etiquette, its dress codes for players and spectators, its restrictive press credentialing, its pomp, even its sissy customs like this thing about eating strawberries and cream, you know what I mean, the whole Brit shtick.

The writer Michael Mewshaw, whom full disclosure requires that I mention I know him personally, has observed (notably in Short Circuit, one of the rare tennis books you should read to read, whether or not you give a hoot about tennis) on this special English quality of standing apart, different, aloof from the wogs, with his warm humor as well a certain degree of Yankee indignation — he is from Maryland, actually, played basketball on the legendary DeMatha teams — but he admits that he goes to Wimbledon every year. As who would not?

Part of the reason, I now can make the confess, I joined Mr. Tyrrell in urging the Republican Party to nominate London mayor Boris Johnson (born in New York) as its candidate for president was not only that he is a low-tax man and a true blue conservative, also he must have an in at the All-England. The truth is, I am not so sure the All-England gives a damn whether the mayor or anyone else has an in, they have their rules and they apply them to everybody, even their own members. And in fact it would be one of the wonderful things about this club that, in fact, it can tell the mayor to stop talking rot and forget about inviting louts like visiting American reporters to his box, for I assume he sits in a box when he attends the matches at the historic Centre Court, over which they built a retractable roof despite the objection of the really old old guard after the historic match between Rafa Nadal and Roger Federer in 2009, which some claim was the greatest match in the history of the Club but I say hooey, there is no such thing as the greatest event in any sport. Actually, I wish I could check with Mr. Hillyer on this point, he tends to makes lists of greatest Super Bowl games and best NBA series ever and most fantastic pitching duels in the history of baseball, and all this sort of thing, but he is busy running for Congress or what-all and he cannot be disturbed.

As a patriotic American and a small r republican — much shakier as a small d democrat — I stand with Jimmy Connors in his historic gesture of defiance at the club many years ago, but as I grow wiser (or stupider?) with the years and the experiences, I have to admit it was kind of childish, not to say rude, and where does it get us? Where does it get us to snub the Queen of England? England is our oldest and most reliable ally, and even as we now stand shoulder to shoulder with our gallant French allies in defending black Africa against Arab wackos, we know that when the crunch really comes — and it will come — we must get some help from our friends.

Anyway, what Mewshaw argued in that book, whose pages of vignettes, portraits of players, and straight sports reporting are as alive today as they were when it was published 30 years ago, is that the game is sort of fixed. He was writing about a period when the men’s professional tour was still in its childhood. The Open era began in 1968. There were all manners of shenanigans. Today the prize money has increased hugely and even players who do not get past the first round can usually earn something that allows them to fly home with a little money in their pockets. This is bad as well as good. It is the way of the world. Mewshaw doubts it has reduced corruption in big time tennis, but at least it has made it smoother.

Seen from afar, it looks pretty good for the defending champ, Roger Federer. I admit I cannot remember who won on the ladies side last year, but if it was not Serena Williams it probably should have been. She is the unquestioned best player on the ladies side. Her ambition to win is boundless. Still, I am backing a very attractive Japanese lady, name of Kimiko Date-Krumm, not because she is 42 but because she has three smart phones. She travels on three continents and she has three smart phones. However, the American girls, I mean the ones playing supporting roles to Serena, and who collectively had a nice run at the French Open a few weeks ago, are off to a pretty good start at Wimbledon and for anyone who cares to catch some of this on TV, the ones to watch are Madison Keys and Sloane Stephens. But I would keep an eye also on the two beautiful Polish stars, the Radwanska sisters, Agnieszka and Urszula, because Polish girls, when they play tennis, they are the stuff of which dreams are made.

To stay on task, however, Federer has a shot at it not because, shockingly, Nadal, who was in the same draw, was knocked out in the first round, by a young man named Steve Darcis. This came as a terrible shock. However, the transition from clay, where Nadal is unbeatable, to grass, is extreme. On grass the ball skids, stays very low. You become aware that five-set matches on grass last two and a half hours, where on clay they go on for three and a half, four hours, four and a half.

Nadal has won at Wimbledon twice and has had a fantastic season so far. But this time he could not make the transition to the quick sharp rallies that prevail on grass. He lost to Darcis in three stunning sets. He is in need of recovery time. He must rest and recover and be prepared for the American season, which leads to the greatest tournament of them all, the U.S. Open at Flushing Meadows, Queens, the great, great northeastern borough of the greatest city on earth. That, that will be the time. But until then, Federer, the finest grass courts man since Rod Laver, must contend with Andy Murray, probably playing as well as ever in his life — and this includes last year when he won at Flushing Meadows. The Federer-Murray clash, when it happens, will be a thing of beauty. Maybe I can prevail upon Mr. Tyrrell to call Mayor Johnson and maybe, like Rahm Emanuel, he has clout. Though to be honest, I am not sure Mr. Emanuel could get me a bleacher seat at Wrigley Field these days. And I know he would not want to.