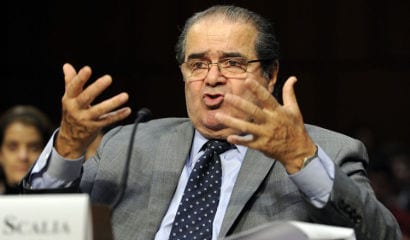 If John Keats is right that “Beauty is truth, truth beauty,” Justice Antonin Scalia’s crafted dissent must be truer than Justice Anthony Kennedy’s flat majority opinion. His language is sharp and highly metaphorical as he argues that the majority opinion is “diseased,” leading not to order and health but to a cancerous chaos. Here are a few of his most literary lines:

The root error of the Court’s erroneous decisions, Scalia writes, is its “diseased” exaltation of its own role: “The Court’s errors on both points spring forth from the same diseased root: an exalted conception of the role of this institution in America.” This, in turn, has caused the Court to diminish the Constitution, viewing it, Scalia writes, as “a technicality of little interest”: “The Court is eager—hungry—to tell everyone its view of the legal question at the heart of this case. Standing in the way is an obstacle, a technicality of little interest to anyone but the people of We the People, who created it as a barrier against judges’ intrusion into their lives.”

Scalia extends his “diseased” metaphor as he examines, in his view, the Court’s superfluous decision to even hear the case, which he later characterizes as a “contrivance”: “But wait, the reader wonders—Windsor won below, and so cured her injury, and the President was glad to see it. True, says the majority, but judicial review must march on regardless, lest we ‘undermine the clear dictate of the separation-of-powers principle that when an Act of Congress is alleged to conflict with the Constitution, it is emphatically the province and duty of the judicial department to say what the law is.’” Thus, we have the image of a “diseased” court “healing” the healthy.

Overall, the image is of a ravenous (“hungry”), “diseased” Court that has infected a healthy system with its malignant decision. Rather than bringing order (or health), the Court’s decision, Scalia states later, will bring “chaos.”

Scalia’s biting sarcasm on the topic of the Court’s jurisdiction in the case is also wonderfully entertaining. He suggests, for example, that Court must be confusing the American Constitution with a “foreign” one: “The majority must have in mind one of the foreign constitutions that pronounces such primacy for its constitutional court and allows that primacy to be exercised in contexts other than a lawsuit.” And regarding the issue of precedence for hearing the case: “One could spend many fruitless afternoons ransacking our library for any other petitioner’s brief seeking an affirmance of the judgment against it.”

If the Court’s decision to hear the case stems from a “diseased root,” its arguments of the majority opinion are characterized variously as “rootless,” “shifting” and impotent. On the actual merits of the arguments in the case, Scalia returns to his “root” metaphor: “There are many remarkable things about the majority’s merits holding. The first is how rootless and shifting its justifications are.” The majority decision’s opening seven-page discussion of State’s power, Scalia writes, goes nowhere: “What to make of this? The opinion never explains. My guess is that the majority, while reluctant to suggest that defining the meaning of ‘marriage’ in federal statutes is unsupported by any of the Federal Government’s enumerated powers, nonetheless needs some rhetorical basis to support its pretense that today’s prohibition of laws excluding same-sex marriage is confined to the Federal Government (leaving the second, state-law shoe to be dropped later, maybe next Term). But I am only guessing.”

And on the question of the supposed intent to harm homosexuals by making same-sex marriage illegal, Scalia writes that the majority opinion is oddly vague, even though its accusation applies both to members of Congress and the President himself: “I imagine that this is because it is harder to maintain the illusion of the Act’s supporters as unhinged members of a wild-eyed lynch mob when one first describes their views as they see them.”

(Scalia also makes use of a few cooking metaphors when discussing the court’s vague references to equality: “Some might conclude that this loaf could have used a while longer in the oven. But that would be wrong; it is already overcooked. The most expert care in preparation cannot redeem a bad recipe. The sum of all the Court’s nonspecific hand-waving is that this law is invalid (maybe on equal-protection grounds, maybe on substantive-due- process grounds, and perhaps with some amorphous federalism component playing a role) because it is motivated by a ‘bare … desire to harm’ couples in same-sex marriages. Ante, at 20.”)

Scalia ends with a biting characterization of the Court as lacking in careful thinking and “judicial temperament”: “In the majority’s telling, this story is black-and-white: Hate your neighbor or come along with us. The truth is more complicated. It is hard to admit that one’s political opponents are not monsters, especially in a struggle like this one, and the challenge in the end proves more than today’s Court can handle. Too bad. A reminder that disagreement over something so fundamental as marriage can still be politically legitimate would have been a fit task for what in earlier times was called the judicial temperament.”

In short, Scalia concludes that the Court lacks what he shows in his dissent — a fruitful literary mind, marked by precision, nuance, and clarity.