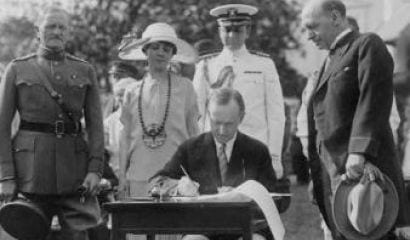 Calvin Coolidge, who became the 30th President, was born on the Fourth of July, as if Divine Providence had decided he was to be the embodiment of basic American values. As it turned out, he was.

He was born in 1872 to a long line of farmers who scratched out a living from the thin soil of Vermont. The residents of Plymouth Notch took it for granted that hard physical work was part of their destiny. As a boy, Calvin was no exception. Chores around the home and farm were part of his daily life.

Public service was also a birthright. Calvin grew up to believe that honest and earnest public service was the highest calling. He had an almost sacramental view of the democracy of the town meeting and, later, by extension that of larger deliberative bodies. No wonder. His father was a role model. In addition to his involvement in running the town, he was a justice of the peace and state legislator.

The characteristics that we think of as ideal American ones became his through example: thrift, modesty, self-reliance, tolerance, morality, and civility. Even in today’s age of relativism and situation ethics, such characteristics are widely admired.

These traits, combined with shyness, led him to use words carefully and economically (in public life he became jokingly known as “Silent Cal”). When one reads his speeches (he wrote his own), the value of this approach to communication comes through strongly. He did not use more words than were necessary to describe an idea. The resulting clarity made many people realize that he was dispensing common sense.

After finishing college at Amherst he read law and began to practice it in Northampton, Massachusetts. Public service also called, from city council to mayor, the state House of Representatives, state Senate president and lieutenant governor; he went on to become governor. In 1919 the Boston police went on strike. After the directly responsible authorities dithered, Coolidge, using the State Guard, stepped in and quickly brought it to an end. Nineteen policemen were fired.

When Samuel Gompers, head of the American Federation of Labor, asked him for leniency for the strike’s ring-leaders, Coolidge replied, “There is no right to strike against the public safety by anybody, anywhere, any time.” This statement brought him into national consciousness — and politics.

In 1920 he become Warren Harding’s vice-presidential running mate. Harding, who was later vilified by the Left, managed to create the Bureau of the Budget (now the Office of Management and Budget) to coordinate budgets of all Executive Branch units. Coolidge was able to use its creation to good effect in reducing expenses and providing balanced budgets.

When Harding died unexpectedly on August 2, 1923, Coolidge was sworn in by kerosene lantern by his father, a justice of the peace, in the family parlor at Plymouth Notch. He lost no time in taking hold of the reins of government.

He inherited Andrew Mellon as Secretary of the Treasury. Mellon had been engineering sharp income tax rate reductions. Coolidge began allotting several hours a week on his schedule to working with Mellon and his budget director to cut, squeeze, and trim expenses to get the federal budget under control and provide surpluses.

Coolidge believed that, in normal times, the government should get out of the way, for the most part, and let the private sector — the people — build and expand economic prosperity. He said, “I want the people of America to be able to work less for the government and more for themselves. I want them to have the rewards of their own industry, This is the chief meaning of freedom.” Would that Barack Obama had a hearing aid to overcome his tin ear that blocks such messages.

Upon Coolidge’s early death in January 1933 (just short of age 61), humorist Will Rogers wrote this tribute: “By golly, you little redheaded New Englander, I liked you. You put horse sense into statesmanship.”