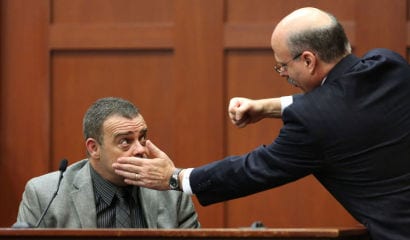 It started by dropping an F-bomb. The prosecution’s case went downhill from there.

The state’s ineptness permeates the entire trial of George Zimmerman, from the over-the-top second-degree-murder charge to the lack of a single African American on the jury.

The prosecution playing video of Zimmerman providing his version of events without having to endure cross-examination demonstrates the level of incompetence. Instead of the cold, emotionless, blank stares of a killer, the jurors saw a likeable, unthreatening, mild-mannered, pudgy man. After demonizing Zimmerman outside of the courtroom, the prosecution strangely humanized him inside of it.

The mumbling and semi-literate Rachel Jeantel proved a stenographer’s worst nightmare. The prosecutors probably now regard her as their nightmare, too.

By testifying that Trayvon Martin referred to Zimmerman as a “nigga” and a “creepy-ass cracker,” Jeantel flipped the script on the racial motivations surrounding the tragedy. She appeared more of a partisan than a witness when she repeatedly told her pausing interrogator, “You can go.” When she admitted that by rushing through a deposition she had compromised its accuracy, Jeantel eroded whatever credibility her behavior hadn’t already destroyed. Like the deposition, and Martin’s wake and funeral that she skipped, Jeantel clearly found testifying a terrible bother. She tapped her fingernails, rolled her eyes, sighed, and when faced with the prospect of appearing on the stand for a second day, declared, “I’m leaving today.” The prosecution should have retroactively granted her wish.

Jeantel came to court to establish that George Zimmerman attacked Trayvon Martin. She instead testified as to the type of person with whom Trayvon Martin associated.

Other state witnesses similarly puzzled. Two cops helped the defense more than the prosecution by testifying that Zimmerman showed no malice toward Martin and that his story remained consistent in important details. The prosecution bizarrely placed the defendant’s best friend on the stand. “He didn’t have [the gun] to go out and commit a crime of hunting someone down and harming them,” Mark Osterman told the court. “It was for self-protection. And I’m glad that firearm was used to protect George.”

When a prosecution witness testifies that he’s happy that the defendant acted the way he did, that’s evidence that the trial isn’t going the state’s way.

What happened to Trayvon Martin in Sanford may not have been criminal. What’s happening to him in court in Sanford might be. No matter which side ones takes a rooting interest in — and this case appears more as a racial sporting event than a trial — it’s difficult not to see the prosecutors as a bunch of Mike Nifong wannabes, sacrificing the interests of justice or even of a conviction in favor of satiating a loud mob.

The client list of Don West and Mark O’Mara dries up if they perform the way their courtroom adversaries do. The prosecutors won’t be out of a job because of this fiasco. Because consequences rarely attach to actions in government, the state incentivizes recklessness.

If your life hung in the balance, would you rather have the state’s attorneys or Zimmerman’s lawyers drawn from private practice? Like the stall in the train station versus the bathroom in your house, a phone booth versus your iPhone, or a ride on a cramped and smelly bus versus one in your Lexus, private beats public nine times out of ten despite the state’s almost unlimited resources. That Rachel Jeantel can’t tell you about the quality of her public school education in cursive tells you all you need to know about the quality of her public school education.