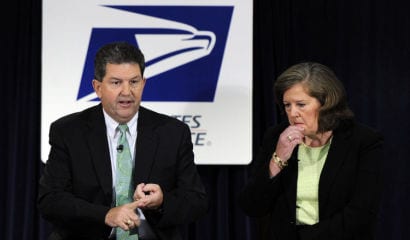 Which is to say, if the “test of a first-rate intelligence,” truly is, as F. Scott Fitzgerald posited, “the ability to hold two opposing ideas in mind at the same time and still retain the ability to function” then scientists will surely be studying Donahoe’s brain for millennia.

Here, after all, is a man who possesses the oppositional faculty to one minute dutifully report the United States Postal Service’s net losses of $41 billion over the last six fiscal years only to moments later wax nostalgic over the very same entity’s supposed “suite of robust and creative initiatives for growing revenue”(!), its “relentless approach to taking costs out of the system”(!!), and the “sacrifices” shared by “our employees, unions, management organizations, and customers”(!!!), all employed with brave perseverance even as it continues to be — cue the violins as Donahoe unfolds the bureaucrat’s Obama-era go-to security blanket — “stymied by the effects of Congressional inaction.”

“We have reduced costs,” Donahoe bragged, “by amounts that most private sector businesses would envy.”

Yes, well…an enterprise able to maintain its precious state-imposed monopoly despite losing $25 million daily might very well evoke a bit of covetousness in certain parasitic corporatists and ne’er-do-well entrepreneurs. And Donahoe is correct to say the Postal Service has “a proven track record,” though I don’t believe it means what he thinks it does.

This obliviousness helps explain the irrational exuberance Donahoe exhibited while unveiling “a robust Five-Year Business Plan” containing “a set of strategies and initiatives designed to close the substantial and crippling budget gap.”

To be fair, the plan’s bullet points are mercifully free of the kind of rhetoric that sank previous well-publicized five-year plans — e.g. dekulakization, labor colonies — heralding instead savings from reducing delivery to five days a week, reforming the “governance model,” and creating saving via allowing the Postal Service to “sponsor its own healthcare plan” — i.e. “By moving away from the federal system, nearly all of our employees and retirees would reap the benefits of getting equivalent or better healthcare coverage and paying less for it.” (Quick — someone tell Donahoe about Obamacare.)

One “service” Donahoe predictably failed to nominate for streamlining is the Postal Service’s taxpayer-funded program to turn every man, woman, and child who sends or receives mail in this country into a potential suspect to be tracked and observed at all times.

…[A] longtime surveillance system called mail covers, a forerunner of a vastly more expansive effort, the Mail Isolation Control and Tracking program, in which Postal Service computers photograph the exterior of every piece of paper mail that is processed in the United States — about 160 billion pieces last year. It is not known how long the government saves the images.

That certainly puts a new spin on the unofficial motto carved into the stone façade of the Farley Post Office building in New York City: Neither snow nor rain nor heat nor gloom of night stays these couriers from the swift completion of their appointed rounds.

How much does such an undertaking cost? It would be interesting to find out. (My hunch is expensive and getting pricier by the day.) And how long before the Keynesians start dreaming of the “job creation” possible if we switched from digital photography to, say, three or four thousand public sector union employees on stools with Polaroid cameras.

Worse, we can’t even thank a Rockwellian whistle-blowing mail carrier for revealing the extent of the spying, but, rather, the pure (yet welcome!) ineptitude that mistakenly delivered handwritten card to an apparent special target noting, “Show all mail to supv for copying prior to going out on the street.”

The Cato Institute has long insisted Congress “should end its micromanagement of the nation’s postal services.” This is an argument that has become more, not less, persuasive in light of recent revelations.

If the NSA fiasco taught us anything, it’s that many private companies will aid and abet the pursuit of Total Information Awareness and its subsequent offspring — especially if such collusion is unlikely to become public. But law-abiding Americans deserve at least a fighting chance at a reasonably priced, less spook-vulnerable “private option” when it comes to personal mail — which is to say, one that doesn’t require the legal hurdle of oversized envelopes and outsized cost. Alas, we’ll never get anything resembling it so long as a decrepit, hulking monopoly tens of billions of dollars in debt is allowed to feed at the trough of a federal government nearly seventeen trillion dollars in debt.