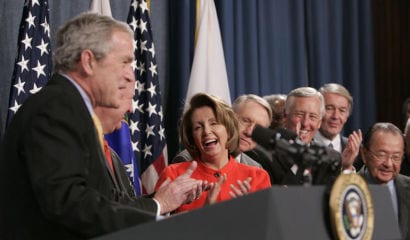 This Town: Two Parties and a Funeral – Plus Plenty of Valet Parking! – in America’s Gilded Capital
By Mark Leibovich
(Blue Rider Press, 400 pages, $27.95)

Three pages into This Town, Mark Leibovich’s tell-all about Washington political culture, and normal people will already be cringing. The scene is a memorial service for Tim Russert at the Kennedy Center. Bill and Hillary Clinton are entering, somberness flash-frozen on their faces, when they catch the attention of a young MSNBC producer. He charges, introduces himself, and asks, with no trace of shame, if Hillary will appear as a guest on Countdown with Keith Olbermann that evening.

Hillary makes a curt remark and brushes past him. But the incident is illustrative; a nexus of Washington’s twin virtues of sycophantic suck-upiness and ostentatious display, embodied by what Leibovich calls “The Club,” a bipartisan clique of politicians, consultants, lobbyists, and journalists who rule the D.C. social scene. In This Town, Leibovich, the chief national correspondent for the New York Times Magazine and admitted member of The Club, sets out to profile and mock insider Washington, with all its excesses and outrages.

The picture that emerges “feeds the worst suspicions anyone can have about [D.C.],” as the Washington Post puts it. Russert’s memorial service devolves into a networking buffet, with several journalists openly jostling for the former anchor’s seat. Harry Reid spends years trash-talking John Kerry behind his back, only to mawkishly declare that he loves Kerry on the Senate floor. Politico journalists sit around and rant about how stupid voters are, then write about each other’s rants in Politico, then brag about being written about on Politico TV. Everything centers on Politico’s Playbook, the gossipy email update and enabling drug of Washington’s insufferable self-congratulators.

A common trope among conservatives is the “cocktail party scene,” which Republican reformers encounter when they go to Washington and which lures them into selling out their beliefs. This Town provides plenty of evidence not only that those worries are grounded, but that it’s far worse than we imagined.

One of Leibovich’s better profiles is that of Steve Schmidt, the Republican strategist who ran John McCain’s 2008 campaign. Schmidt became a dead man walking in Washington after he convinced McCain to pick the dreaded Sarah Palin as his running mate. But fear not: Schmidt would later rehabilitate his reputation by dishing dirt on Palin to the authors of the election tell-all Game Change, which earned him plaudits from The Club. “It was another instance of the media swooning over Republicans with self-flagellating tendencies, especially when they defy conservative orthodoxy and move left,” writes Leibovich. Today Schmidt is a regular on MSNBC. When Game Change was made into a movie, Schmidt was played by Woody Harrelson.

Leibovich’s scorn for operators like Schmidt is unusual and refreshing. Most accounts of What’s Wrong With Washington consist of somnambulant clichés about House Republicans, Who Aren’t Interested In Governing and Are Part Of The Problem. But Leibovich’s targets aren’t ideologues; they’re The Club’s self-inflated moderates and moneymakers. The Tea Party, angry liberals, and even Sarah Palin actually come off pretty well. One of the most sympathetic profiles in the book is reserved for Senator Tom Coburn, the adamantly anti-establishment Oklahoma Republican.

Barack Obama also gets a surprisingly soft pat-down, at least compared to some of Washington’s other players. The president initially portrayed himself as contemptuous of Washington culture. Leibovich buys into this narrative, leading him to write unintentionally (I think) risible sentences like this: “To [Team O], members of The Club were like playactors performing weird pantomimes of the sort that no one in, say, Chicago would engage in.” Yes, nothing calls to mind political normalcy like Chicago. Leibovich later shows the Obama machine being co-opted by Washington, as its advisors vie for TV time and the lobbyists come spinning through the doors.

But that’s a minor shortcoming in a book that’s generally a successful and needed undertaking. Writing This Town must have presented a huge risk for Leibovich, not because he’ll be ostracized (an insider like him will always “have lunch in this town again,” as he freely admits), but because Washington culture just isn’t that interesting a subject. The most glaring characteristic of Leibovich’s insiders, as they preen and clink their glasses and prance across Politico columns, isn’t their power or wealth, as they’d probably prefer to believe, but their unyielding banality. The question ultimately raised most by their actions is: “Who cares?”

Her signature accoutrement is a little video camera she carries around, called the “Tam Cam.” With it, she walks up to people she knows—and who, by extension, matter—and initiates quick little ambush interviews, which she will often put online. The interviews are generally quick and painless, if somewhat intrusive, “like a light enema,” in the words of one friend/victim.

After reading the term “Tam Cam,” my head started to throb in a way suggestive of a malignant brain tumor. Ambush interviews! Elsewhere, Leibovich has compared modern Washington to the novel Bonfire of the Vanities, but at least Tom Wolfe’s social X-rays sometimes behaved colorfully.

Fortunately, Leibovich enlivens his tedious subjects with a funny and vivid writing style (Washington’s booming economy comes from its “ever-widening ‘failing upward’ sector”; Mitt Romney always seemed like “a chandelier was about to fall on his head at any moment”). He does occasionally overapply the snark (his use of the teenage-cheerleader “Whatever” gets particularly grating). But he’s also an engaging storyteller. The last quarter of This Town, which dishes on Leibovich’s encounters with the major players from the 2012 election, is undeniably good reading. And his profile of Kurt Bardella, the former press secretary to Darrell Issa whose insatiable ambition gets him fired and then rehired, even manages to arouse sympathy.

If there is one major criticism to be made of This Town, it’s that it does little to delve into the policy machinery of Washington. Leibovich insists that “Getting rich has become the great bipartisan idea,” and that ideas have taken a backseat to money. That may be true, but plenty of Club members still care deeply about ideas, and those ideas are often destructive. Washington botched the Iraq war and implemented social engineering policies that helped crash the economy. At a time of record debt and economic stagnation, it’s become obsessed with gun control and immigration. How does this happen? Leibovich doesn’t say. He spends 400 pages popping the D.C. social bubble, but he never really explores its intellectual bubble.

Still, the social bubble does matter and few have documented it like Leibovich. If you want to understand why you should wake up quivering with white-hot hatred for elite Washington, This Town is well worth your time.