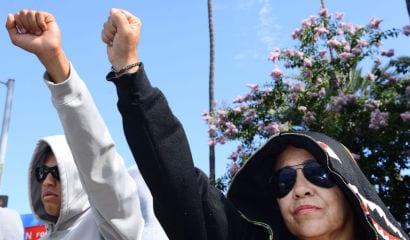 As a black woman in a nation that has taken too many pains to remind me that I am not a white man, and am not capable of taking care of my reproductive rights, or my voting rights, I know that this American god ain’t my god. As a matter of fact, I think he’s a white racist god with a problem. –Professor Anthea Butler

This verdict is a crystal-clear illustration of the way white supremacy operates in America…When Zimmerman was acquitted today, it wasn’t because he’s a so-called white Hispanic. He’s not. It’s because he abides by the logic of white supremacy, and was supported by a defense team — and a swath of society — that supports the lingering idea that some black men must occasionally be killed with impunity in order to keep society-at-large safe. —Aura Bogado

The United States has its first black president (despite Toni Morrison’s previously offering that honor to Bill Clinton).

We have two black Senators and are 43 black members of the House of Representatives (including non-voting members from Washington, D.C. and the Virgin Islands).

Blacks are successful in academia and business, in professional sports and entertainment, and as CEOs of several of America’s largest companies such as Merck, American Express, and McDonald’s.

There are television stations, radio channels, and newspapers devoted to black audiences, and black characters (treated just like characters of other races) are ubiquitous in major TV shows and movies.

This is not to suggest that there are not large, unsolved problems in black communities across the nation, nor that racism does not exist in the impact of nominally race-neutral policy at every level of government and society from schools to prisons to corporations. I, like everyone reading these words, want all of these situations to improve because a life defined by lack of opportunity or inspiration is not solely a tragedy for that person, but also for his family, neighborhood, state, and nation.

But to our country’s true racists, people like University of Pennsylvania Associate Professor of Religion Anthea Butler or the Nation columnist Aura Bogado, the United States is an irredeemable cauldron of white hatred.

Of course, there are fringe elements everywhere, but these people are teaching in our universities and writing for relatively mainstream (even if on the left of the political spectrum) publications. This means that they are infecting many others, including our future leaders attending highly esteemed American academic institutions (Penn is one of the ten oldest colleges in the country), with the cancer of true racism.

These are people who believe, and encourage other gullible liberals and cynical opportunists, young and old, black and white, to believe along with them, in racist (anti-white) propaganda such as Critical Race Theory and White Privilege.

But this isn’t just about harmful-if-silly theories and pseudo-intellectual turns of phrase designed to make the ordinary person feel awed, inferior, and thankful for received wisdom. It’s about our nation, and the fact that race-hustlers far beyond just the most famous few are picking at the slowly-healing deep national wound of racism and making a living selling the blood, drop by painful drop.

How am I, who, unlike Navin R. Johnson, was not born a poor black child, able even to begin a conversation with someone who believes that god (following Ms. Butler’s use of lower case) is a white racist, implying that she is utterly powerless against the omnipotent evil that I, as a white person presumably hold in my heart (even if I don’t know it, apparently)?

How is any well-intentioned white person (which is to say one of the large majority of white Americans) to discuss improving race relations with a person who states publicly that whites in large numbers support the indiscriminate killing of non-whites because we believe ourselves superior? (I wonder what Ms. Bogado thinks the reaction of Jews, like me, will be to her offensive nonsense.)

How is our country supposed to function adequately, even if still imperfectly, among all races with a president who jumps into racially-tinged cases by saying that (white) policemen “acted stupidly” (arresting a black college professor) while admitting a few breaths later “I don’t know all the details to the case,” or by proclaiming “If I had a son, he’d look like Trayvon”? President Obama shot his mouth off before having the details in that case as well, leading the charge to politicize a case that was unusual only in the sense that 93 percent of black murder victims are killed by other blacks.

But such discussions, conversations, and efforts toward racially-cooperative civil society are, for three main reasons, beyond approach with such people:

Few things are more powerful, whether in media, academe, or politics than creating an enemy, even if a man made out of straw, with a demonic expression painted on his face (a white face, obviously).

But — and I can hear the cries of “racist!” already — it’s time to call a spade a spade: No group in America is without its bigots, its haters, its fill-in-the-blank-phobes.

In most of society, such people are rightly shunned, ridiculed, and used as examples of what not to be (except when famous white liberals are hypocritically given their “at least he supported Obama” indulgences).

But among the American left and far too much of the black (and other minorities’) intellectual elite, evincing the sort of seething antipathy for Americans of other skin tones which Andrea Butler, Aura Bogado, and many, many others in even more prominent places have demonstrated in recent days is somehow a badge of honor, courage, and intellect.

Their behavior, were the races reversed, would bring cries of “bigot,” “racist,” or even “Nazi.” Yet they are routinely rewarded with more teaching hours, column inches, media minutes, and even votes.

The American public, including blacks, are coming to recognize (or at least believe) that blacks are (by proportion, not necessarily degree) more racist than whites. While this represents an important insight into American society and a partial explanation for the existence of people like Butler and Bogado (though Bogado is not black), and while it might make some whites feel better, it is no more good news than it would be that some other large group of Americans is, or is perceived to be, hateful of their fellow countrymen.

The same poll suggests that slightly more Americans think race relations are getting worse as think they are getting better. Again, not the sign of a country on a path of healing, and particularly unfortunate in a nation with a black president. But, with such feverish written and spoken words from black leaders and pundits and their white liberal accomplices as we’ve seen since the Zimmerman verdict, it is not surprising that the public can self-diagnose a national infection of anti-white racism.

If our nation is ever to become truly the United States, it is time for liberals and liberal institutions to stop giving cover to people like Butler and Bogado, to stop sanctioning their mindless, hateful divisiveness, and to try to get Americans of all races to understand that most people of each and every color want to treat others, and be treated by others, according to two great statements from American political history, one written by a white man and one by a black man:

“We hold these truths to be self-evident, that all men are created equal.”

“I have a dream that my four little children will one day live in a nation where they will not be judged by the color of their skin but by the content of their character.”

Unfortunately, for too many within the American left and its race-hustling subsidiaries — including the Obama administration — racial harmony poses a threat to their personal gains and professional advancement. Until more people in places of prominence are willing to call out that obvious truth, America’s racial scab will continue its slow, painful bleeding.