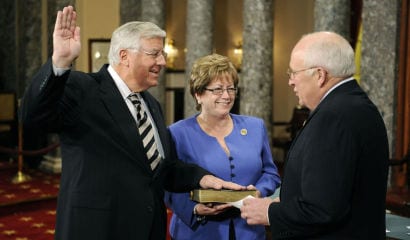 The bespectacled, snow-capped Wyoming Republican is the eighth-most-conservative senator, according to National Journal. He has a 100 percent rating from the National Federation of Independent Businesses and a 93 percent lifetime rating from the American Conservative Union. He voted against Obamacare and declared as recently as four days ago that the law should be dismantled. He opposed the president’s stimulus grab bag and supports a balanced budget amendment. He co-sponsored Rand Paul’s bill to audit the Fed. He’s pro-life and anti-gay marriage.

To be fair, those are positions supported by the lion’s share of Senate Republicans. Enzi tends to vote in lockstep; he’s not a leader like Marco Rubio or an intellectual trailblazer like Rand Paul. His name sometimes gets lost in the wash of Senate GOP foot soldiers, along with “Risch” and “Burr” and the fantastically senatorial “Boozman.” But he’s unquestionably a conservative.

So why did Liz Cheney, the former vice president’s daughter, announce yesterday that she plans to challenge Enzi in the 2014 Wyoming Republican primary? As of now, it’s not entirely clear. Cheney is an occasional Wyomingan at best (Rand Paul quipped that he first thought she was running for Senate in Virginia) and her decision seems to have startled the entire Republican establishment, including Enzi himself.

Cheney circulated a YouTube video in which she appears to be marooned without food or water in a Wyoming field, but nevertheless finds five minutes to explain her Senate bid. She gives few specifics about Enzi, instead sticking to conservative boilerplate rhetoric and trashing the president.

The most common template for a primary challenge in the Republican Party is a fresh conservative challenging a stale establishmentarian who’s viewed as having moved leftwards. But in this case, Enzi has a laudably conservative voting record, and Cheney, however loudly we might cheer at her bon mots on Fox News, is every bit the Washington insider that he is. Her candidacy seems very out-of-sorts for today’s conservatives, flush with populist anger at the political class.

Like any long-serving senator, Enzi has a few apostasies. His spearheading of the recently passed internet sales tax, opposed by many conservatives, is getting the most attention. But overlooked, and far more important, are his divergences on foreign policy, most notably his vote against a $100 billion supplemental funding bill for the Iraq war in 2007, and another $106 billion war spending bill in 2009; he was one of only three Republicans to vote against the former, and one of only five to oppose the latter.

Those votes hint at a deeper political trend. Since 2010, almost all the intellectual energy in the Senate has come from Tea Party lawmakers like Rand Paul and Mike Lee, who tend to be relatively dovish, skeptical of foreign aid, concerned about civil liberties, and contemptuous of neoconservatives. Making the case for an activist foreign policy has fallen largely to Sens. John McCain and Lindsey Graham, both of whom increasingly resemble the aging characters in Kingsley Amis’s The Old Devils, shambling around the Senate chamber and waxing nostalgic about the good old days when they could bomb other countries in peace.

Beyond Rep. Tom Cotton, the neoconservative darling who still staunchly defends the Iraq intervention, there’s little fresh blood among Republican hawks in Congress these days. So perhaps it makes sense for Liz Cheney, the daughter of one of the architects of Bush-era foreign policy, to provide a Senate counterbalance to Paul. Yet even outside her father’s shadow, Liz has serious credibility among super-hawks. Her advocacy group, Keep America Safe, has relentlessly criticized the president’s foreign policy, and her ad attacking Justice Department lawyers who she called the “Al Qaeda 7” outraged both Republicans and Democrats.

Cheney will present a unique challenge to Enzi and the race should be one of 2014’s most fascinating. But for those of us who think the Paul-Lee foreign policy is the way of the future, this might be one time the stodgy incumbent is worth supporting.