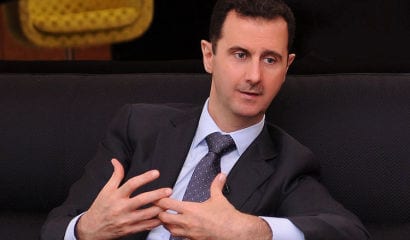 With reports that the death toll in Syria has now exceeded 100,000 people, the Syria we see today is a shell of its former self: a broken country, fragmenting before our eyes, riven with sectarianism and increasingly polarized as the Regime tries to slaughter its people into submission. Unlike the implosions we have seen in other “Arab Spring” countries such as Egypt, Yemen, and Tunisia, Syria is an explosion that is already starting to infect neighboring countries such as Lebanon and will likely continue to destabilize this fragile region.

I first visited Syria in 2006 on one of my first trips to the Middle East as a Member of Parliament. I had the opportunity to meet a cross section of Syrians from politicians to market traders to the Grand Mufti himself. But one person I developed a particular relationship with was President Assad. Over the next five years I met the President several times and always one on one. Our meetings were always candid and ranged over a wide spectrum of regional issues: from the war in Iraq to Israel and the Golan Heights to his support for Hezbollah in Lebanon and of course his relationship with Iran. The President was soft spoken and articulate. He was not a bellicose leader like Muammar Gaddafi or Saddam Hussein.

I have reflected on his character in recent months when considering possible ways forward in Syria and I believe that it is only when he is under genuine pressure that he will reach out and seek to negotiate. I saw this in February this year when I was last in the region where I had some interesting conversations with Syrians connected to the regime in Egypt and Lebanon. They told me that Assad was feeling the heat, the rebels were making considerable gains, and he was ready to engage. Even in recent months, it was thought that the regime would attend the promised conference in Geneva which seems to have now melted out of the conversation. However, with the strength he now feels, the negotiating table is far from his mind. He remains confident and belligerent repeating: “No to surrender, no to submission”; “The captain does not flee his ship during a storm.” With the help of Hezbollah and the Iranian Revolutionary Guard, he has made strategic gains in recent months such as the victory in the Lebanon-Syria border town of Al Qusair. The international community seems paralyzed by indecision when finding a constructive way forward, the Syrian opposition is in a shambles, and with this all in view Assad has no incentive to come to negotiate when he believes he can win.

So how can move forward from here? I would advocate a dual-track approach that squeezes Assad from two angles: diplomatically and militarily. With determined engagement on both fronts, we have a higher chance of making progress within this bleak conflict, in a way that is yet to be seen.

All serious commentators constantly repeat that only a diplomatic solution will sustainably end this conflict. I have always been a strong advocate for talking to all parties within conflict around the world, particularly when it comes to the Middle East where I have traveled widely over the past eight years as an MP. I believe that when parties are included, sustainable longer terms solutions can be found, and it is when parties are excluded they act as “spoilers” when any attempt is made at a solution. A Syrian recently reminded me that this was essential within Syria, with an Arabic proverb which he quoted: “The absent party will be the troublemaker.”

One essential track that I believe has not been fully embraced yet is the engagement of the main powerbroker behind the Assad Regime: Iran. As a sect of Shi’a Islam, the Alawis in Syria are an essential geographical link in the Shi’a crescent that extends from Iran, through Syria to Hezbollah in southern Lebanon. Without Syria, Iran’s influence in the region is massively depleted and for this reason Iran is defending Syria as if it is defending Tehran. Rowhani, who will be instated as Iran’s next President next month, presents a real opportunity for engagement. An opening here which I believed has not yet been capitalized on is to build relations through Turkey, a Sunni ally of Iran. Sunni-Shia dialogue is essential to sustainably address the underlying sectarian rivalries in the region that will haunt the West through rising tensions in countries with a strong Shi’a presence such as Lebanon and Iraq.

The other track that must be taken is to put Assad’s forces under serious military pressure from the ground level. This debate has recently been highly distorted by sensationalist stories and the reality of the numbers has not been understood. Indeed, one number that has been forgotten entirely is the 15 million of Syria’s 22m population — 70% of Syria which constitutes the “silent majority,” who are mostly moderate Sunnis who want to be liberated but need our help. The amount of time devoted to discussion over Islamic extremists within the ranks of the opposition is entirely disproportionate to the numbers they represent. Of the 150,000 opposition fighters, only 5% are within the group affiliated with al Qaeda. The vast majority are moderates, under the command of General Idris, who in fact came together in recent weeks, united under his leadership and condemned the ideology espoused by the radicals. However, the drift to the extremists is understandable. There is a widely used phrase within the conflict in Syria: “Oh God, we have nobody to help us but you” — when people have no hope, they turn to God. The lack of international consensus, paralyzing the international community taking a united stance to prevent the bloodshed, is perpetuating extremism on the ground. Without international support, the moderates are drifting into the ranks of the extremists as the lack of support for their cause is looking increasingly hopeless. This is the problem with doing nothing: inaction bolsters the ranks of the extremists and their presence grows — the specter becoming a reality in a form of self-fulfilling prophecy.

The scale of the tragedy in Syria requires urgent brave decisions on both these fronts: delay and indecision costs lives. Diplomatic engagement is essential to a solution, not only for Syria but also for the wider region, but without military pressure from a ground level, engagement remains a pipe dream.