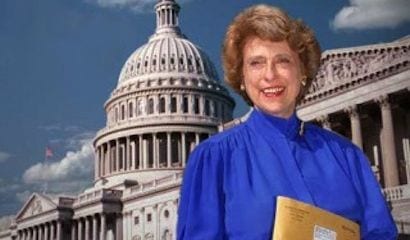 Perhaps the greatest lady in 20th century American politics died at age 97 on Saturday, and her example should instruct conservatives just as much as it does her fellow liberals.

Corinne “Lindy” Claiborne Boggs was the widow of a House Majority Leader; the mother of a mayor and of a nationally known journalist and of a pioneering lobbyist; a nine-term congresswoman in her own right; and ambassador to the Vatican. She had a spine of steel, but also a legendarily velvet graciousness that was far more than just a politician’s surface-level charm. Mrs. Boggs’ kindness ran deep, and her thoughtfulness seemed inexhaustible.

Others will tell of her 60 years in and around public service; perhaps a few glimpses here on a more personal level can help illuminate Mrs. Boggs’ remarkable ability to inspire devotion from people of any and all political persuasions.

My connection with Lindy Boggs was inherited. Lindy Claiborne and Hale Boggs both were in my grandparents’ wedding party, and my grandparents later in theirs. But the politics of the families diverged significantly. Lindy and Hale Boggs embraced the New Deal and other liberal nostrums – but my not-terribly-political grandparents raised a son, my father, who gravitated to National Review conservatism. So it was that, while harboring great personal respect and fondness for Lindy and Hale, my father was a leading volunteer in three 1960s efforts to oust Hale from Congress; my mother pushed me around in a baby carriage in 1964 for Barry Goldwater and for a lawyer named Dave Treen who was challenging Hale.

In 1968, another Treen challenge came within a hair’s breadth of upsetting Hale, and I remember distinctly, even at four years old, the impression that if my parents were for Treen, Hale Boggs must be the “bad guy” – which made it a bit confusing, four years after that, to see my father grieving at the news that Hale had disappeared in a small airplane somewhere over Alaska. When, four years after that, Lindy chaired the Democratic National Convention and my father and my grandparents all beamed with delight at her prominence, my then-12-year-old self began to develop a sense of wonder that a political adversary could nonetheless elicit such expressions of fondness.

Little did I know.

In 1979, during my high-school freshman class trip to Washington, D.C., I finally saw the Lindy Boggs magic up close. As 104 students ate our lunches, the congresswoman took the podium and recounted, with a stunning combination of emotional openness and great dignity, the nightmarish story of how her husband in effect just vanished into thin air – of how she was informed of the news, and how President Richard Nixon consistently shared with her every bit of satellite imagery at his disposal as they searched for the plane or its wreckage, and of how as the days passed into weeks with still no answers, she finally had to accept that her husband of 34 years was not coming back. No definitive finality, no explanation… just the slow-dawning realization that her life had irrevocably changed without any real knowledge of why or how.

High school freshmen are not particularly known for their focus or their willingness to abandon an air of jaded boredom – but every soul in that room was utterly enthralled. There was something in the congresswoman’s mien, some radiance in her delivery, which thoroughly captivated a sea of 15-year-olds, myself definitely included. Political philosophy was transcended, personal grace newly elevated, in my pantheon of values.

Yet, after a whole young lifetime of fascination with Lindy Boggs, it was still another dozen years before I finally spoke to her for the first time in person.

Mrs. Boggs had retired from Congress in 1990, but when I worked as press secretary for Louisiana’s U.S. Rep. Bob Livingston from 1991 through 1996 she was still attending every Louisiana-related event on or near Capitol Hill. The first time I saw her at one of those functions, which tended to occur two or three times a year, I introduced myself – and, from the way Mrs. Boggs responded, it was if I suddenly were the only other person in the crowded room. Lightly grabbing my lower arm, listening intently to all my answers, she unleashed a torrent of questions. How were Sandy and Nellie (my grandparents) doing? How was my grandfather handling his Parkinson’s Disease? Did it keep him/them mostly in their home in Pass Christian, Miss., or did he still make it to New Orleans frequently? Would I please ask Nellie to set up a lunch if/when both she and Lindy would be in New Orleans? How was the writing and teaching career of my uncle Carter (my father’s much younger brother)? Did I see much of my cousins the Dupuys? Was I liking my work on Capitol Hill? Wasn’t I finding that her former colleague Livingston was a great boss? And, back to Carter, of whom she seemed particularly fond, would I be sure to tell him that she asked about him?

Mrs. Boggs exuded warmth and sincerity. And her grandmotherly gaze and focus were so intent that it left me with the sensation of being somehow cherished, even though the lady had never met me a single time before.

(It was only later that I realized that the one person she never asked me about was my father. I think the fact that his efforts in races against her late husband grieved her, so she just wrote him out of her own mind’s script of the two families’ long social ties – but credited me with being my grandparents’ grandson rather than holding my father’s volunteer efforts against me.)

After that first meeting with her, the story always was the same every time we happened to be at the same event: If she spotted me, she wouldn’t wait for me to approach her, but would seek me out, sometimes walking halfway across the room. How was Nellie? How was Sandy? How was Carter? How was my aunt Penny? And she would always say how she wished Nellie would call her; she hadn’t actually seen my grandmother in years.

I left Capitol Hill for journalism at the end of 1996, and President Clinton appointed Mrs. Boggs, at age 81, as ambassador to the Vatican early the next year. But even service an ocean away could not stop her from keeping tabs on her friends from six decades before. As Hurricane Georges roared through the Gulf Coast in 1998, my grandfather finally succumbed to his debilitating Parkinson’s. But with so much attention focused on the cleanup from the storm, word spread quite slowly about his death, and my grandmother herself told very few people in those first few days before local papers could even carry the obituary. Yet somehow – Lord knows how – Lindy Boggs found out and, within maybe 36 hours of Sandy’s passing, she was on the phone (I think from Rome) offering condolences to Nellie. My grandmother, who really had done little to keep up the relationship (“I’m crazy about Lindy, but I’ve just never wanted to bother her since she has so much going on in Washington,” she’d say), was deeply touched and comforted by the call.

It was another death that allowed me to see Lindy Boggs for the final time. Waiting in the long, long line to enter the church in 2005, to honor my great-uncle Homer Dupuy (Nellie and Sandy’s brother-in law), I looked up to see the near-90 year-old Mrs. Boggs approaching. “I’m so sorry about Homer,” she said to me and Uncle Carter, who was with me. Then, immediately: “Is Nellie here?”

Alas, my grandmother, grieved to lose one of the last close family members of her generation, and still waiting for her badly damaged home to be repaired three months post-Hurricane Katrina, had woken up feeling shaky and ill and had cancelled plans to attend the ceremony. Lindy momentarily looked deeply crestfallen. “Well,” she said, “please tell her I asked about her.” And then, turning to Carter, her countenance lighting up as much as a countenance is allowed to lighten at a funeral: “But it is so good to see you again after all these years.”

Lindy Boggs was perhaps the most influential wife of a congressman in the entire 20th century, and then the most influential of trail-blazing women in Congress. She was the legend who could bend Tip O’Neill to her will by whispering in his ear; she was the liberal who refused to abandon her pro-life principles even as “abortion rights” became her party’s dogma; she was a hyper-loyal Democrat who yet always worked to bridge partisan divides. But what made her a great lady was not her politics, but her deep and genuine graciousness and goodness. For all of us, her example is well worth emulating.