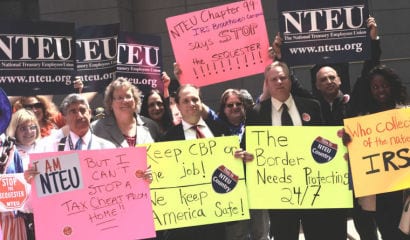 The NTEU also represents the bureaucracy that staffs the Federal Elections Commission. The FEC.

In the last week, Americans have been informed courtesy of The Wall Street Journal among others of an episode involving Lois Lerner, she the now-infamous IRS official who is at the center of the IRS scandal — and who was previously employed in the FEC’s general counsel’s office. The paper wrote up the release from the House Ways and Means Committee of 2008 and 2009 e-mails between Lerner, and her old stomping grounds at the FEC’s general counsel’s office.

The subject of those e-mails between the IRS’s Lerner and her old buds at the FEC? Why, the FEC wanted tax info about certain conservative groups, a distinct legal not-so-good. Wrote the Journal:

Such a request is a no-no in many ways. The FEC staff was investigating these groups without the approval of its commissioners in clear violation of FEC rules. And the IRS is legally barred from releasing confidential tax information — including to the FEC. The emails show that Ms. Lerner asked her staff to provide information to the FEC, and Ways and Means is seeking more documents.

The WSJ goes on to detail:

The suspicion of political motivation is compounded by disclosures this week by Don McGahn, one of three Republican FEC commissioners. He released documents that show a litany of FEC staff abuses — including unauthorized investigations, unsanctioned work with law enforcement, and cases when documents were kept from commissioners. These abuses were largely aimed at investigating conservative political groups.

Read this part of the sentence from the WSJ again: “….a litany of FEC staff abuses — including unauthorized investigations, unsanctioned work with law enforcement, and cases when documents were kept from commissioners.”

Question? Who does all that grunt work at the FEC? Who constitutes the “FEC staff”?

An eye-opening look at the tight relationship between the NTEU and the FEC’s General Counsel Office is provided here in this grievance filing by an FEC attorney. The attorney, one Wanda D. Brown, was seeking a promotion up the career ladder to be a GS-14, and found herself denied. She filed a grievance.

And who came to Ms. Brown’s defense?

Correct. Her union: the NTEU. Specifically, says the filing, the occasion drew a personal appearance by the union leadership in the person of NTEU Executive Vice President Frank D. Ferris, who accompanied a union “Enforcement Division” attorney and the union’s “National Field Representative.” The union “Enforcement Division” attorney, under cross-examination, admitted she was a “work friend” of Ms. Brown.

The filing is an interesting read, and not because of the issue at hand as to Brown’s sought after promotion. What interests here is the role of the NTEU in the internal procedures of the FEC — with a staff attorney turning to a union that gives 90%-plus of its political money to Democrats. To liberals.

The description of “The Parties” in this dispute is a special howl.

Party One, the FEC, is described this way:

And Party Two? The NTEU? The union is described this way:

The Union is the exclusive collective bargaining representative for professional and non-professional employees for the agency.

And what was the result of this grievance filing?

The union won. Their union member got her promotion — and back pay to boot.

Which is to say: the liberal union has clout — big time clout — inside the so-called “independent regulatory agency” that is the FEC. So much clout that when a staff attorney in the general counsel’s office felt she needed professional help to upgrade her career status, she didn’t seek out some independent attorney. She went to the NTEU. And the NTEU carried the day.

Now move from this grievance filing back to the WSJ editorial on the IRS-FEC connection. “Mr. McGahn” refers to Republican FEC Commissioner Don McGahn — the Vice Chairman of the FEC — who is considerably upset about the internal machinery of the FEC. Note this paragraph:

Mr. McGahn also released a memo about his efforts to rein in abuses by getting the FEC to adopt a new manual governing staff enforcement conduct. The memo adds to the list of wild behavior — detailing how staff conducts ad-hoc investigations, sits on exculpatory evidence, and discloses sensitive information to the Department of Justice without commissioner approval. Staff even maintained a policy — undisclosed to commissioners — that granted itself at-will authority to interact with Justice.

Far from expressing contrition, the FEC staff has assailed Mr. McGahn’s reforms. General Counsel Tony Herman wrote in a memo in June that sensitive FEC decisions were best left in the hands of “non-partisan, career leadership.” That nonpartisan riff is a hoot. The White House allies at the Center for American Progress Action Fund have targeted Mr. McGahn for criticism, further highlighting the cynicism of “nonpartisan.”

Note again the information in that last paragraph: “Far from expressing contrition, the FEC staff has assailed Mr. McGahn’s reforms. General Counsel Tony Herman wrote in a memo in June that sensitive FEC decisions were best left in the hands of ‘non-partisan, career leadership.’”

This is “a hoot” as the WSJ observes. And as that grievance filing by an FEC attorney demonstrates vividly.

The fact of the matter is that the decidedly partisan and far left NTEU rules the roost inside the bureaucratic culture that is the FEC — and the IRS. The initials and purpose of the bureaucracies may change — but in point of fact the NTEU is the very same liberal union that has the run of the place in both bureaucracies.

And when the NTEU isn’t representing federal employees? Those federal employees are represented by another union, the American Federation of Government Employees. And the “independent expenditures” of the AFGE in 2012?

You guessed. Not a dime to Republicans or conservatives. Every last penny went to Democrats.

So what happens when you read this sentence above from the WSJ? This one by the FEC Republican Commissioner — the Commission’s vice chair — who detailed internal staff abuses at the FEC? With bold print added this time for emphasis:

The memo adds to the list of wild behavior—detailing how staff conducts ad-hoc investigations, sits on exculpatory evidence, and discloses sensitive information to the Department of Justice without commissioner approval.

And who is all over the internal workings of the Justice Department like white on rice?

Yes indeed, another liberal union that gives its money exclusively — as in 100% — to liberal candidates.

What do we have here?

What we have is a culture of liberalism -– unionized liberalism to boot — inside two agencies at the very center of the IRS scandal. The IRS itself — and now the Federal Election Commission.

The mistake is to think that this is some sort of mere coincidence.

One can look right across the entire federal bureaucracy — from “A” for Agriculture to “J” for Justice to “S” for State Department and find a culture of liberalism. It makes no difference whether the President of the United States — the nominal head of the executive branch of the government — is a Republican or a Democrat, a Bush or an Obama or Clinton. The operative fact of life is that these massive, sprawling bureaucracies are overwhelmingly populated by cultural and political liberals.

This is why stories continually pop up in the media like this one uncovered by Judicial Watch and reported here at the Daily Caller a while back. In which a “diversity instructor” — whose firm was paid $200,000 — was instructing his audience of Agriculture Department employees that “the Pilgrims were illegal aliens.”

This is why J. Christian Adams, the former attorney in the Voting Section of the Department of Justice, writes a book titled Injustice: Exposing the Racial Agenda of The Obama Justice Department detailing the specifics of a Justice Department Adams says is “a base used by leftwing radicals to impose a fringe agenda on the American people.”

This is why State Department employees raced to cover up Benghazi.

And don’t forget the Department of Health and Human Services. That agency is so big it takes both the NTEU and AFGE to represent all its employees — including, of course, all those busy bureaucrats writing all those thousands of pages of Obamacare rules and regulations.

One could go on endlessly here — but the point is quite simple.

The federal bureaucracy — no matter the department or agency — is in fact nothing more and certainly nothing less than a culture of liberalism.

Whether tartly telling a Republican FEC Commissioner — in the style of Washington “nonpartisanship” the Commission’s Vice Chairman — that he needs to keep his nose out of FEC business best left to “non-partisan” — read NTEU — employees or listening to a $200,000 “diversity instructor” or covering up Benghazi or writing the rules of Obamacare, liberalism has the run of the entire federal government apparatus.

Coming next week is Mark Levin’s new book, The Liberty Amendments: Restoring the American Republic. He has posted the first chapter at his website. And one of the very first things the cover says is this:

For a century, the Statists have steadfastly constructed a federal Leviathan, distorting and evading our constitutional system in pursuit of an all-powerful, ubiquitous central government. The result is an ongoing and growing assault on individual liberty, state sovereignty, and the social compact.

Say again “a federal Leviathan, distorting and evading our constitutional system in pursuit of an all-powerful, ubiquitous central government..”

When Americans learn that Lois Lerner of the IRS has been canoodling with the FEC’s general counsel’s office, that an FEC Commissioner is charging the FEC bureaucracy with a series of staff abuses and draws a sharp rebuke from the “non-partisan” FEC general counsel, when Americans learn of all the behind the scenes machinations of the IRS union which is also the FEC union — what they are learning is simply the latest example of how the culture of liberalism plays itself out inside the bowels of the federal government.

Mark Levin’s new book was written before this latest revelation about Lois Lerner and the relationship between the IRS and the FEC. Yet he has called the problem exactly. The Lerner/IRS/FEC episode is but the latest episode in “an ongoing and growing assault on individual liberty, state sovereignty, and the social compact.”

That is exactly the problem.

And it is a very, very big problem.