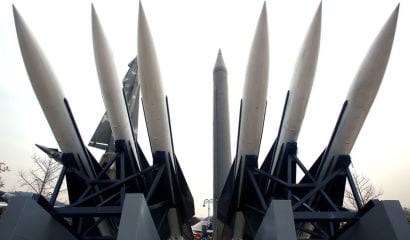 Sixty years ago the Korean War ended. No peace treaty was ever signed and over the years North Korea publicly repudiated the armistice at least ten times. Thus, the parties technically are still at war, though no one wants to restart a conflict in which everyone would lose.

Pyongyang is a great international mystery. What makes the system of monarchical communism tick? How are decisions made? What are the chances for change?

But there is a bigger question much harder to answer. Why is the U.S. still involved on the peninsula, threatening and threatened by the North?

America’s role started as an afterthought, with Washington and Moscow dividing what was then a Japanese colony after Tokyo’s surrender. The onset of the Cold War led to two hostile regimes, separated along the 38th Parallel. The Truman administration refused to arm its client state with heavy weapons, given South Korean President Syngman Rhee’s threats to march north. Joseph Stalin had no such compunctions about his ally.

The U.S. inked a defense treaty with the ROK — backed by a tripwire military presence along the Demilitarized Zone. American dominance was so complete that the U.S. ran the Combined Forces Command, possessing operational command of the South Korean military in both peace and war. It was an extraordinary surrender of national sovereignty by Seoul.

Military control still ultimately rests with Washington even though the South is nothing like the impoverished wreck that was nearly swallowed by the DPRK. South Korea found the secret to economic success in the 1960s and has been growing ever since. Today it sports one of the world’s 15 largest economies. The country is an able hi-tech competitor; its products circle the globe. Both Russia and China trade far more with the ROK than the North.

In contrast, the DPRK has lagged dramatically. Reliant on Stalinist economic policies and collectivized agriculture, its people suffer persistent malnutrition and occasional starvation. Even Pyongyang’s military is technologically backward. The North has welshed on its foreign debts and provided an inhospitable environment for foreign investment, even from the PRC. The South enjoys a 2-1 advantage in population, 40-1 advantage in economic strength, and overwhelming advantage in international support over North Korea.

So why is America still defending the ROK?

In answer the Wall Street Journal declared that “the world is dangerous and America is the main check against global rogues.” However, the world surely is not as dangerous as during the Cold War, when what Ronald Reagan called the “Evil Empire” occupied Eastern Europe and supported a plethora of Third World dictatorships around the globe. The global organizer is gone, leaving only a few disconnected imitators. While the DPRK continues to rely on energy and food aid from Beijing, the former is essentially alone, one of the reasons it maintains an oversize military.

Still, the U.S. acts like the “main check against global rogues.” But it need not do so. America’s Asian and European allies are prosperous and populous; they can defend themselves against the few “rogues” in their neighborhoods. Washington continues to act as guardian out of a combination of ego and habit rather than necessity. Nowhere is the power balance as lopsided as on the Korean peninsula.

Yet Seoul hasn’t created an adequate deterrent capability. The ROK doesn’t even command its own troops when it most matters.

In 1994 the South finally reclaimed peacetime command. In 2006 Seoul agreed to take over wartime command in 2010, successively delayed to 2012 and 2015. Now the Park government wants an indefinite delay.

There are technical issues, of course, but none beyond the capabilities of a country that has proved its competence in virtually every other field. The request may be as much political as military. The Journal acknowledged: “There is also concern in Seoul that if the U.S. hands off operational command of South Korean troops, it may be tempted to dial back the overall security commitment.”

This obviously bothers the neoconservative editors. But in case the Journal hasn’t noticed, the South is far stronger than the North. And, as the Journal has noted, Washington is effectively bankrupt. Isn’t it time for the U.S. to “dial back” more than one security commitment when its allies long ago should have graduated from America’s defense dole? Why shouldn’t South Koreans work as hard to defend their nation as Americans work to defend it?

The North’s nuclear program doesn’t change the equation. Seoul helped pay for Pyongyang’s nukes, transferring an estimated $10 billion to the DPRK as part of the “Sunshine Policy.” If the two Koreas reopen the Kaesong Industrial Complex, that will mean another $90 or more million going north every year. The ROK should not complain about a weapon that it indirectly helped develop.

In any case, America’s conventional presence only provides nuclear hostages for the North. Deterrence comes from weapons located elsewhere. Nor is it obvious that Washington should forever keep its allies disarmed if the North is determined to acquire a growing nuclear arsenal. Nuclear nonproliferation is like gun control, leaving only the bad guys armed. Pyongyang, and its economic backstop, China, might reconsider their current policies if the South and Japan both seemed likely to follow the DPRK’s lead.

However, the easy first step for Washington should be to insist that Seoul take on the normal responsibilities of a normal country and command its own forces in war as well as peace. Then the U.S. should develop an orderly plan to speedily turn full responsibility for the ROK’s security over to Seoul, refashion the military relationship to reflect mutual cooperation rather than South Korean dependency, and withdraw all U.S. troops.

There are few spectacles more perverse than an otherwise confident and independent nation determined to maintain its unnatural dependency on another country. Six decades after the close of the Korean War, Washington should announce that more than enough time has gone by for the ROK to take charge of its own military. And that should be only the first step toward turning full responsibility for South Korea’s defense over to Seoul.